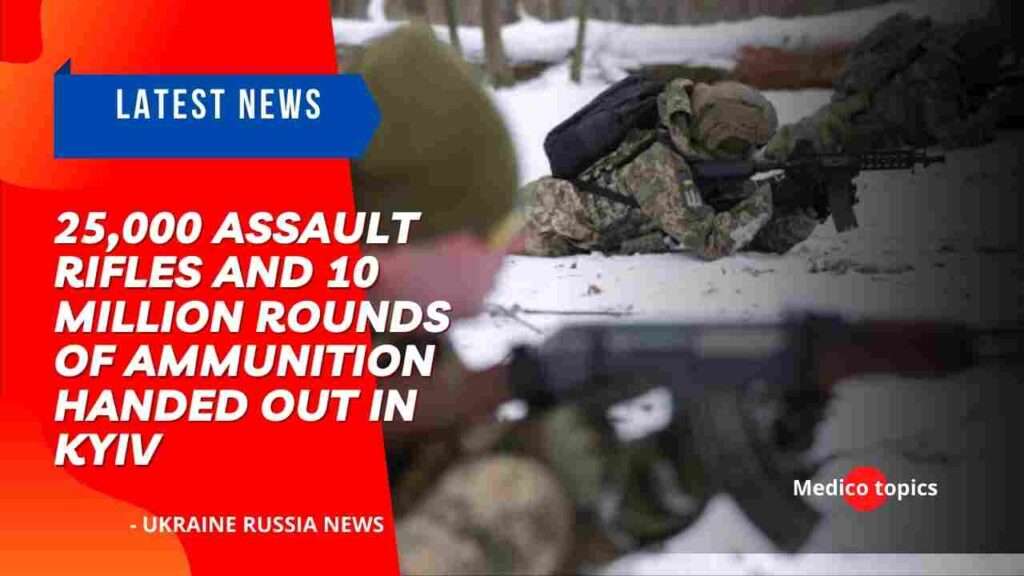 Assault rifles handed out in Kyiv: In Kyiv, the fighters of the territorial defense were given weapons. About 25,000 machine guns and 10 million rounds of ammunition were issued.

This was reported by Denis Monastyrsky.

“Greetings to everyone. I’m in Kyiv. We are working and organizing a complete defense against the DRG, the issuance of weapons. More than 25 thousand weapons and about 10 million rounds of ammunition, RPGs, grenades have been issued. Kyiv will definitely defend itself! Defend and fight to the last!” Monastyrsky wrote.

“I am proud and see how people defend their cities, their villages, their streets, their homes. They organize themselves so that there is no looting and robbery because the police are now working, among other things, on countering the DRG. We find and give them heat “. Together with the military, we form a reliable rear defense. Thanks to all our border guards who were the first to face the fight, our National Guardsmen, our policemen, our rescuers,” he added.

Recall that Klitschko called on businesses to help people in shelters, hospitals, and defenders. (Assault rifles handed out in Kyiv)

“We must endure!” Klitschko urged businesses to help people in shelters, hospitals, and defenders

The mayor of Kyiv turned to business representatives with a request for help in confronting the Russian occupier.

It is reported by the KSCA.

On the morning of February 26, Vitali Klitschko called on businesses to help the people of Kyiv in shelters, hospitals, and defenders from the terrorist defense.

“I also appeal to business. The city is doing everything it can today. Help the people of Kyiv too. They are trying to destroy Kyiv and our country. We must survive!” – stressed the mayor.

It is reported that PJSC “Kyivkhlib” has already responded to the request of the city authorities, which provides its products to people in the metro. Volunteers also bring water and other products to the metro.

0
Reply
Ukraine filed a lawsuit against Russia in The Hague

0
Reply
The situation in Kherson right now: what is happening in the city

0
Reply
Kuleba on negotiations with Russia: when there will be a new round is still unknown

0
Reply
Flow of people and humanitarian supplies: What is the situation in Lviv now

0
Reply
What is happening in Mykolaiv now? The situation in the city

0
Reply
What is happening in Chernihiv now? The situation in the city!

0
Reply
Russia is not able to take cities, therefore it bombs them like in Syria and Chechnya, - Borrell