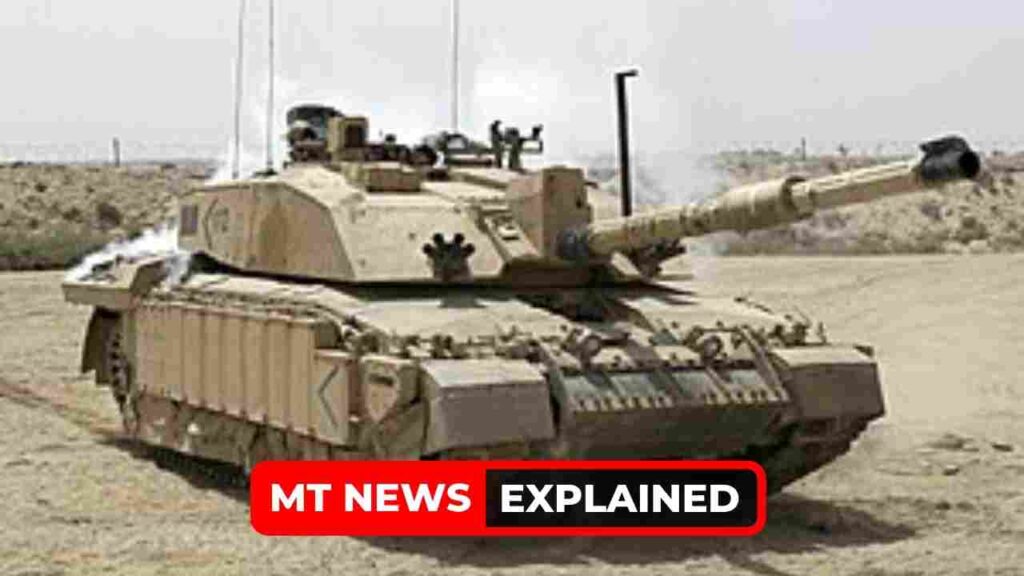 The UK is considering sending British tanks to Ukraine for the first time to help the country fight off Russian invaders. Let’s see more about the Challenger 2 tanks in detail.

Discussions have been ongoing “for a few weeks” regarding transferring some Challenger 2 main battle tanks from the British Army to the Ukrainian military, according to a Western source with knowledge of the conversations.

Such a step would represent a significant increase in Western support for Ukraine and would encourage other NATO allies, especially Germany, to take similar action.

According to a Ukrainian source, it would inspire other countries to donate tanks.

UK reportedly considering sending 10 Challenger 2 tanks to Ukraine. This is mostly about convincing/giving cover to Germany to send Leopards. Scholtz doesn’t want to be alone or first in providing MBTs https://t.co/HjP1ZD9tPF

The Rishi snacks administration has not yet taken a final decision, but if it were to do so, the UK would be the first country to agree to the delivery of potent Western tanks to the Ukrainian military.

The next meeting of a US-led coalition of over 50 countries, including the UK, which is providing military assistance to Ukraine, is scheduled for January 20. Any statements of additional support, such as tanks, may be made to coincide with the Contact Group meeting.

Britain might provide about 10 Challenger 2 tanks—enough to outfit an entire squadron.

According to the source, while this action alone would not be a “game changer,” it would nonetheless be of enormous significance because it would break down a barrier that had previously prevented allies from providing Western tanks to Ukraine out of concern that they would be perceived by Russia as over escalatory.

With over two decades of proven combat experience, Challenger 2 is one of the UK’s most reliable armoured vehicles.

Now, DE&S is upgrading this impressive tank to become the new and improved Challenger 3. Delivering the edge to the @BritishArmy. 🇬🇧 pic.twitter.com/fR4QH3WZK0

This could prompt other allies to do the same, according to sources.

The Ukrainian source claimed that “It will be a good precedent to demonstrate [to] others – to Germany, first of all, with their Leopards… and Abrams from the US.

The UK Ministry of Defence has neither acknowledged nor denied that the government is sending tanks to Ukraine.

‘The government has committed to match or exceed last year’s funding for military aid to Ukraine in 2023, and we will continue to build on recent donations with training and further gifting of equipment.’

‘We have provided over 200 armored vehicles to Ukraine to date – including Stormer vehicles armed with Starstreak missiles. We have also donated tens of thousands of items including helmets and body armor, mobility and logistics vehicles, anti-tank weapons, air defense missiles and systems, winter and medical equipment.’

What are Challenger 2 tanks?

Third generation British main battle tank (MBT) in service with the militaries of the UK and Oman is the FV4034 Challenger 2 (MOD designator “CR2”).

The L11 gun used on the Chieftain and Challenger 1 has been replaced with the 120 millimeter (4.7 on) long L30A1 tank gun on the Challenger 2.

A hydraulic track tension and second-generation Hydrogas suspension are installed. The top road speed is 59 km/h, and the top cross-country speed is 40 km/h. The range is listed as 450 km on the road and 250 km off the road.

The Challenger 2 Life Extension Project, which aims to push back the period when the tanks are no longer in service by ten years, has been advanced thanks to a contract that the Ministry of Defense (MOD) gave to BAE Systems and Rheinmetall Land Systeme.

In order to boost its ability to battle at night, Black Night is outfitted with two separate night vision systems.

The Challenger 2 main battle tank entered service with the British Army in June 1998, and the last of 386 tanks were delivered in April 2002. Deliveries to Oman were completed in 2001.

Kosovo and Bosnia have both witnessed the operational use of Challenger 2. During Operation Iraqi Freedom, British Army Challenger 2 tanks were put into active action.

The UK Ministry of Defense announced intentions in July 2004 to reduce seven Challenger 2 armored squadrons (about 100 tanks) by March 2007. The transformation of one Challenger 2 regiment into an armored reconnaissance regiment.

The most recent development model, Challenger 2E, is appropriate for tough environmental and climatic conditions and was created for the export market. Numerous trials of the 2E have been conducted in Greece, Qatar, and Saudi Arabia.

A contract to create a new smoothbore 120mm cannon for the British Army Challenger tanks was given to Land Systems in January 2004.

As part of the agreement, a Challenger 2 was outfitted with a Rheinmetall L55 smoothbore cannon similar to the one used on the Leopard 2A6 tank and started conducting firing tests in January 2006.

The L30 cannon is protected with a thermal sleeve and built of electro-slag refined steel (ESR). It has fume extraction and a muzzle reference system installed. The weapon elevation range is from -10° to 20°, and the turret can rotate 360°.

There is the capacity for 50 120mm projectiles, such as high-explosive squash heads (HESH) or smoke rounds, or armor-piercing fin-stabilized discarding sabots (APFSDS).

Depleted uranium (DU) rounds with stick-charge propellants can also be fired from the L30 gun. The L30 is a component of the Charm 3 gun, charge, and projectile system together with the DU round.

An all-electric gun control and stabilization system from BAE Systems is used to control firearms. A Boeing 7.62mm chain gun is also included in the Challenger 2 tank. A 7.62mm GPMG L37A2 anti-air machine gun is mounted atop the cupola of the loader.

Five L8 smoke grenade dischargers from Thales AFV Systems Ltd. are mounted on either side of the turret (formerly Helio Mirror Company).

By injecting diesel fuel into the engine exhausts, the Challenger 2 tank is also capable of creating a smoke screen.

The platform battlefield information system application (PBISA) for the British Army Challenger 2 tanks is being provided by General Dynamics UK.

The commander’s display, an inertial navigation system, and digitization are all integrated by PBISA. Some of the software and system integration are handled by Land Systems.
In service since December 2005 is PBISA.

Early in 2006, Challenger tanks equipped with the technology were sent to Iraq.

The commander is equipped with a SAGEM panoramic Vs 580-10 gyro stabilized sight (formerly SFIM Industries).

An intermediate assembly includes a laser rangefinder. The range of elevation is 35° to -35°.
Eight periscopes at the commander’s station offer 360-degree visibility.

The sensor is of UK TICM 2 common modules. The gunner and commander’s sights and monitors show the thermal image at magnifications of 4 and 11.5.

The gunner uses a stabilized Gunner’s Primary Sight from Thales Optronics that includes a visual channel, 4Hz laser rangefinder, and a display. The 200m to 10km range of the laser rangefinder is available.

⚡️UK considering supplying Ukraine with British tanks for the first time to fight Russian forces – sky news, citing a western source with knowledge of the discussions

How did Cassie James die? Mighty Radio Presenter Cause of death Explained

How did Nalinee Seelal die? Newsday crime reporter cause of death Explained