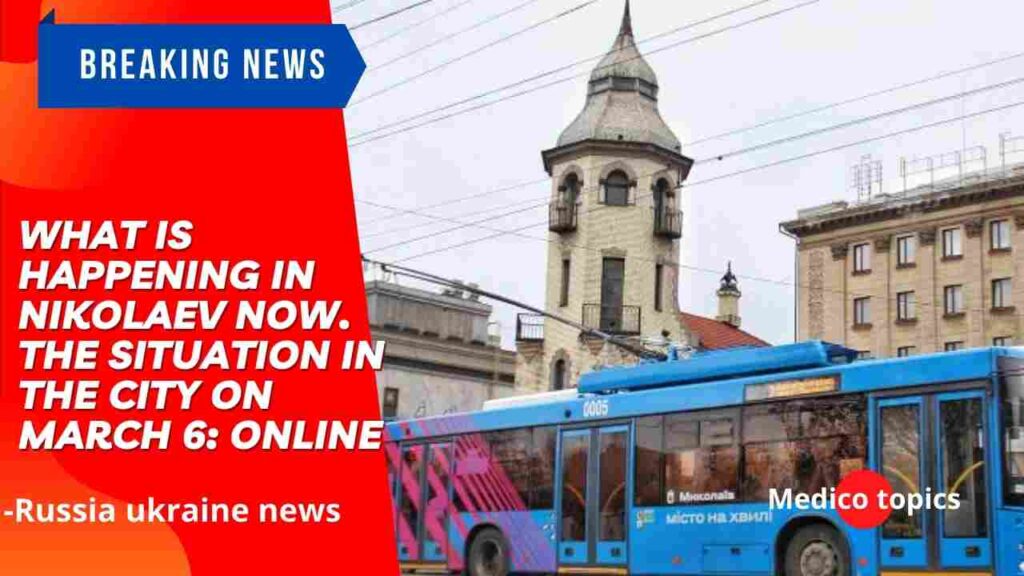 The situation in Mykolaiv: On the tenth day of the war between Russia and Ukraine in Mykolaiv, bridges were opened for an indefinite period. Fights with saboteurs are going on in the city and on its outskirts. Our military and territorial defense are not going to give up positions.

More information about what is happening in Mykolaiv right now, all current information and important news for city residents – in the text online Medico topics.

All the details of Russia’s invasion of Ukraine, the situation in the cities, information about what is happening in different regions, and the reaction of the world. (situation in Mykolaiv)

22:32 “We are canceling the air raid alert. It seems that the enemy wants us to stay awake. We are on patrol, and you are sleeping. We are working and our mood is improving every day because we have prospects,” the head of the OVGA said Vitaly Kim.

17:07 The head of the Mykolaiv Regional State Administration reports that today is a fairly calm day in the city. But Russian troops are angry and more aggressive.

“They have a big shortage of fuel. Today there was an attempt to enter from Kulbakino, but it looked like they maneuvered and did not even go into battle. They move again and pretend to attack to make us nervous. They are moving in the direction of Voznesensk and Yuzhnoukrainsk “Today we stole a lot of equipment. Now she will drive around the city, don’t shoot. We understand that we must deplete their strength. They have no fuel, no motivation,” he said.

16:10 GSChS is engaged in mine clearing of private households of the Mykolaiv area. People report about the ammunition that remains after shelling by Russian troops.

16:05 Mayor of Mykolaiv Alexander Senkevich showed in the morning how the city is preparing to meet the enemy.

13:00 Vitaliy Kim, head of the Regional State Administration, reported on the progress. Mykolaiv holds the defense and reflects the enemy.

11:50 The invaders launched a tank attack on Mykolaiv. APU took the fight.

10:35 The situation in the city and the region is as follows:

09:45 GSChS of the Mykolaiv area reports that enemy attacks of residential quarters and in the suburbs of the regional center led to 7 fires, from the 4 in houses.

In addition, as of 08:00 on March 6, 56 requests for the discovery of explosive objects were received. All addresses will be worked out by pyrotechnicians. (situation in Mykolaiv)

09:10 In Voznesensk, the situation is under control:

00:05 There were three salvos from the Russian Smerch installation on the positions of the Armed Forces of Ukraine in Mykolaiv. All three pass. We have three wounded. In response, the Ukrainian fighters fired one volley.

“In total, the orcs have 300 wounded and 70 dead. That’s the difference between the quality of our troops. Don’t overestimate them!” Vitaly Kim said in a video message. (situation in Mykolaiv)

23:20 The Ukrainian army is arming itself at the expense of the Russian invaders.

“Maybe in a couple of days we will have a boat or a helicopter – we’ll see. Indeed, we arm ourselves at the expense of them and we shoot them down with the same weapon,” says the head of the Mykolaiv Regional State Administration.

Kim also noted that he is optimistic because the residents of the region and the mayors of the cities will not give the invaders any chance of winning.

20:50 On the air of UA at once, the mayor of Mykolaiv Alexander Senkevich said that the city is surrounded from all sides – from the side of the Kherson region and from the Mykolaiv direction of the Kirovohrad region.

Also, in the suburbs on March 5, they fired from lunch to evening, hit even the central district, rockets flew into the private sector. The Russians shot at checkpoints, there are dead people there.

During the attacks, the occupiers used “cluster” shells aimed at defeating manpower and “Hurricane” systems. In addition, there was an attempt at a tank breakthrough. She’s been beaten off!

This was announced by the official Telegram channel of the Mykolaiv Regional State Administration.

According to the head of the Mykolaiv Regional State Administration, Russian Tu-22s will fly over the city.

18:00 In Mykolaiv, the enemy was completely driven out of the city: a photo and video of the heroic defense of Ukrainians are available at the link. (situation in Mykolaiv)

17:29 In Mykolaiv, the guards, together with the Armed Forces of Ukraine, destroyed the Russian reconnaissance group. At the entrance to Mykolaiv, the armored car of infidels “TIGR” was destroyed.

The soldiers managed to capture 4 servicemen of the Russian Federation from the reconnaissance group (of which 1 officer). The prisoners were handed over to the SBU officers.

16:40 According to the head of the Mykolaiv regional military administration, there are no invaders in the regional center. All Russians threw their heels in the direction of Kherson. Retreating, the terrorists killed two civilians – a father and son…

Kim says that the Russian soldiers are hungry, and therefore they can come to civilians in the surrounding villages for food.

“Feed them and then carry out civil detention and hand them over to the UAF,” he advises. (situation in Mykolaiv)

16:00 In the Mykolaiv area the Ukrainian defenders brought down 4 enemy Mykolaiv. They also shot down another plane of the Russian army. The pilot was taken, prisoner. Kim showed some results of the excellent work of the Armed Forces of Ukraine: 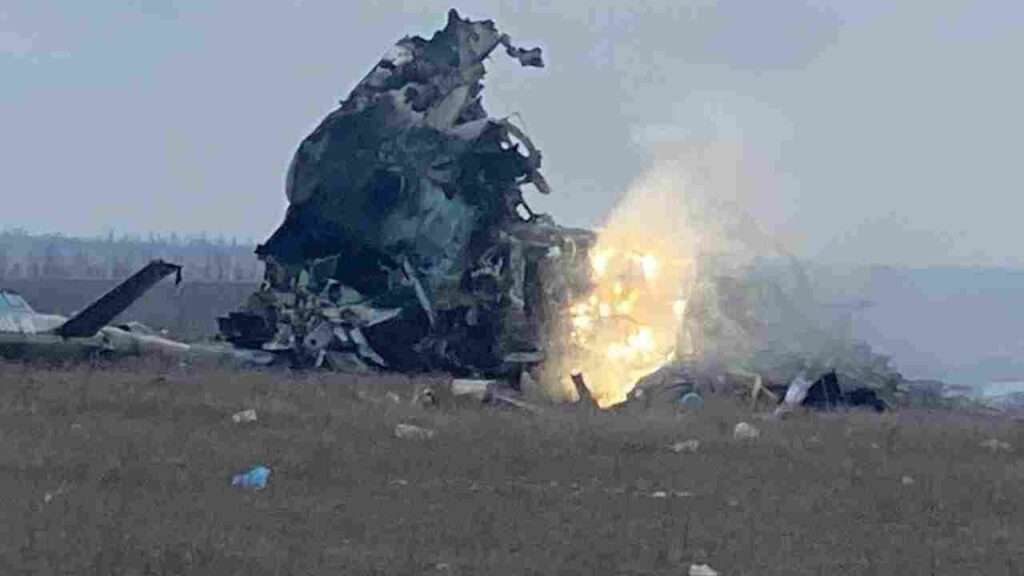 14:00 Vitaly Kim said that “troops are approaching and shooting, but we are currently working as usual.”

“Don’t panic! Now there is equipment from Kulbakino with the letter “Z”. This is the equipment we captured,” he said.

08:30 The night of March 5 in the Mykolaiv region was generally calm, but the invaders are gathering their troops, said Vitaly Kim, chairman of the Regional State Administration.

07:20 In Mykolaiv, the sounds of explosions are heard, which thundered from the southern part of the city.

05:00 Secretary of the National Security and Defense Council of Ukraine Oleksiy Danilov admits that Mykolaiv is one of the busiest destinations today.

“But the enemy is shocked by the capabilities of our military, he gets it in the teeth,” adds Danilov.

03:05 Explosions are heard in Mykolaiv!

23:50 In the Nechayansky territorial community, a car was confiscated from a curfew violator and handed over to the Armed Forces of Ukraine.

“Why are you interfering with an order, not fulfilling the elementary conditions of the curfew. I think that an extra vehicle of our army will not interfere,” commented the head of the community, Nikolai Vivchar.

22:20 There are no Russian troops in Mykolaiv. The enemy was driven back, but not neutralized. According to Vitaly Kim, the occupiers withdrew from the Kulbakinsky airfield to the Mykolaiv aircraft repair enterprise “NARP”.

21:50 The Mykolaiv mayor said that at present there is no mass penetration of Russians into the city. It is possible that some DRGs are working, which are now being worked out by the police, the SBU, and the National Guard along with the TerO.

“The bridges in the city have been drawn up and mined. If the occupier breaks into the city and tries to build them, they will be blown up. Tomorrow the bridges will be brought down. We will look at the situation. The bridges are brought down only by order of the military administration,” Alexander Senkevich said in his evening video message.

Senkevich also gave a forecast for the night.

“It seems to me that today we may have air or missile strikes. Preparations for entering the city and for city wars,” the mayor said. (situation in Mykolaiv)

18:15 Orcs are no more! Ukrainian soldiers recaptured the Kulbakino airport in Mykolaiv and raised the national flag there!

The situation in Mykolaiv on March 6

“We are now united, we are working with all political forces. Everyone is in the ranks, everyone hates Russians, loves Ukraine. Here, I think, our positions are only strengthening,” Vitaly Kim, head of the Mykolaiv regional military administration, wrote on Facebook.

The movement of transport can be monitored in the CityBus and EWay mobile applications.

Medical institutions of Mykolaiv are ready to provide emergency care 24/7 – they are all provided with medicines, food, and work as usual. In particular, there is a supply of insulin.

Endocrinologists are working, prescriptions are being written remotely. In case of emergency, the necessary assistance will be provided.

Important! If the bridges are raised, then pregnant women can get help in the Mykolaiv Central District Hospital, which is located in the Varvarovka micro-district. In addition, an ambulance team is deployed in the Solyanye micro-district, and a family outpatient clinic operates in the Severny micro-district, where you can get help.

Addresses of pharmacies in Mykolaiv

Official sources of information in Mykolaiv and the region

Residents of Mykolaiv can additionally learn about the announcement of the alarm or its cancellation from radio stations and from the Mykolaiv cable television network.

[…] What is happening in Mykolaiv now? The situation in the city […]

0
Reply
How did Lynda Baron die? What happened? Cause of death explained

[…] What is happening in Mykolaiv now? The situation in the city […]

Nurse Anna with mother and sister Ira and baby Bogdan are trapped in a house near Nikolaev needing food and water!!!