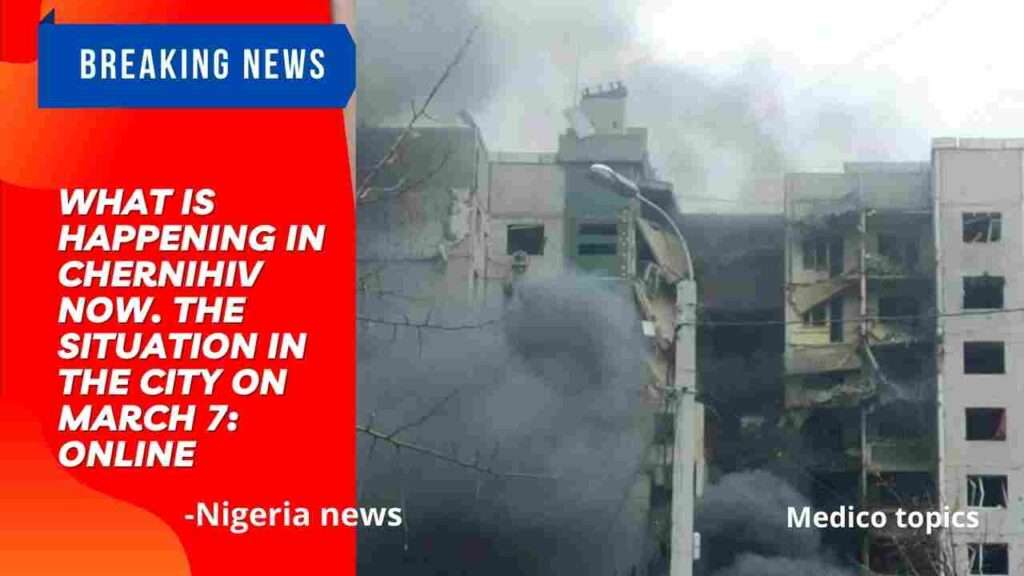 The situation in Chernihiv: For many days now, Chernihiv has been under attack from the Russian invaders. But every time the city emerges victorious in the struggle for freedom.

More information about what is happening in Chernihiv right now, all current information and important news for city residents – in the online material Medico topics.

All the details of Russia’s invasion of Ukraine, the situation in the cities, information about what is happening in different regions, and the reaction of the world.

18:27 Near Pryluky, the Ukrainian military destroyed the rear column of the invaders. Advancing on Kyiv without fuel will be a little problematic.

18:00 Rescuers continue search work at the site of a house destroyed by Russian missiles on Chornovil, 15 V…

15:50 Chernihiv regional blood center will not work on March 8.

14:44 In the Chernihiv region, the invaders began to throw away Russian passports and run away. Documents of officers of the Russian army were also found. Rangers and partisans are asked to help in the capture of criminals.

14:32 Signatures are being massively collected throughout the Chernihiv region under appeals to the leaders of the United States, France, Germany, and other NATO countries with a request to introduce a no-fly zone over Ukraine. For the past few days, Chernihiv has been shelled almost continuously from the air.

10:08 According to Chernigovoblenergo JSC, 110 settlements of the region remain without electricity due to hostilities. Restoration work is carried out as far as possible, the regional state administration reported.

08:58 In Chernihiv at night, during the shelling, Putin’s invaders destroyed several schools and kindergartens and also fired at infrastructure facilities. The city is working on the restoration of oblenergos, the damage is also eliminated by gas services, said the head of the Chernihiv Regional State Administration Vyacheslav Chaus. (Situation in Chernihiv)

07:26 The head of the Chernihiv Regional State Administration Vyacheslav Chaus reports that the department’s website is temporarily out of service due to lack of electricity. Work is underway on restoration. You can follow the news of the State Administration on social networks:

05:04 According to the operational information of the General Staff at 00:00, Russian troops are trying to provide a tactical advantage in the region.

“In the Seversk direction, the infidels are trying to provide a tactical advantage for reaching the eastern outskirts of Kyiv through the Brovarsky and Boryspil regions, as well as establishing control over the cities of Chernihiv and Sumy. The enemy continues the offensive operation against Ukraine, concentrating its main efforts on the encirclement of the cities of Kyiv, Kharkiv, Chernihiv, Sumy, and Mykolaiv,” the message says.

22:12 The forces of the Troop “Sever” of the Armed Forces of Ukraine reported that the enemy is dropping artillery guidance beacons from drones on the positions of the Ukrainian military and critical infrastructure facilities.

20:44 At the moment, an air alert has been declared in Chernihiv. Shelling continues in all micro districts of the city, citizens are asked to stay in shelters.

17:24 Suspіlne Chernihiv talks about the fact that the city receives humanitarian aid – food, medicines, and other necessary things. Due to the threat of shelling, the trucks are immediately unloaded. (Situation in Chernihiv)

According to the head of the Regional State Administration, help comes from Kyiv and the western regions. He also said that shops in the city are open, but the issuance of products to one person is limited.

15:28 The list of pharmacies that work today in Chernihiv and the region can be viewed at the link.

10:01 Air raid alert canceled. But shelling or an air raid can be repeated at any moment. Be ready.

08:00 Due to the hostilities, 141 settlements of the region remain without a power supply in the region. Restoration work is carried out whenever possible.

06:15 Russia is dropping bombs intended for fortifications on houses in Chernihiv … Three unexploded bombs were found at the crash site of a Russian Su-34 bomber, which was shot down near the city by air defense fighters.

00:05 Mayor of Chernihiv Vladislav Atroshenko appealed to the townspeople with a call for resilience and courage to endure these difficult days. He also thanked the public utilities for their selfless work in such a difficult time.

22:20 An interrogation of a Russian pilot shot down near Chernihiv appeared. In the video, the Russian pilot said that he knew perfectly well that he would bomb a peaceful city.

19:20 Today, in the Chernihiv region, units of the operational command “North” defeated enemy forces, which once again prevented their advance towards the capital of Ukraine.

13:50 The plane that was shot down over Chernihiv on March 5 was shelling the city with high-explosive aerial bombs – FAB-500. Three more such bombs were found near him.

11:55 17 people died in the Chernihiv region over the past day as a result of shelling, 1 person because of the fire.

11:45 A few minutes ago, in the vicinity of Chernihiv, air defense specialists shot down another enemy attack aircraft.

Now the military is looking for ejected pilots. (Situation in Chernihiv)

08:30 March 05 in Chernihiv confirmed the intention to work grocery stores at the following addresses:

08:01 The situation with water supply in Chernihiv as of 07.30. The city’s water supply is maintained, but the devices recorded significant water leaks from water pipes in the direction of Podusovka, Masana and the city center. It is reported by KP “Chernihivvodokanal”. There is a suspicion of serious damage to the water supply networks.

05:00 A photo of a house in Chernihiv that was fired upon by the Russian military is on the front page of the American edition of The New York Times: 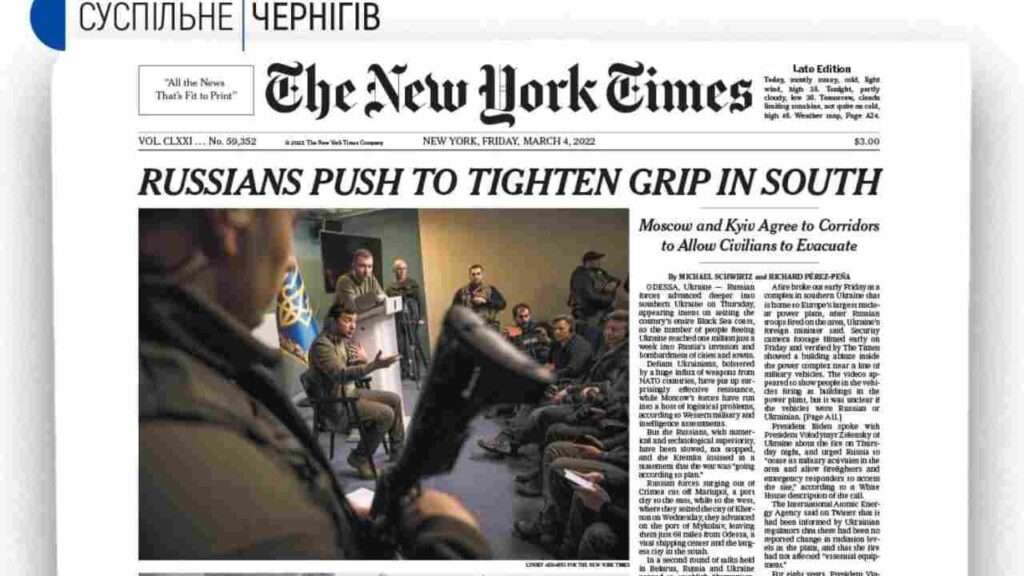 04:00 The Latvian city of Ogre, a partner of Chernihiv, broke off its partnership with two cities of Belarus in connection with the war in Ukraine.

02:10 Chernihiv Regional State Administration assured: all pensions have been accrued. Payments will be made through banks (charged to the card) and Ukrposhta (postmen work where it is more or less safe).

The situation in Chernihiv as of March 6

Over the past few days, Chernihiv has been subjected to heavy shelling by Russian warplanes, up to seventeen shillings per day.

Dozens of people died. Dozens of multi-story buildings were destroyed. Thousands of people have nowhere to live.

In Chernihiv and the region, a curfew is in effect from 18:00 to 06:00. At this time, it is forbidden to leave the shelter of your own home. At this time, the work of our military against the enemy’s DRG is intensifying. Do not create additional obstacles for yourself, and also do not put yourself in danger.

Addresses of stores that work

As of today, the following grocery stores operate in Chernihiv:

Opening hours will depend on the situation in the city.

It is impossible to leave Chernihiv right today. The city authorities are actively engaged in the issue of the “green corridor”, but now the city of Chernihiv is in the operational environment of the Russian occupier. And leaving in large groups, by buses, carries huge risks.

All operational and only verified news without Russian propaganda and fakes are in the Medico topics groups on Reddit.

Victory will be ours! Glory to Ukraine!

I hope, I gave what you what to know about The situation in the city on March 7.