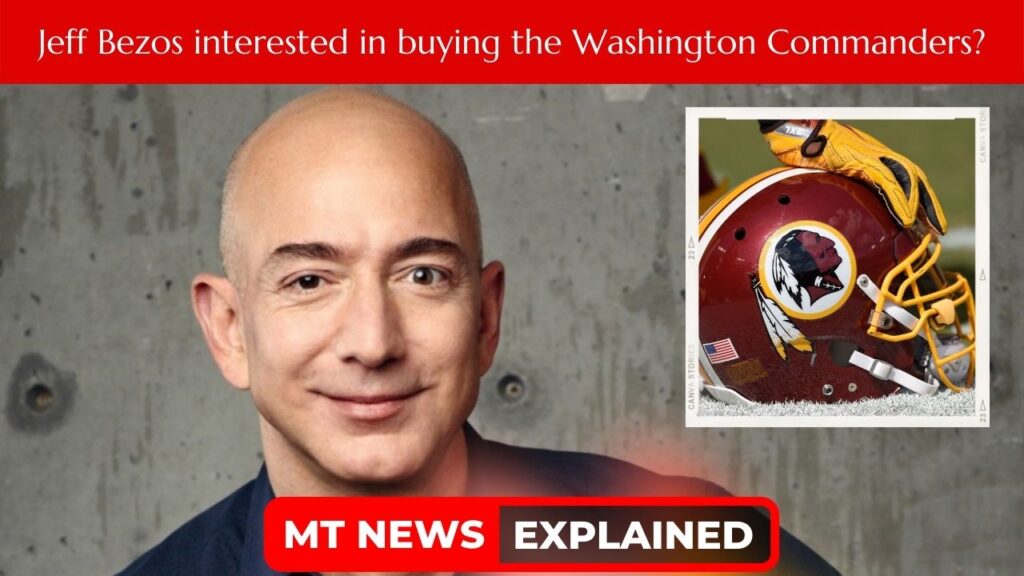 Jeff Bezos is interested in buying the NFL team

Jeff Bezos is “looking at buying the Washington Commanders,” according to the source, after current owners Dan and Tanya Snyder declared on Wednesday that they were thinking of selling the NFL franchise.

The insider claims that Bezos is thinking about making the purchase “perhaps in cooperation” with Jay-Z. The Brooklyn Nets once belonged to the rapper.

"hear me out… football in space." pic.twitter.com/lSj9hNWMbU

According to CBS Sports, The Amazon entrepreneur has indicated an interest in owning an NFL club since 2019, which first revealed his intentions. There were no clubs up for sale at the time, but sources told the magazine that Bezos “had strong support within the league to someday join their ranks.”

A person with knowledge of the subject told the Washington Post that Bezos is interested in making a bid for the team and that the effort might involve Jay-Z as an investor, adding that they are unsure “whether they will partner on it”, but both parties are “interested.”

Statement from the ⁦@Commanders⁩, confirming the Snyders have hired Bank of America to “consider potential transactions”. pic.twitter.com/LxNoM4EDCM

Forbes estimates Bezos’ net wealth to be $117.8 billion and the Commanders’ squad to be worth $5.6 billion. It goes without saying that before he concluded the drive to FedEx Field, Bezos could essentially Amazon Prime the team.

After 23 years of ownership, the Snyders appear to be considering selling the team or bringing in a minority investor, according to a statement provided to PEOPLE on Wednesday. One name, in particular, is getting traction: Jeff Bezos. Though many potential new owners are being suggested, some are more realistic than others. According to the Commanders, the Snyders “have retained BofA [Bank of America] Securities to consider prospective sales.”

The Wall Street Journal claimed that even though the statement did not expressly declare that the club will sell, employing a bank is a typical first step in the procedure.

A team representative responded, “We are examining all options,” when asked by PEOPLE what purchasing options the team was considering.

According to Forbes, Dan, 57, and Tanya, 60, have already made at least four phone calls to companies interested in buying the team.

Bezos or not, new ownership would prevent the potential “ousting” of the Snyders, who has faced criticism on numerous occasions for alleged workplace wrongdoing.

These allegations aren’t sitting well with the league; according to Sports Illustrated, there was talk of “ousting” the Snyders as the Commanders’ owners during a recent NFL owners meeting.

The Snyders asserted that they are still utterly preoccupied with the Commanders.

“The Snyders remain committed to the team, all of its employees, and its countless fans to putting the best product on the field and continuing the work to set the gold standard for workplaces in the NFL,” the statement concluded.

In need of a New Ownership

Dan Snyder’s time is running out towards the conclusion of the day. Jeff Bezos may be the ideal candidate to take over as owner of the Commanders, who are in desperate need of fresh leadership.

Why is Jay Barcelon? Husband Pleads Guilty in Fatal Stabbing of Rhona Fantone

Who is Chae An? Why did he tried to murder his wife Young An? All We Know So Far