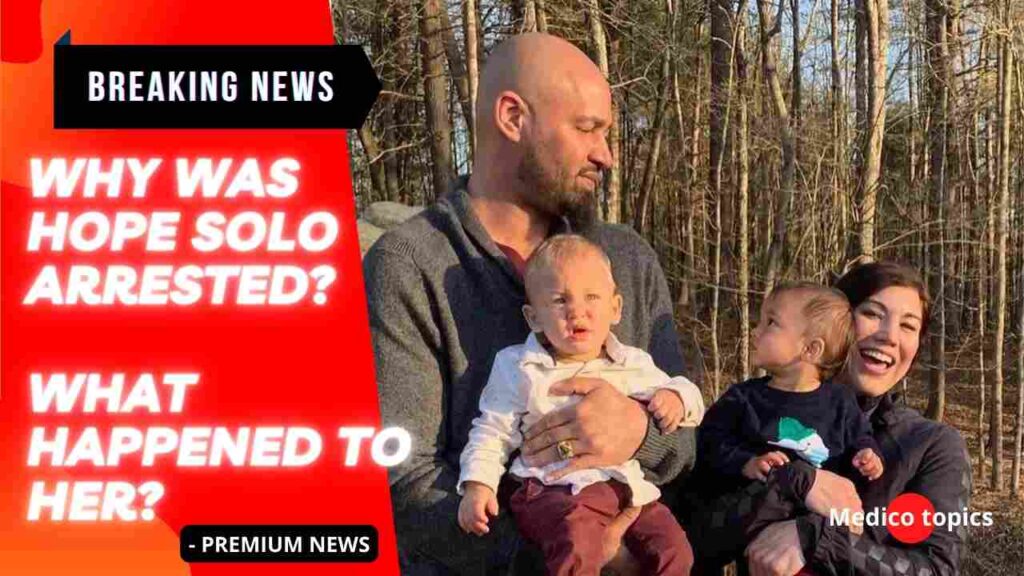 Why was Hope Solo arrested: WINSTON-SALEM, N.C. (WTVD) — Hope Solo, a former U.S. women’s national team goalkeeper, was arrested after being discovered passed out behind the wheel of a vehicle in North Carolina with her 2-year-old twins inside, according to police.

Why was Hope Solo arrested?

According to a police report, Solo was arrested on Thursday in a Winston-Salem shopping center parking lot and charged with driving while intoxicated, resisting a public officer, and misdemeanor child abuse. According to the report, she was released from jail and has a court date on June 28.

A passerby noticed Solo passed out behind the wheel for more than an hour with the vehicle’s engine running and the two children in the backseat, according to an arrest warrant.

A responding officer detected the odor of alcohol, and according to the warrant, Solo refused a field sobriety test, so her blood was drawn instead.

Rich Nichols, a Texas-based lawyer who represents Solo, issued a statement Friday but did not respond to specific questions about the charges and stated that his client would not respond as well.

“On counsel’s advice, Hope cannot speak about this situation, but she wants everyone to know that her children are her life, that she was immediately released and is now at home with her family, that the story is more sympathetic than the current charges suggest, and that she looks forward to her chance to defend these charges,” Nichols said.

Who is Hope Solo?

Solo, whose legal name is Hope Amelia Stevens. Hope Amelia Solo (born July 30, 1981) is a former soccer goalkeeper from the United States. She was a goalkeeper for the U.s women’s national soccer team from 2000 to 2016, and she is a World Cup and Olympic gold medalist. She played professionally for the Philadelphia Charge in the Women’s United Soccer Association after playing collegiately for the University of Washington (WUSA). When the WUSA folded after her first season, she went to Europe to play for top-tier leagues in Sweden and France. She played in the Women’s Professional Soccer (WPS) for Saint Louis Athletica, Atlanta Beat, and magicJack from 2009 to 2011. She played in the W-League for the Seattle Sounders after the WPS folded in early 2012.

Solo was fired from the national team after calling the Swedish team “cowards” for taking a defensive stance against the defending gold medalists during the 2016 Olympics in Brazil, bringing an end to a laudable playing career that was also marred by controversy.

In early 2015, she was suspended for 30 days after she and her husband Jerramy Stevens were pulled over in a US Soccer-owned van, and Stevens was charged with DUI. She was also benched after publicly criticizing coach Greg Ryan’s decision to start Briana Scurry against Brazil during the 2007 World Cup, which many interpreted as a slight against Scurry.

Solo was also involved in a fight with family members in 2014, which resulted in his arrest, though the charges were later dropped.

Solo made 202 appearances for the national team, winning 153 games and setting an international record with 102 shutouts. With the team, she won a World Cup title and two Olympic gold medals.

During her World Cup championship run in 2015, she allowed just 3 goals in seven games while recording five shutouts.

In January, she was inducted into the United States Soccer Hall of Fame. The ceremony is scheduled for May 21.