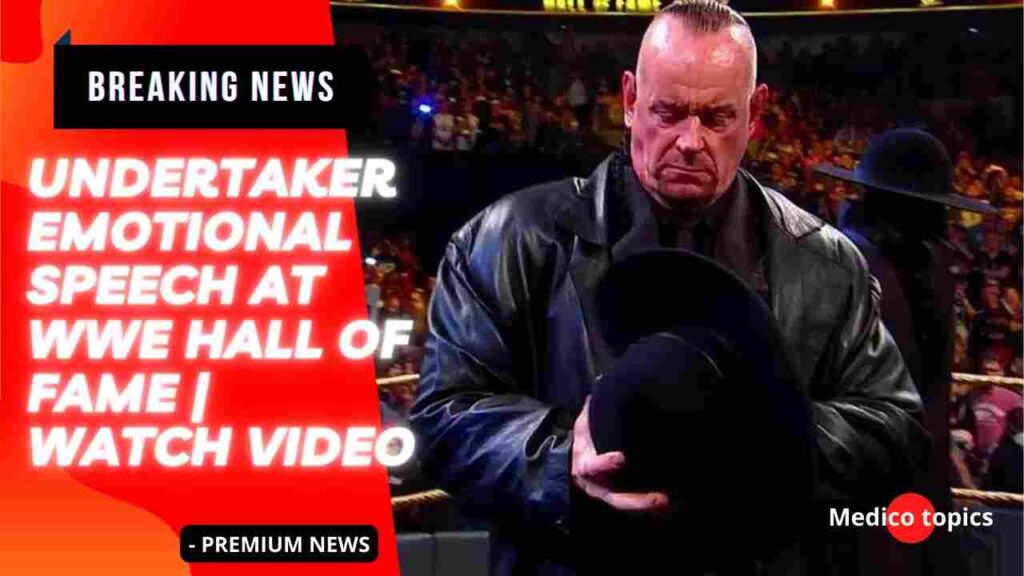 Undertaker emotional speech at WWE: Tonight, Vince McMahon inducted The Undertaker into the WWE Hall of Fame. This is unusual for Vince because he dislikes being mentioned at ceremonies, but he made an exception for Taker.

Here are some highlights from the induction:

Vince named a slew of people with whom Taker has collaborated over the years. Vince told a story about seeing The Undertaker and Triple H fighting on an elevator at Penn Station during a Shotgun Saturday Night taping. Vince stated that Taker did this despite his reluctance.

He also mentioned a time when Taker had to work in a graveyard in the rain, as well as another time when he had to stand for hours on a Thanksgiving Day float. Taker was praised by Vince as a leader and someone who commands respect for his toughness, discipline, and intelligence, among other qualities.

Taker received a standing ovation that lasted several minutes, possibly the longest ever at a Hall of Fame ceremony. Taker stated that he wanted to discuss Mark Callaway, the man in the black hat because he wanted to show the fans his appreciation for their support.

Taker thanked the fans for their support and for providing him with the motivation to push through all the pain and perform. Taker discussed entering the business after declining to pursue basketball, even though it was not what his parents desired.

Taker related a story about roughhousing a guy during a squash match and Vince saying to him that everyone in the arena and backstage thinks he’s an “assh*le.” Taker stated that he is not proud of his actions that night and that this was his first psychological move to constantly remind himself that his actions matter.

During his speech, he alluded to Shane and Stephanie McMahon as well as The Godfather. Shane was not shown on camera. He also mentioned the BSK (Rikishi appeared on camera) and the late Yokozuna, the BSK’s co-founder. Taker also discussed his “Crush” Bryan Adams and the last time he saw him. He also discussed Paul Bearer and the ribs he pulled. Taker also mentioned Kane, joking that he robbed all of his moves.

Taker also alluded to his father. Dusty Rhodes, Bruno Sammartino, Bret Hart, Ricky Steamboat, and Ric Flair were among those he thanked for paving the way for him.

Shawn Michaels, Triple H, Bruce Prichard, some behind-the-scenes personnel, his wife Michelle McCool, his parents, his children, and Vince McMahon. were also mentioned in his speech.

WWE official tweeted “The @undertaker  has faced them all in his unparalleled career”.

WWE official tweeted “What a moment! The WWE Universe showers the legendary @undertaker with praise as #ThePhenom takes his rightful place in the #WWEHOF”.