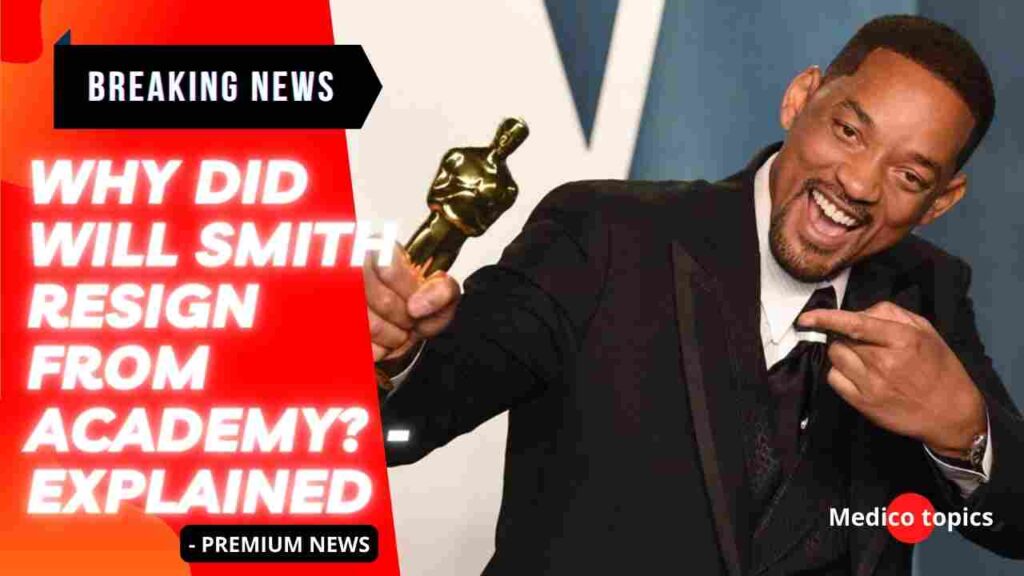 Why did Will Smith resign: Will Smith, a US actor, has resigned from the Academy of Motion Picture Arts and Sciences after slapping comedian Chris Rock on stage during the last Sunday’s ceremony.

What happened at the Oscar?

During the Oscars 2022 live ceremony, Chris Rock cracked a joke about Will Smith’s wife, Jada Pinkett Smith, and said he was looking forward to seeing G.I. Jane 2. The joke was directed at Jada Pinkett Smith’s shaved head.

“Chris Rock joked about Jada Pinkett-Smith being in ‘G.I. Jane’ due to her bald head.” She’s been candid about her hair loss. Chris Rock’s joke alluded to Jada’s skin condition, which is causing her to lose her hair. The viewers oohed and oohed as a result.

Will Smith stormed onto the stage shortly after the remark was made and emerged in the middle of Rock’s monologue to assault him.

Will Smith returned to his seat after the physical altercation with Rock, and the two exchanged words.

Smith was heard repeatedly saying, “keep my wife’s name out of your f***g mouth.”

Why did Will Smith resign: “My actions at the 94th Academy Awards ceremony were shocking, distressing, and inexcusable,” he said in a statement.

The Academy stated that it accepted the resignation and would “move forward” with disciplinary proceedings.

Smith slapped Rock for making a joke about his wife’s shaved head, which is caused by the hair-loss condition alopecia.

He won the best actor for his role in “King Richard,” in which he played the father of tennis stars Venus and Serena Williams, less than an hour later.

Why did Will Smith resign: “The list of those I’ve hurt is long, and it includes Chris, his family, many of my beloved friends and loved ones, everyone in attendance, and worldwide audiences at home,” Smith said on Friday.

“I betrayed the Academy’s trust. I denied other nominees and winners the opportunity to celebrate and be recognized for their outstanding work. I’m devastated.”

The actor stated that he wanted to “refocus attention on those who deserve it for their accomplishments.”

“Change takes time, and I am committed to doing the work to make sure that I never again permit violence to overtake reason,” he concluded.

The Academy’s president, David Rubin, stated that while the Academy accepted Smith’s resignation, the disciplinary proceedings would continue.

On Wednesday, Rock addressed the incident during a stand-up show in Boston, saying he was “still kind of processing what happened.”

Fans gave the comedian, 57, a standing ovation as he performed on his “Ego Death” tour in the United States.

According to reports, Rock had previously decided not to file criminal charges against Smith.

Smith’s wife, actress Jada Pinkett-Smith, broke her silence on Wednesday with a brief Instagram post, writing: “This is a season for healing, and I’m here for you.”

Watch Video: Chris Rock breaks down in tears at Boston First Show after the Oscar Slap

It’s a big deal to resign from the Academy. Membership in this illustrious, invitation-only organization is regarded as a mark of accomplishment in and of itself.

Only a few people have ever been expelled, including Harvey Weinstein, Bill Cosby, and Roman Polanski – though it was unclear whether Will Smith would face the same fate. He’d have found out in a matter of weeks.

But by quitting now, the actor sealed his own fate and forfeited his prestigious role as an Oscar voter. His apologies are strong, but they are not the end of the story.

The Academy has stated that its disciplinary proceedings will resume, which leaves open up the possibility that he will be stripped of the Oscar he won on Sunday – which seems unlikely – or that he will be barred from attending future Academy Awards ceremonies.

However, Hollywood is a forgiving place, and Smith is a well-liked character. To explain everything, perhaps his next leading role will be opposite Oprah Winfrey.

0 0 votes
Article Rating
Subscribe
2 Comments
Oldest
Newest Most Voted
Inline Feedbacks
View all comments
Why was Hope Solo arrested? What happened to her?