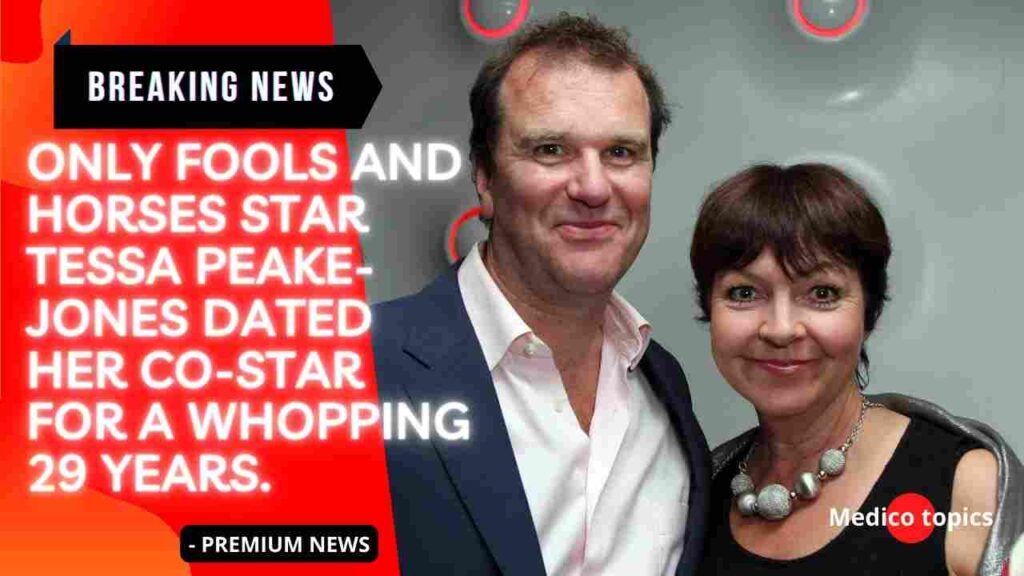 Only Fools and Horses star Tessa Peake-Jones date: There have been many stars who have dated their on-screen family members throughout the history of television and film – David Tennant married Georgia Moffett, who performed his daughter role on Doctor Who, Jennifer Carpenter, and Michael C Hall, who played brother and sister on Dexter, also married, though they divorced in 2010.

Tessa Peake-Jones and Douglas Hodge from Only Fools and Horses have a new on-screen mother-son relationship that has gotten a lot of attention.

Who is Tessa Peake-Jones?

Peake-Jones is an English actress best known for her role as Raquel in the BBC sitcom Only Fools and Horses, where she was Del Boy’s longtime partner, played by David Jason.

Peake-Jones was born on May 9, 1957, in Hammersmith, London, and in addition to her role in Only Fools and Horses, she also co-starred in the 1999 series Births, Marriages, and Deaths.

Her other television credits include Midsomer Murders, Casualty, Holby City, The Bill, Up the Garden Path, and So Haunt Me.

Peake-Jones played Sue Bond in the BBC soap Doctors in 2009 and 2011, and she appeared in the Doctor Who Christmas episode in 2013 alongside Matt Smith (The Crown, Last Night in Soho) and Jenna Coleman (Emmerdale, The Cry).

Peake-Jones has played Mrs. Slyvia Maguire in the ITV detective drama Grantchester, which is set in the 1950s, since 2019.

Who exactly is Douglas Hodge?

Hodge is an English actor, director, and musician best known for his theatrical work, despite having appeared in several TV shows.

Hodge, who was born in Plymouth on February 25, 1960, attended the Royal Academy of Dramatic Art (RADA).

In a Guardian interview, Hodge said of RADA, “I was led to believe everyone would be very bohemian and artistic, but there was no political knowledge of what was going on in the day – it was just training for a polite and humble entry into the [Royal Shakespeare Company].”

Hodge has appeared in several Harold Pinter plays, including No Man’s Land, Moonlight, Betrayal, and The Caretaker. Hodge was nominated for an Olivier Award for his performance as Aston in The Caretaker.

In 2004, he made his directorial debut at the Oxford Playhouse with a double bill of Pinter’s The Dumb Waiter and Other Pieces. Hodge made his Broadway debut as a director in 2015, directing Harold Pinter’s 1971 play Old Times.

To name a few of his other theatrical credits, he has appeared in Pericles, Blinded by the Sun, The Winter’s Tale, Three Sisters, Dumb Show, Guys and Dolls, A Matter of Life and Death, and Cyrano de Bergerac.

Only Fools and Horses, Spooks, Outnumbered, The Night Manager, Penny Dreadful, and Black Mirror are among Hodge’s television appearances.

On Only Fools and Horses, the character of Damien Trotter, the son of Del Boy and Raquel (played by Peake-Jones), was played by several actors, including Hodge in the 1996 episode Heroes and Villains.

Hodge also appeared in Joker, a film starring Joaquin Phoenix (Her, You Were Never Really Here) as Arthur Fleck.

Hodge described the film as “genius” in an interview with the Guardian.

“That shift in perspective is brilliant,” he said. If Batman could have the money to fund the Bat Cave and fight crime, he’d have to be a member of the 1%!

They couldn’t care less about the rest of us. I thought the film was fantastic, though Joaquin was probably a little too thin.”

How long were Tessa Peake-Jones and Douglas Hodge dated?

Only Fools and Horses star Tessa Peake-Jones date: Peake-Jones and Hodge had been married for 27 years and had two children together: Mollie, born in 1991, and Charlie, born in 2000.

In February 2013, they announced their breakup.

“I’m able to confirm that Tessa and Douglas separated in the autumn of [2012] by mutual and amicable agreement, and they will continue to raise their two children jointly,” a spokesperson for the couple said at the time.

[…] Only Fools and Horses star Tessa Peake-Jones dated her co-star for a whopping 29 years. […]