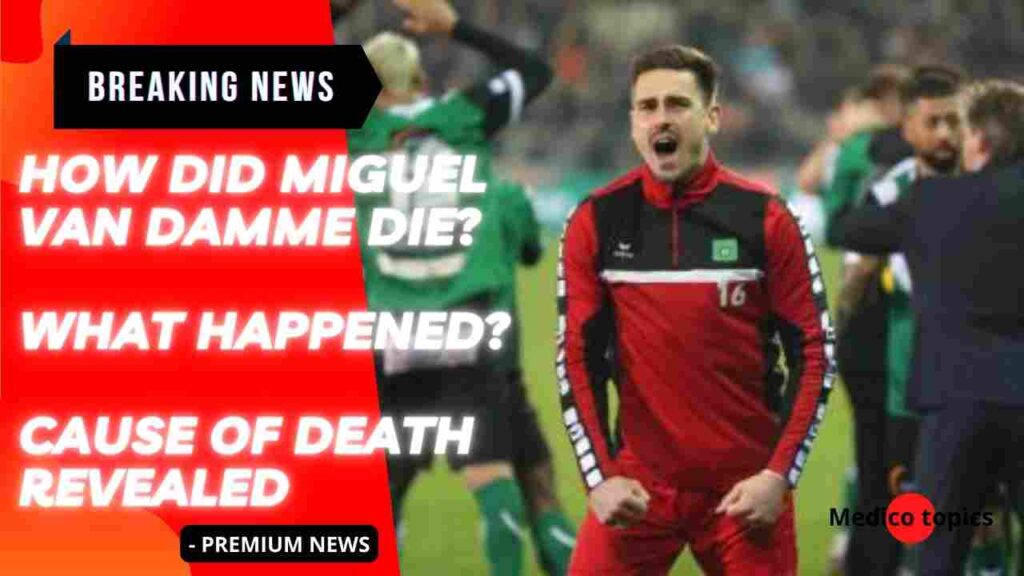 Who was Miguel Van Damme

Miguel Van Damme was a Belgian pro football goalkeeper who played for Cercle Brugge. He was a member of Cercle’s youth team.

Van Damme made his Jupiler Pro League debut on April 5, 2014. He played the entire game in a 1–0 home loss to K.V. Mechelen.
Van Damme was diagnosed with leukemia in June 2016, during a routine check-up before the 2016–17 season.

After a year, his cancer had gone into remission, and he renewed his contract with Cercle until June 2019.
He recovered and, even though he still required medication on a daily basis, he was able to play in the 2017–18 Belgian Cup against Genk on September 20, 2017.

Van Damme’s leukemia relapsed in January 2020, and he was told his chances of survival were slim.  Regardless, he received immunotherapy and signed a new one-year contract with Cercle on June 16, 2020.  He relapsed again on October 18, 2021, making him the fifth person in five years to battle leukemia.

Van Damme was married to Kyana Dobbelaere, with whom he had one child in 2021.

Van Damme, the goalkeeper for Cercle Brugge, debuted in the Belgian first division in 2014, but he only made 50 appearances due to the disease.

In 2016, he was diagnosed with leukemia. He recovered but relapsed, and in September 2020, he announced that his treatment was no longer effective.

“It is with great sadness that we report that our friend and teammate Van Damme has died after a long and uneven battle with leukemia,” the club said.

“Words cannot express how we feel, even though we were aware that things had not been going well for some time.

“Miguel, your persistence and strength in going for it [again] setback after setback was admirable.”

“You are a shining example of optimism, perseverance, and tenacity.” A source of inspiration for all fighters. #16 will live on in our green-black hearts forever.”

Van Damme is survived by his wife Kyana Dobbelaere and his daughter Camille. He was 28 years old.

“Our dearest darling, daddy left for his last match last night, a match that can no longer be won,” Dobbelaere wrote on Instagram. You left us slowly, but you did it again in your own unique way… very powerfully.

“You fought with the ferocity of a lion. We are eternally grateful for who you were. Many can learn from this example. You have taught me that there is no such thing as giving up; even if there was only a glimmer of success, you overcame it time and again.

“Rest now, darling; you have more than earned it; you are now pain-free.”

According to the Belgian Pro League: “We are thinking of his family, friends, and everyone at Cercle Brugge.

“Your tenacity has been inspiring. Rest in peace, my friend.”

0 0 votes
Article Rating
Subscribe
1 Comment
Oldest
Newest Most Voted
Inline Feedbacks
View all comments
Why did Max Mosley shoot himself? What kind of cancer he had?

[…] How did Miguel Van Damme die? Cause of death revealed […]