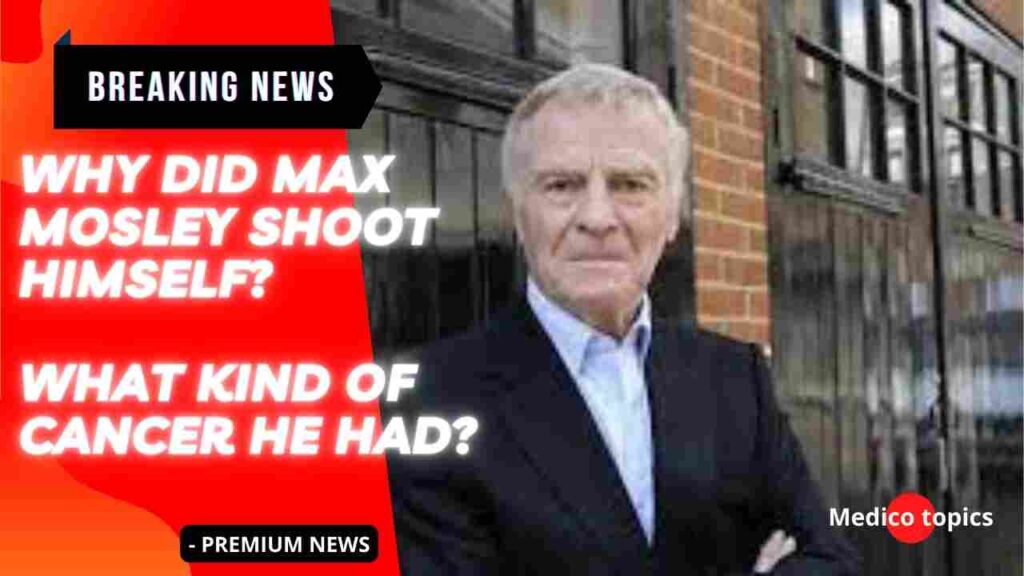 Why did Max Mosley shoot himself: A coroner has determined that former F1 boss Max Mosley committed suicide after learning that his cancer was terminal.

In May 2021, Mr. Mosley died in his London home. The 81-year-old had been suffering from excruciating pain.

Why did Max Mosley shoot himself: According to the evidence presented at Westminster Coroner’s Court, he discussed his plans with his wife, shared a final meal with her, and wrote a suicide note.

After exhausting all treatment options, doctors informed him that he had a “very limited life expectancy” and had transferred him to palliative care.

Mr. Mosley contacted his secretary the night before he was discovered dead to inform him of his intention to commit suicide.

He could not be persuaded and had formed a “settled intent,” according to the court, and a suicide note was discovered the next day.

Dr. Wilcox recorded a gunshot wound as the cause of death, adding that cancer was a factor in the death of “a remarkable man.”

“I am also entirely convinced Mr. Mosley would not have undertaken this action if it had not been for the distressing and debilitating terminal lymphoma,” she added.

According to Mr. Mosley’s relatives, his greatest achievement as president of the Federation Internationale de l’Automobile (FIA), the governing body for Formula One racing and a non-profit organization representing motoring interests worldwide, was “the promotion of road safety” and “green technology in F1.”

Max Mosley Cause of Death

The 81-year-old was thought to have died of Lymphoma cancer.

However, evidence of a gunshot wound was later discovered.

Cops said they tracked him down after discovering a note on his bedroom door that read, “Do not enter, call the police.”

He’d found out he’d only have a few weeks to live.

On March 29, 2022, Westminster Coroner’s Court heard that his inoperable B-cell lymphoma would cause him chronic bladder and bowel pain for the rest of his life.

Who was Max Mosley?

Mr. Mosley was president of motorsport’s governing body, the FIA, from 1993 to 2009. Following the death of Ayrton Senna in 1994, Mr. Mosley initiated widespread reforms of Formula 1 safety procedures.

When former Formula One boss Bernie Ecclestone learned of his death, he said it was “like losing a brother.”

Mr. Ecclestone stated at the time: “He did a lot of good not only for motorsport but also for the [car] industry. He was very good at ensuring that people built safe cars.”

Lymphoma is a type of cancer that begins in the immune system’s infection-fighting cells, known as lymphocytes. These cells can be found in the lymph nodes, thymus, spleen, bone marrow, and other organs. When you have lymphoma, your lymphocytes grow and change uncontrollably.

The main classification of Lymphoma

Different types of lymphocyte cells are involved in non-Hodgkin and Hodgkin lymphoma. Every type of lymphoma expands at a different rate and responds to treatment differently.

Lymphoma is caused by an unknown factor, according to doctors. However, it all starts with a genetic mutation in a disease-fighting white blood cell called a lymphocyte. The mutation instructs the cell to multiply rapidly, resulting in a large number of diseased lymphocytes that continue to multiply.

The mutation also allows the cells to survive when other normal cells would have died. This causes an overabundance of diseased and ineffective lymphocytes in your lymph nodes, causing swelling of the lymph nodes, spleen, and liver.

Lymphoma is highly treatable, and the prognosis varies according to the type of lymphoma and its stage. Your doctor can assist you in determining the best treatment for your illness’s type and stage.

Lymphoma is not the same as leukemia. Each of these cancers begins in a unique type of cell.

Lymphoma is also not the same as lymphedema, which is a gathering of fluid that forms in body cells when the lymph system is damaged or blocked.

In its early stages, lymphoma may not always cause symptoms. Rather, enlarged lymph nodes may be discovered during a physical examination by a doctor. Under the skin, these could feel like small, soft nodules. A person may feel lymph nodes in the following areas:

Similarly, many early lymphoma symptoms are nonspecific. As a result, they are easy to overlook. These are some of the most common early symptoms of lymphoma: