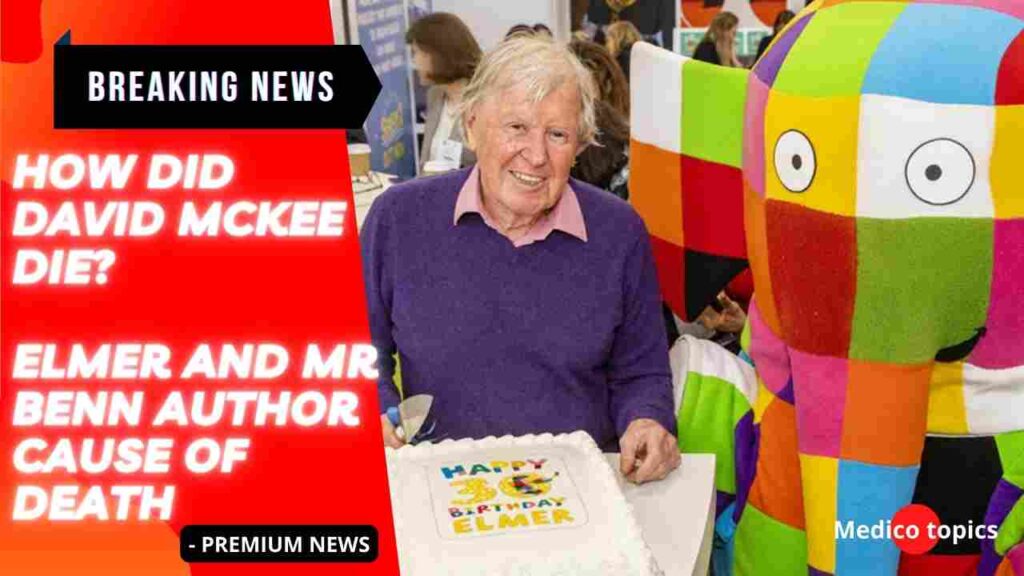 How did David McKee Die: David McKee, the author, and illustrator of the classic children’s books Elmer, Not Now, Bernard, and Mr Benn, has died at the age of 87, according to his publisher.

Who was David McKee?

McKee grew up in Tavistock, Devon, and attended Plymouth Art College. When he was working at Abelard-Schuman, Flugge published his first book, Two Can Toucan, in 1964. When Flugge established Andersen Press in 1976, McKee joined him and went on to write over 50 books for the publisher.

McKee wrote and illustrated 29 original stories about Elmer, the beloved patchwork elephant, the first of which was published in 1968. The books are still one of the most widely read children’s book series of all time, with over 10 million copies sold and translations into more than 60 languages.

In 2014, the Guardian hailed Elmer as an LGBT hero due to the themes of inclusivity, celebration, and friendship that run throughout the Elmer stories. “I never intended to do that,” McKee said at the time, “but I suspect there are subconscious processes at work that I only discovered later.”

In addition to writing and illustrating children’s books, McKee was a successful fine artist and co-creator of animated TV shows such as Mr Benn, which was based on his series of books about an explorer’s magical adventures. Last year marked the series’ 50th anniversary.

McKee was honored with the BookTrust Lifetime Achievement Award in 2020. “David McKee knows the significance of always paying attention to children, and what he gives them is first-rate,” chair of judges Nicolette Jones said when announcing his victory.

How did David McKee Die: His publisher, Andersen Press, confirmed the news, stating that he died at his home in the south of France after a brief illness.

David McKee is surrounded by family in the south of France. After a lifetime of travel, he and his companion Bakhta, a French-Algerian art dealer, had been separating their time in recent years between London and Provence.

“He was a singular voice and a shining light in children’s books, emphasizing inclusivity, diversity, and aspects of our world that are not always present in children’s publishing.”

“Not only was I fortunate to be his publisher, but he was also a great friend, and he will be missed by many more people than he could ever imagine,”.

Farewell to David McKee, creator of Mr Benn, gone at 87. As a kid and a want to be story-teller, Mr Benn was such an inspirational TV show. #RIP #RIPDavidMcKee #MrBenn

Sad to hear of the passing of David McKee. A legend of books and TV for children. A great author and brilliant illustrator. Always wanted to write a Mr Benn movie. Cheers to you! #DavidMcKee
@therealmrbenn

Oh goodness. Illustrations that surrounded us and shaped us. Mr Benn was my favourite – we all wanted to go through that magical door and become someone else. Thanks for those wonderful faces and drawings, David McKee.