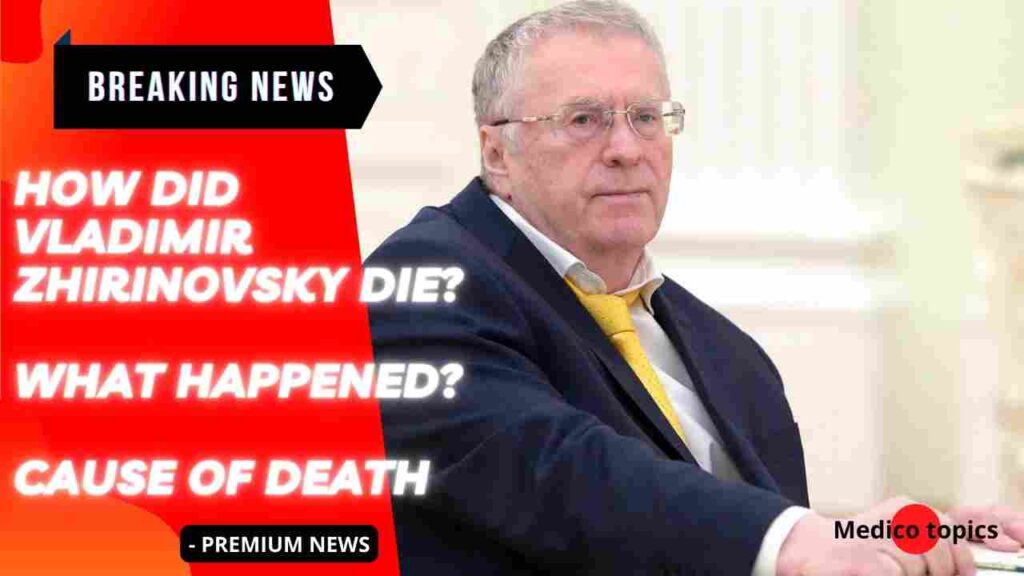 How did Vladimir Zhirinovsky die: Russian nationalist leader Vladimir Zhirinovsky, a senior lawmaker whose sulfurous rhetoric and antics alarmed the West but appealed to Russians’ resentment and wounded pride, has died at the age of 75, according to the speaker of Russia’s lower house of parliament.

Who was Vladimir Zhirinovsky?

Zhirinovsky was born Vladimir Volfovich Eidelstein in Almaty, the capital of then-Soviet Kazakhstan, and moved to Moscow at the age of 18 to study Turkish at Moscow State University.

Following his military service, he held a number of positions in state committees and unions. His political activities went unnoticed until the formation of the Liberal Democratic Party eight months before the Soviet Union’s demise.

For three decades as the leader of the Liberal Democratic Party, Zhirinovsky was infamous for making vehement statements that were neither liberal nor democratic and were usually delivered with a ferocious glare.

He advocated for Russia to retake control of Alaska from the United States, suggested that Russia use a nuclear weapon to attack former Ukrainian President Petro Poroshenko’s residence, and said he wanted a DNA test to see if he was related to Donald Trump.

While Zhirinovsky played a wild man, many saw him as a tame creature who was subservient to the Kremlin. In parliament, his party routinely voted to support measures proposed by President Vladimir Putin’s power base, the more stalwart United Russia party.

As the Soviet Union began to disintegrate, Zhirinovsky founded the Liberal Democrats, which became the country’s first officially recognised opposition party. According to later accounts, its formation was a KGB project aimed at diverting legitimate opposition sentiment into ineffective channels.

The party had a significant presence in parliament in its early years. In the 1993 parliamentary election, it received the single largest share of votes and was elected to 64 seats in the 450-member Duma.

Its prominence gradually dwindled, and by the 2021 election, the party had been reduced to 21 seats.

Though the party’s influence waned, Zhirinovsky remained a vibrant figure whose remarks were met with enthusiasm or revulsion, but rarely indifference.

Vladimir Zhirinovsky, a Russian far-right politician known for provocative stunts and anti-Western tirades that maintained him in the public eye for more than three decades, died on Wednesday after a long illness.

How did Vladimir Zhirinovsky die: According to Russian media, Zhirinovsky, 75, was admitted to hospital earlier this year after contracting COVID-19 and was too ill to speak out publicly about the war in Ukraine.

Zhirinovsky died after “a serious and prolonged illness,” according to State Duma Speaker Vyacheslav Volodin. On Feb. 2, the lawmaker was admitted to the hospital with COVID-19; in late March, Kremlin spokesman Dmitry Peskov said Zhirinovsky was “in serious condition.”

Putin expressed his condolences to Zhirinovsky’s family on Wednesday, describing the lawmaker as “an experienced politician, an energetic person open to communication, a bright speaker and polemist.”

“As the founder and longtime leader of one of the country’s oldest political parties, he contributed significantly to the establishment and development of Russian parliamentarism and domestic legislation, and sincerely strove to contribute to the resolution of the most pressing national problems,” Putin said in a message released by the Kremlin. “And he always defended the patriotic position, the interests of Russia, in front of any audience, in the most heated debates.”