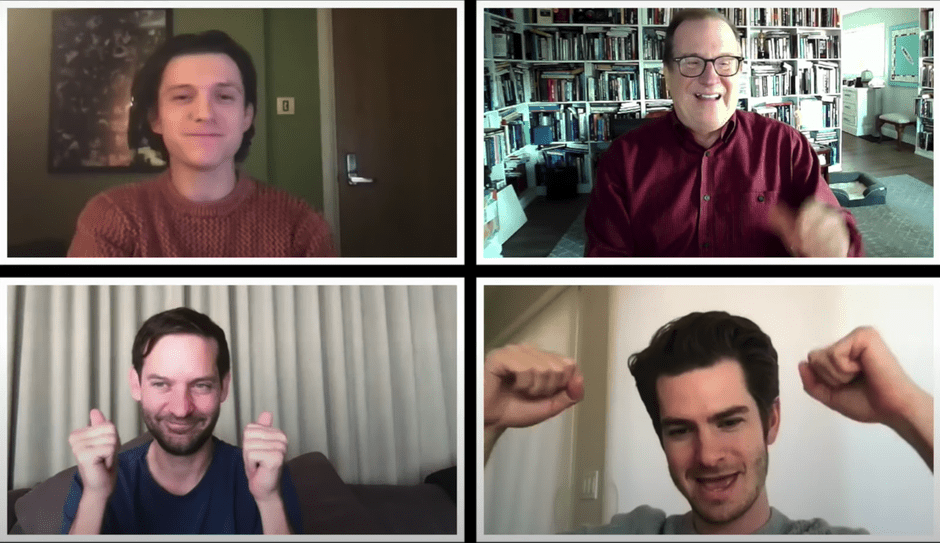 All 3 spider man in one interview: One month and eleven days have passed. Many people have been waiting for the ultimate Spider-Man: No Way Home interview for a long time.

Since the Marvel/Sony movie came over Christmas, Tom Holland, Tobey Maguire, and Andrew Garfield have finally convened online to discuss it. The latter two actors, who previously played distinct incarnations of Spider-Man in other films, reprised their roles in the newest adventure of the web-slinger

Given the secrecy surrounding the participation of all three Spider-Men in No Way Home, the wait for this interview is justified. The cat is out of the bag now. Below, Holland, Maguire, and Garfield discuss their experiences with the part.

When asked how he was approached to feature in the film, Maguire replied, “Amy [Pascal] was like, ‘We’d love to talk to you and you know what this is about.'” He spoke with Marvel Studios President Kevin Feige and Amy Pascal, the film’s producer.

“It was fascinating, but I was also thinking to myself, ‘Well, what are we going to do?’ And that was a little perplexing.”

When Maguire agreed to be in the film, Garfield consented as well.

When asked the same question, Garfield said, “Well, I was just waiting to see whether Tobey was going to do it.” “I was thinking, ‘Well, I guess I don’t have a choice.'”

Holland also said that some of the film’s funniest sequences were made up on the spot.

Holland remarked, “It was extremely collaborative.” “It was all things we came up with on the day, from [Garfield] breaking Tobey’s back to [Garfield] coming up with the concept of pointing at us.”

Despite the epidemic, Spider-Man: No Way Home became the most successful film of 2021, grossing over a billion dollars at the box office. It took only 12 days to surpass the billion-dollar mark, making it the first film to accomplish so since Star Wars: The Rise of Skywalker in December of 2019.

Will be posting a new blog about All 3 spider man in one interview, Stay tuned.