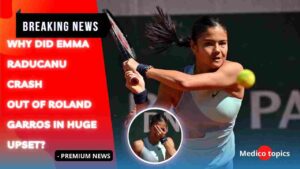 Emma Raducanu crash out of Roland Garros in a huge upset

Emma Raducanu, the reigning US Open champion, was eliminated from the French Open on Wednesday after losing 3-6, 6-1, 6-1 to Aliaksandra Sasnovich of Belarus in the second round.

Raducanu has now lost to Sasnovich twice in the last eight months — the British No. 12 seed was defeated by the world No. 47 in Indian Wells last year.

Aliaksandra Sasnovich comes back from a set down to defeat US Open champion Emma Raducanu 3-6, 6-1, 6-1. Into #RolandGarros R3.

Raducanu’s 6th loss of the season in decisive sets. First set was flawless, then she completely lost power in her forehand. From weapon to weak shot. pic.twitter.com/VDc1EoYLsS

Raducanu, who was making her professional debut at Roland Garros this year, made 33 unforced errors and paid the price for failing to convert five break points in the decisive set’s third game.

Following an 11 a.m. start in the French city, the 19-year-old took the first set 6-3 and appeared to be coping with the windy circumstances, but Sasnovich stamped her force and authority on the match with a spectacular display of shotmaking.

Throughout the three sets, the Belarus star hit 45 winners, breaking Raducanu’s serve five times. “I thought I couldn’t win after the first set, so I just played point by point,” Sasnovich, 28, explained.

What happened to Emma Raducanu

Raducanu, who had a back ailment prior to Roland Garros, has only two top 50 victories this year, indicating that higher-ranked players are beginning to exploit her flaws.

The US Open champions wins just two of the last 14 games to crash out in disappointing fashion.

Regardless, the adolescent made it to the second round of each of the four majors on her first try. She’ll visit her parents in Kent before beginning the preparations for the grass-court season.

“It’ll be good to be home and play on grass again,” Raducanu added. “I’m excited to compete in front of my home crowd.” I’m not sure what to expect in terms of atmosphere.”

Fan’s Reactions to Raducanu Crash out

Almost a Catch-22 situation with Emma Raducanu right now. Needs a solid run in a tournament to build fitness and physical resilience, but doesn’t yet have that to get past the opening rounds #RolandGarros

Disappointing end to what has been a perfectly respectable first clay-court campaign for Emma Raducanu. A 6-5 record on the brown dirt having barely played on it previously, and now on to more helpful grass.

Aliaksandra Sasnovich comes back from a set down to defeat US Open champion Emma Raducanu 3-6, 6-1, 6-1. Into #RolandGarros R3. Raducanu’s 6th loss of the season in decisive sets. The first set was flawless, then she completely lost power in her forehand. From weapon to weak shot.

Note to Trending. Emma Raducanu didn’t ‘crash out’ of the Australian Open. She lost in 3 closely fought sets with blisters on her hands and she beat a previous grand slam winner in the first round.
KEEP READING,
How did Gennaro Cannavacciuolo die? Cause of Death Explained
How did Stephen Clinch die? What happened? Cause of Death Explained
Follow us on Twitter to get instant notifications and news.
kavi

[…] Why did Emma Raducanu crash out of Roland Garros in huge upset? […]