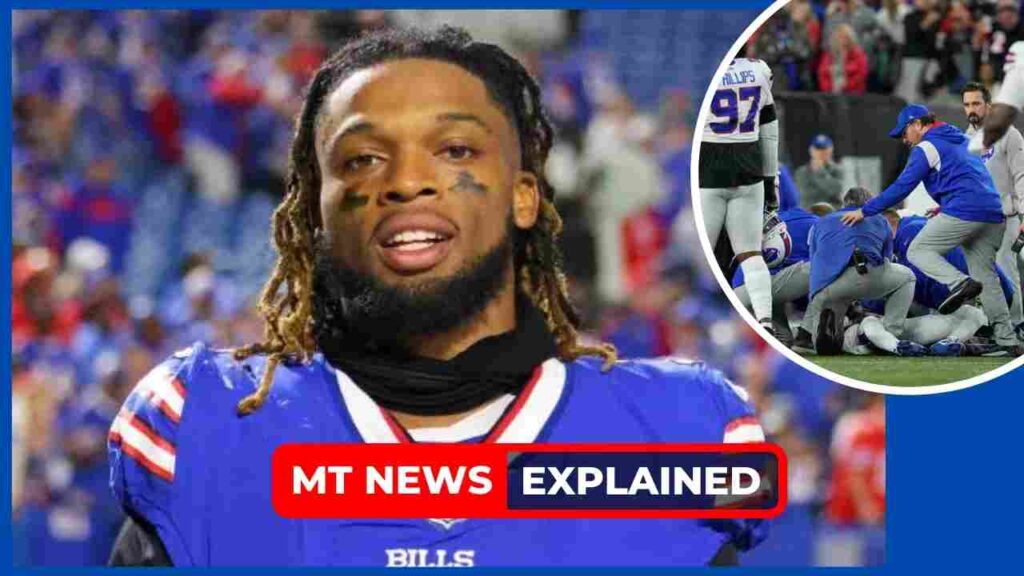 The NFL reported that Buffalo Bills safety Damar Hamlin was in critical condition after collapsing on the field Monday night. As a result, the game between Buffalo and the Cincinnati Bengals was called off.

After being hurt while tackling Bengals receiver Tee Higgins, Hamlin received CPR on the field and was mobbed by teammates, some of whom were in tears, according to ESPN.

What happened in the field?

Hamlin was struck in the chest by Higgins’ leading right shoulder. Then, to drag Higgins down, Hamlin encircled his arms over his shoulders and helmet.

After standing up and appearing to adjust his face mask with his right hand for about three seconds, Hamlin slumped backward and remained immobile.

According to the NFL, Hamlin received treatment on the field from the team and outside medical staff as well as local paramedics before being transported by ambulance to the University of Cincinnati Medical Center. Stefon Diggs, a teammate, later joined Hamlin in the hospital, according to ESPN.

More than an hour after the injury, the NFL decided to end the game. It was not immediately clear whether or when the teams would return to the field.

We are thinking of Damar and the Buffalo Bills. As further information becomes available, we will update this post, the league said in a statement. The NFL Players Association, which supports postponing the game, has frequently contacted the NFL. 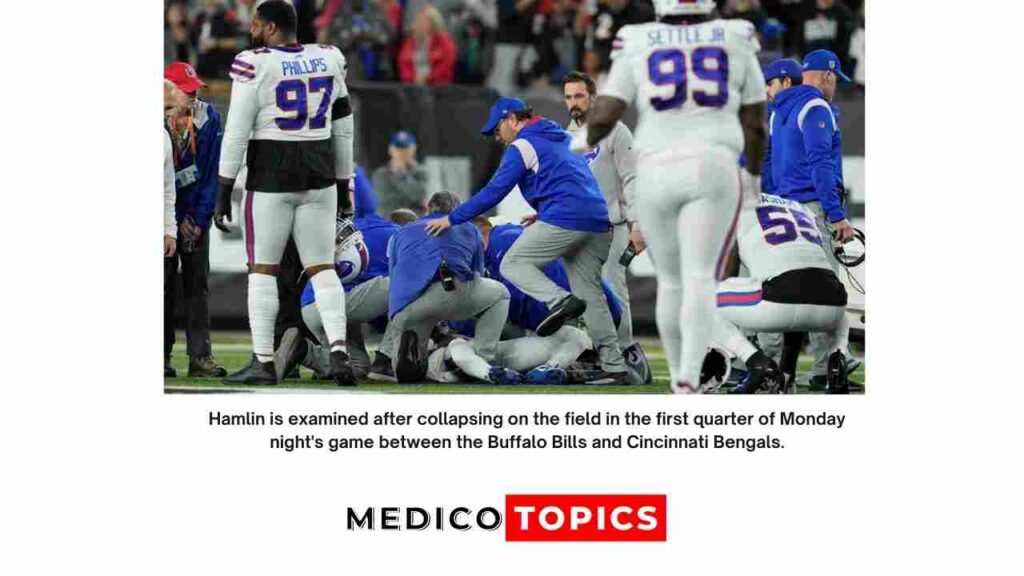 How is his health condition now?

Ian Rapoport received a statement from Damar Hamlin’s agent who said there is no update on his condition. The UC Medical team also told reporters outside the hospital that no update will be given this evening. He remains in critical condition. The other gentleman that posted an update on Twitter is Damar’s marketing rep but not his agent.

Bills had gathered for prayer

Four minutes after Hamlin collapsed, an ambulance arrived on the scene with other players crying, including cornerback Tre’Davious White. Josh Allen of Buffalo and Joe Burrow of Cincinnati, both quarterbacks, hugged.

When Hamlin was brought off the field approximately 19 minutes after collapsing at 8:55 p.m., the Bills had gathered for prayer. The game was called off a short while after the ambulance left the field, and the players slowly filed off the field and into their locker rooms.

Hamlin looked to be receiving CPR from medical professionals, and his uniform was torn. On its broadcast, ESPN stated that Hamlin received oxygen as well.

The thoughts and prayers of all of Bills Mafia are supporting you, Damar. 🙏 pic.twitter.com/lDWNAOEPX4

Veteran NFL quarterback Troy Aikman said on the ESPN broadcast, “No one’s been through this. “I haven’t seen anything like it either,” she added.

In the opening frame of a contest between teams aiming for the top AFC playoff seed, the Bengals had a 7-3 lead. AFC East champion Buffalo entered at 12-3, while Cincinnati entered at 11-4 and led the AFC North by one win over Baltimore.

The NFLPA released a statement saying, “The NFLPA and everyone in our community are praying for Damar Hamlin.” “We have communicated with players for the Bengals and Bills as well as the NFL. The well-being of Damar is the only thing that matters right now.

In Buffalo’s 2007 season opener against the Denver Broncos, tight end Kevin Everett of the Bills lay motionless on the ground after making a tackle on the opening kickoff of the second half. After suffering a spinal cord injury, Everett was first only partially disabled.

The 24-year-old Hamlin attended Pittsburgh, his birthplace, for five years of college. During that time, he played in 48 games for the Panthers. As a senior, he was selected to participate in the Senior Bowl, earned a spot on the second-team All-ACC, and was elected team captain.

He was selected by the Bills in the sixth round of the 2021 NFL Draft, appeared in 14 games as a rookie, and then started this season after Micah Hyde went down with an injury.

Hamlin organized a community toy drive, and by late Monday night, donations had risen to more than $900,000. He said he wanted to make $2,500.

The 6-foot, 200-pound Hamlin had 91 tackles going into the game, including 63 solo stops, and 1 1/2 sacks. A straightforward tweet came from the Pitt football account: “Of us, Damar Hamlin is the best,” The tweet addressed Hamlin by his college jersey number, “3, and declared its admiration for him. “I’m wishing for you.”

Within an hour of Hamlin’s passing, contributions to the 2020 GoFundMe page for his nonprofit organization, The Chasing M’s Foundation, began to flood in. According to the page’s description, Hamlin was collecting money to buy presents for less fortunate children.

The largest contributions came from a “Fan Of Damar” who gave $5,000 in addition to the $1,000 apiece from 14 anonymous donors. Other folks wrote encouraging messages and prayed for Hamlin’s safety on his notes.

“Gratitude for Damar Hamlin. I’m hoping for the best and, if at all possible, for this young man to go back to normal “read a letter from Brian Berry, a Monday donation of $50 to the cause.

Hamlin stated on the GoFundMe page that he is dedicated to utilizing his position to have a positive impact on the neighborhood where he was raised on December 14, 2020.

“You can still support this effort even if you are unable to financially do so. Toy donations are welcome at the daycare facility, or you can simply spread the word by sharing this fundraiser on your social media accounts “Hamlin penned.

“I appreciate all of your help, both on and off the field. I’m grateful for the chance to collaborate with you to make the holiday season a little more cheerful for the children in our neighborhood “Added he. Insider’s request for comment from The Chasing M’s Foundation representatives was not promptly fulfilled.

Who is Damar Romeyelle Hamlin?

Damar Romeyelle Hamlin, a safety with the National Football League’s Buffalo Bills, was born on March 24, 1998. (NFL). At Pittsburgh, he played collegiate football.

Hamlin was raised in McKees Rocks, Pennsylvania, and went to Pittsburgh’s Central Catholic High School. First-team All-State honors and Class AAAA Defensive Player of the Year were given to him.

Coming out of Central Catholic, Hamlin was regarded as a top cornerback and was pursued by numerous prestigious college football programs. To play collegiate football for the Pittsburgh Panthers, he enrolled at the University of Pittsburgh.

As a redshirt sophomore, Hamlin led the Panthers in tackles with 76 and had two interceptions. He was also selected for an honorable mention All-Atlantic Coast Conference (ACC).

The crowd for Damar Hamlin is growing outside Cincinnati’s main hospital. Bills and Bengals fans stand shoulder to shoulder hoping for his recovery. @Enquirer pic.twitter.com/mSXFo82och

this broke me. i’m not a praying person, but I will be sending healing thoughts for Damar Hamlin & his teammates tonight pic.twitter.com/MVMyGOB4pQ

Damar Hamlin’s charity has now reached over $1.5 million in donations and over 61,000 donors tonight.

What a COMMUNITY ❤️ pic.twitter.com/ZSsaMJ1mX5

Please join me in praying for this 24-year-old living out his dream of playing football that turned into a nightmare for him and his family tonight. Damar Hamlin is officially listed in critical condition. His mother rode in the ambulance to the hospital with him after he collapsed on the field. There is no doubt that this family and this man need to be covered in prayer tonight. Please join me in asking for complete healing.

PRAYERS FOR DAMAR: Buffalo Bills safety Damar Hamlin was transported to a hospital after collapsing on the field during Monday night’s game against the Cincinnati Bengals.

In 2020, Damar Hamlin started a GoFundMe to purchase toys for children in his community. The initial goal was $2,500.

Tonight, it has garnered more than a million dollars in donations ❤️ pic.twitter.com/1pAnvUETyP

How did Mike Ruben die? Director of the Ripley Convention cause of death explained