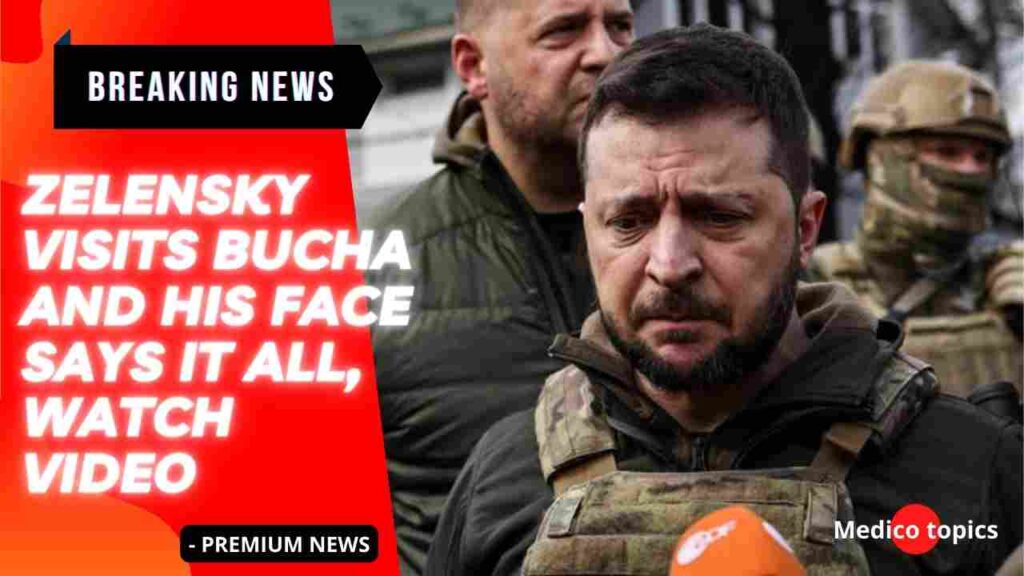 Zelensky visits Bucha: On Monday, a tearful Volodymyr Zelensky paid a visit to Bucha, where Vladimir Putin’s troops killed civilians in what has been broadly condemned as war crimes.

The Ukrainian president was surrounded by security as he visited the scene of the heinous atrocities.

Evil to our land would be accountable

Mr. Zelensky spoke with local residents about the atrocities perpetrated by Mr. Putin’s forces on their community.

Previously, he vowed that Putin and his troops, who brought such “evil to our land,” would be held accountable for war crimes that have shocked the world.

As more harrowing footage of civilians being murdered in Bucha, near Kyiv, emerged, Britain condemned the Russian president’s “whole new world of horror” and vowed to lead the global response to force him to end his barbaric invasion.

Cabinet ministers advocated for tougher sanctions against Putin’s regime, as well as increased military, economic, and diplomatic support for Ukraine. Its prosecuting attorney, Iryna Venediktova, said 410 civilians’ bodies had been discovered in towns near the capital that had recently been retaken from Russian troops.

Zelensky visits Bucha: Tetyana Volodymyrivna, a Bucha resident, described the horror of discovering her murdered husband. “I recognized him because of his sneakers and his pants.” “He appeared to be mutilated, and his body was cold,” she said. Mr. Zelensky said in a late-night message to the Ukrainian people, “concentrated evil has come to our land.”

He emphasized that “every crime committed by occupiers on our state’s territory” would be investigated. He vowed to bring war criminals to justice, saying, “Everyone guilty of such offenses will be entered in a special Book of Executioners… will be found and punished.” In an interview with CBS News, he called the killings “genocide” and said the Russian invasion involved “the torture of the entire nation.”

“There have been many war crimes committed around the world.” The time has come to make Russian troops’ war crimes the last of their kind on the planet.”

However, it remained unclear how Mr. Putin and his military commanders would be held accountable for the atrocities committed in Ukraine.

In London, Cabinet Minister Simon Hart said the West needed to make a “common effort” to put pressure on the Kremlin to stop the military offensive, on which Russian defense chiefs are now focusing attention on the Donbas region of eastern Ukraine, and to expand military, economic, and diplomatic support for Ukraine.

“Clearly, in any circumstance like this, a negotiated settlement is where everyone attempts to aim,” he said on Talk Radio. “But we are in a whole new world of horror now, so we have to provide all of the support and help that we can, in the numerous ways that we can, and continue to lead and inspire the international response.”

Zelensky visits Bucha: Mr. Zelensky has already praised Boris Johnson for attempting to galvanize an international response to Mr. Putin’s invasion, which has resulted in the deaths of thousands, if not tens of thousands, of civilians, including in the besieged city of Mariupol.

Mr. Hart, the Welsh Secretary, said on Sky News, “This is not just the UK.” This is about taking the lead in a global response. If the response is to be effective, the West and many, many nations must join forces in that common effort.”

He went on to say that Britain was prepared to do everything possible to provide multiple weapons to Ukraine as its demands changed, or the funds to acquire them from another source.

In terms of tightening sanctions against Mr. Putin’s regime, he added, “Now is not the time to sit back and say we’ve done enough.” In France, President Emmanuel Macron stated that a new round of sanctions against Russia was required and that there were clear indications that Russian forces were responsible for civilian deaths in Bucha.

What happened in Bucha?

“What happened in Bucha necessitates a new round of sanctions and very clear measures,” Mr. Macron said on France Inter radio. These new sanctions should target coal and oil, according to Mr. Macron, who is running for re-election this month.

The Kremlin, which previously denied planning an invasion of Ukraine, has now also denied that its forces were responsible for the killing of civilians in Bucha, claiming that Ukraine staged a show for Western media.

However, the assertion contradicted the shocking footage, pictures, and reports of civilians, some with their hands cuffed behind their backs, signs of torture, and having been shot in the head, as well as mass graves, discovered. Several women’s bodies were also discovered dumped by the side of the road.

Poland’s Prime Minister Mateusz Morawiecki accused Germany, which relies heavily on Russian gas, of being the main impediment to tougher sanctions against Russia.

[…] Zelensky visits Bucha and his face says it all, Watch Video […]

[…] Zelensky visits Bucha and his face says it all, Watch Video […]