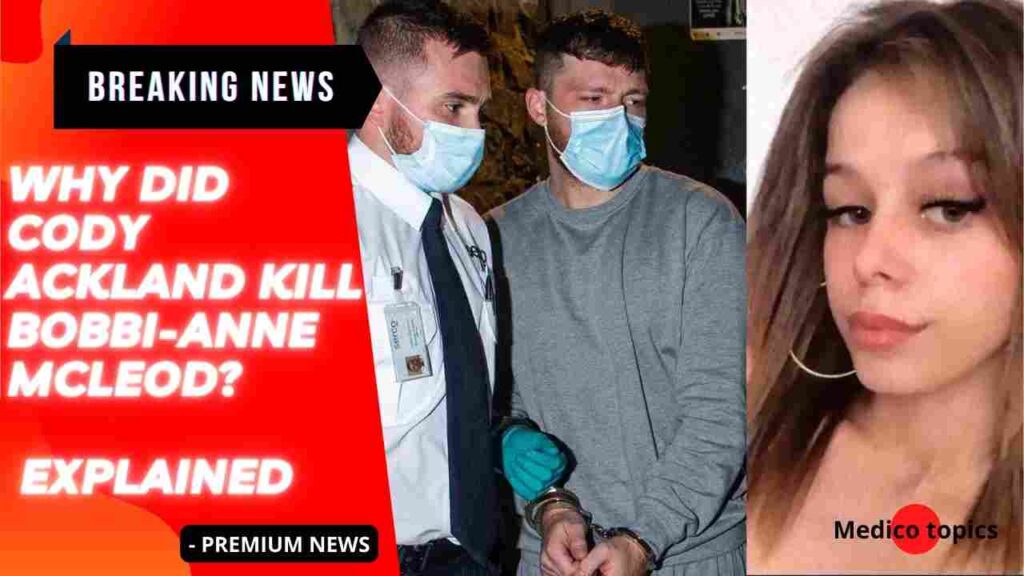 Why did Ackland kill Bobbi-Anne: A 24-year-old rock musician has confessed to the murder of 18-year-old Bobbi-Anne McLeod, who went missing from a bus stop in Devon in November of last year.

How did Cody Ackland kill Bobbi-Anne?

Cody Ackland grabbed McLeod, who was less than 5ft tall and appeared younger than her age, off the street near her Plymouth home, drove her away, and attacked her with a blunt instrument before hiding her body in the woods on a lane down to a beach.

After McLeod did not show up to meet her boyfriend, a massive search was launched. Three days after the attack, Ackland walked into a police station and told officers where to find the young woman’s body and what he had done.

Why did Ackland kill Bobbi-Anne?

Ackland lived with his mother in the city’s Southway neighborhood, about two and a half miles from McLeod’s house. He was the lead guitarist and songwriter for Rakuda, a Plymouth-based indie rock band.

The pair did not know each other, and the motive for the attack is unknown. But it is believed Ackland used violence to force her into his vehicle before repeatedly beating her.

McLeod’s family sat in the back of the court, including her mother Donna and older brother Lee. Donna sobbed, and both were consoled by onlookers.

Before Ackland was brought into court, the judge, Robert Linford, requested that those in the public gallery exercise restraint. “These are trying and tense hearings.” “I expect the case to proceed in silence,” he said, requesting that anyone who felt unable to comply leave.

Ackland only spoke to confirm his identity, and date of birth, and to plead guilty to murder between November 19 and November 23. He stood on the dock, as far away from the public gallery as possible, wearing a grey sweatshirt and blue jeans and surrounded by four security guards. Two police officers were stationed in the courtroom.

The prosecutor, Richard Posner, stated that given the murder plea, a charge of kidnapping would not be pursued. He also stated that the prosecution was awaiting a neuropathologist’s report. In court, no details about what happened were given. Defending attorney Ray Tully QC stated that the defense would provide the court with a psychiatric report on Ackland.

Ackland remained emotionless as he learned he would be sentenced on May 19. Linford told him he’d be imprisoned for life, with the only question being how long he’d have to serve before being eligible for parole. He remanded Ackland in jail and ordered him to return to the cells. The public gallery was thanked by the judge for its restraint.

“I can’t even begin to imagine the pain that Bobbi-Anne McLeod’s family and friends have been through over the last few months,” said Alison Hernandez, the police and crime commissioner for Devon and Cornwall.

“While there is no justice that can bring Bobbi-Anne back, I’m glad this case will be resolved quickly, and I truly hope the family will get the answers they need to put this terrible incident behind them.”

“I’d like to express my gratitude to the police for their efforts in bringing Cody Ackland to justice.”

“I’d also like to thank the people of Plymouth for their bravery, empathy, and incredible support during this difficult time for the city.”

“We now await Judge Linford’s sentencing of Ackland at a later date.” Our thoughts are with the McLeod family and those close to Bobbi-Anne who have lost a daughter, sister, and friend in such a cruel way.”

The killing sparked marches, candlelight vigils, and calls for immediate action to make Plymouth’s streets safer for women. A commission has been established to investigate violence against women and girls.

Exactly what happened that day?

It happened three months after Jake Davison, a 22-year-old apprentice crane operator with extreme misogynistic views, killed five people with a shotgun before turning the weapon on himself in Plymouth.

McLeod was last seen at a bus stop near her home in the Leigham area at 6 p.m. on Saturday, November 20. When she did not arrive at her destination, police, family, and friends began searching for her. Her headphones and tobacco were discovered at the bus stop, implying that she had been kidnapped.

On November 23, Ackland surrendered, telling police that McLeod’s body was found in woods near Bovisand Beach, seven miles from where the teenage girl went missing.

Ackland is scheduled to be sentenced next month, at which time the full facts of the case will be given.

1 thought on “Why did Cody Ackland kill Bobbi-Anne McLeod? Explained”