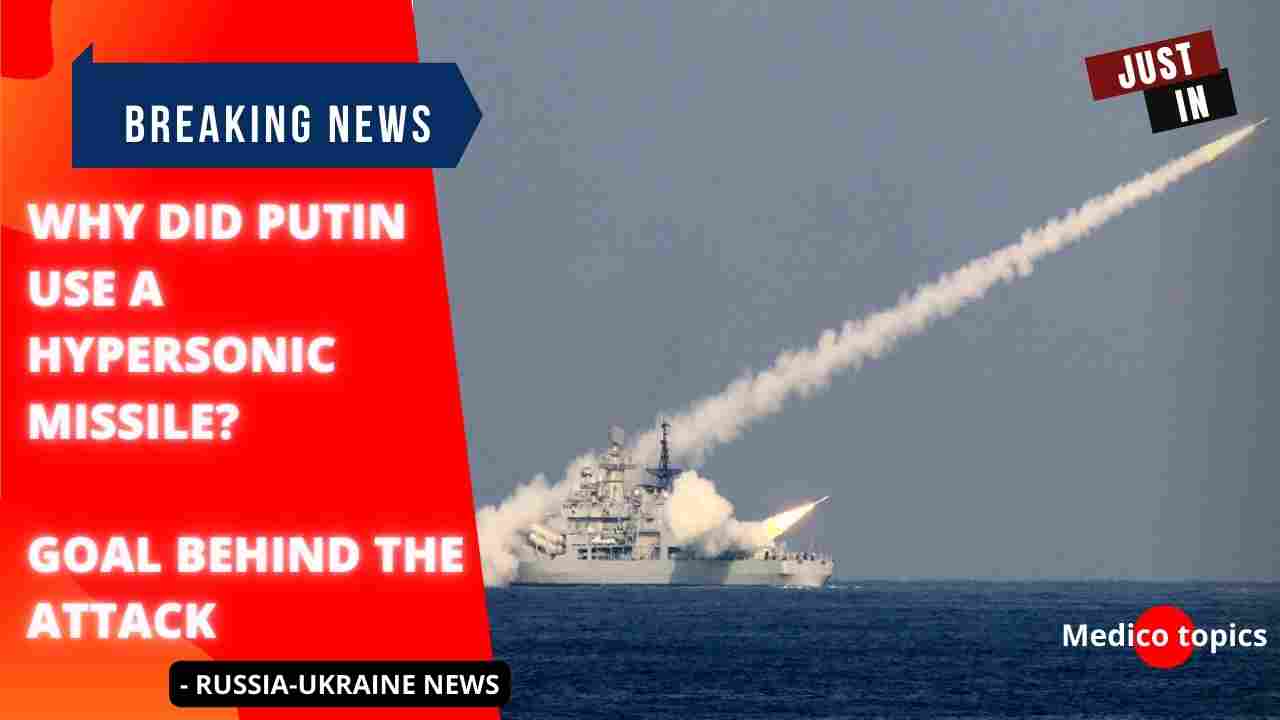 Why did Putin use Hypersonic Missile: On Friday, Russia used its latest Kinzhal hypersonic missiles to destroy an underground missile and ammunition storage facility in western Ukraine near the border with NATO member Romania, in what analysts said was the world’s first use of such weapons.

According to Western officials, the Defense Ministry announced the news on Saturday, on the 24th day of the conflict, as Ukrainians are putting up fierce resistance and Russian troops’ advance has stalled.

Russia has never admitted to using the high-precision weapon in battle, and state news agency RIA Novosti reported that the Kinzhal (Dagger) hypersonic weapons were used for the first time during the battle in pro-Western Ukraine.

“A large underground storage facility containing missiles and aviation ammunition in the town of Deliatyn in the Ivano-Frankivsk region was destroyed by the Kinzhal aviation missile system with supersonic speeds aeroballistic missiles,” the Russian Defense Ministry said Saturday.

When contacted by AFP, a spokesman for the Defense Ministry declined to comment.

The Kinzhal missile was one of a slew of new weapons unveiled by Putin in his 2018 State of the Union address.

Deliatyn is a village located outside of Ivano-Frankivsk in the foothills of the picturesque Carpathian mountains.

Hypersonic missiles can deliver conventional warheads faster and more precisely than other missiles.

However, their ability to deliver nuclear weapons may increase a country’s threat, raising the risk of a nuclear conflict.

Why did Putin use Hypersonic Missile: “This is the first case in the world of the use of hypersonic weapons in combat,” military analyst Vasily Kashin told AFP.

Russia leads the race in hypersonics, followed by China and the United States, with several other countries developing the technology.

Kashin, director of the Center for Comprehensive European and International Studies at Moscow’s Higher School of Economics, stated that hypersonic weapons were more effective at destroying underground storage sites than cruise missiles.

“Because of its high speed, a hypersonic missile can have greater penetration and destructive power,” he explained.

A hypersonic missile, like the much slower, often low-velocity cruise missile, is maneuverable, making it difficult to track and protect against.

However, some experts believe Russia is exaggerating the capabilities of its hypersonic arsenal.

According to military analyst Pavel Felgenhauer, the use of the Kinzhal would have little effect on the ground in Ukraine.

“Fundamentally, this makes no difference on the battlefield, but it has a psychological and propaganda effect that scares everyone,” he told AFP.

He claimed that Russian forces could have used advanced missiles because they were out of other weapons.

“The costs are prohibitively expensive,” he stated. “No one expected such a protracted war.”

He suggested on Twitter that Russia was either out of Iskander short-range ballistic missile systems or wanted to up the ante by deploying a nuclear-capable hypersonic missile in Ukraine.

Goal behind the attack

There are fears that Mr. Putin will attempt to seize control of the Ukrainian capital, Kyiv. Russian troops in Ukraine include forces deployed to Moscow’s ally Belarus for joint military drills that were supposed to end on Sunday but were instead extended indefinitely.

[…] Why did Putin use Hypersonic Missile? Goal behind the attack […]