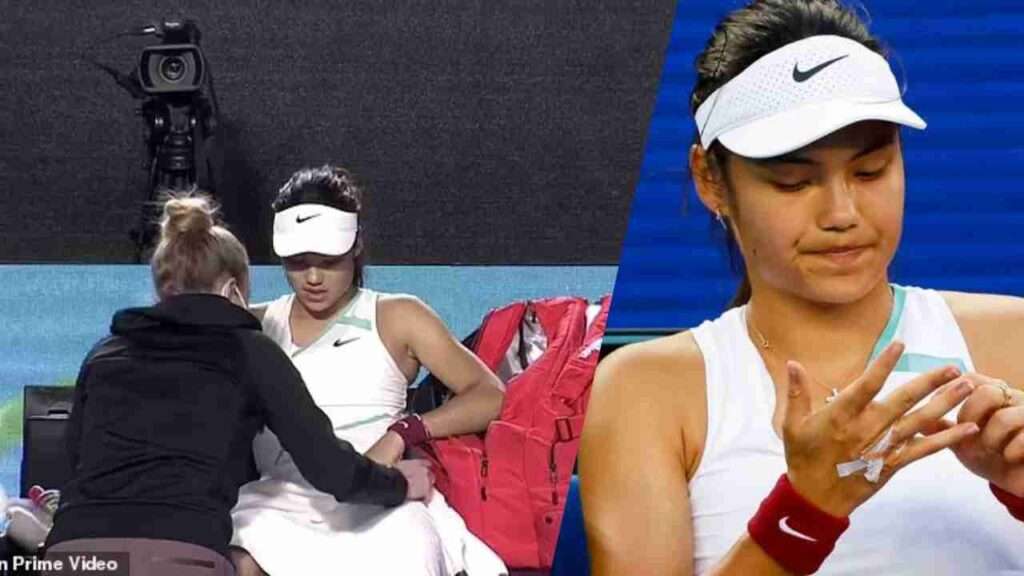 The Guadalajara Open’s top seed, Emma Raducanu of the United Kingdom, was forced to retire in the final set of her first-round match against Daria Saville due to a hip injury.

Emma Raducanu was forced to retire in the final set of a grueling maiden competitive performance since dropping out at the Australian Open due to a hip injury.

In the first round of the Guadalajara Open, the No. 1 seed was forced to retire after three hours and 36 minutes, with Australia’s Daria Saville progressing 5-7 7-6 (7-4) 4-3 from the longest match of the WTA season.

Raducanu was playing her first match since suffering a hand blister in a three-set loss to Danka Kovinic in the Australian Open second round last month.

The British star, on the other hand, put down an early marker, winning the first set after a grueling 80 minutes by coming back from an early break to break Saville in the penultimate game.

Raducanu, the reigning US Open winner, served for the match at 5-3 in the second set, but Saville broke back to force a tiebreak, which she won convincingly.

In the decider, both women looked to be playing despite the pain, with Saville suffering from leg cramps and Raducanu requiring an off-court medical break.

With her upper left leg taped, the world No. 12 returned to the court and played two more games, but the injury she had incurred caused her to retire from the match.

I’m more concerned about Emma’s injury history than her recent performance. She’s 19, and this is her first full year on the road, but it seems like this is happening a lot more these days. She had an issue with Wang in her final 2021 match even before the blisters in AO. I’m hoping she’ll be able to put it all together.

Speaking about the match, What the hell was going on? To be honest, this match was a mess. Emma could have won it in the second set when Dasha’s serve was visibly breaking down, but she couldn’t take advantage of the opportunity. (Of course, no one knew the severity of her injury at that movement)

This was a horrible loss. If the name tags were removed, it would appear like two of the top 200 players was playing. This match had 40 breakpoints and they didn’t even complete it.

I’m not sure what Raducanu should do next, to be honest. She hasn’t played much this year, and her season record is presently 2-3. I’m not sure if she should play more or fewer events, but whatever she’s doing right now isn’t working.

She’s played nine matches since winning the US Open. Six of them are losers. Two of them were injured. She’s playing in a lower and lower level of competition (she’s presently down to WTA125).

There’s something seriously wrong with her right now. I’m not sure if it’s psychological or if she’s just not good enough right now. Many have speculated that her victory at the US Open was only a blip on the radar (which I hope is not the case). Either way, she’s getting a lot of attention out in the wild right now, and if she doesn’t get her act together soon, her career could be over before it even begins.

Today’s outcome was not favorable. She does, however, have a tournament next week, as well as the Indian Wells/Miami double. A good run at one of them is all it takes to shift the course of her season. Fingers crossed.

But it’s not about the narrative; it’s about her performance since the USO. She hasn’t done anything since then to suggest that it wasn’t an anomaly and that we’re now witnessing a return to her real level.

There is no such thing as being too young to win a Grand Slam. Emma Raducanu, US Open 2021 Champion, will still be her name if she chose to retire today. Many players may only imagine themselves being GS champions. Hopefully, she has a long career ahead of her to figure things out, and it’s still too early to pass judgment on her after only six months on the road.

Get the latest Tennis news on Medico topics and its Twitter page.