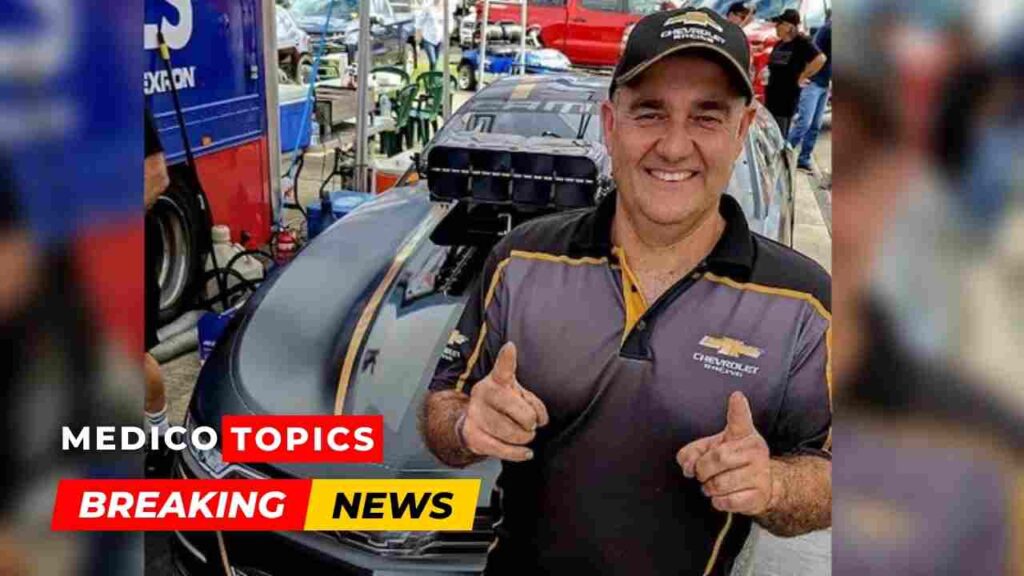 The popular Top Doorslammer Racer Sam Fenech passed away today. Let’s see who was Sam Fenech and more about the accident in detail.

Fenech was driving his new black and gold Camaro Doorslammer for Maurice Fabietti Racing when his car exited the track at the top end at high speed and flew over the fence, striking a Television camera platform.

Within seconds, track medical crews arrived on the scene to treat both Fenech and the unidentified TV camera operator.

The cameraman was brought to the hospital for treatment of his injuries, although preliminary indications indicate that his injuries are mild.

What happened to Sam Fenech?

Track rescue personnel treated Fenech while he was still in the wreckage of his car, but it was ended in vain.

Sam, a professional drag racer, was killed and a camera operator was hurt after a car lost control on a drag strip at Willowbank Raceway in Ipswich, west of Brisbane.

The statement from the Queensland Police stated,

“Police are investigating following a fatal crash at a Willowbank drag racing event this evening (January 7).

Initial information indicates just before 7 pm, a vehicle left the track and crashed into a camera tower.

The driver and sole occupant of that vehicle suffered fatal injuries as a result. In the racing accident, Mr. Fenech’s vehicle veered off the track and struck a camera tower.

The driver died on the spot as a result of his injuries, while two patients were treated on the scene, one of whom was categorized as critical and the other as stable.

A camera operator was transported to the Princess Alexandra Hospital with non-life-threatening injuries.

The Forensic Crash Unit is assisting Workplace Health and Safety with investigations.”

Police are investigating following a fatal crash at a Willowbank racing event this evening (January 7). The public are advised to avoid the area around Champions Way or exercise patience with likely traffic disruption. https://t.co/vJEmNr3erV pic.twitter.com/o8dQMagrhl

The Australian Top Fuel and Top Doorslammer Championships round were postponed for the rest of the meeting.

Who was Sam Fenech?

“It is with great sadness that Top Fuel Racing Australia announces that Sam, driver of the Fabietti Racing Doorslammer, has succumbed to injuries suffered in a racing accident at Willowbank Raceway and passed away this evening,” a statement confirmed around 8.40 pm AEST. Tributes flooded social media after the demise news broke out.

As if 2023 couldn’t already be terrible.. We lost an Aussie Drag Racing champion today at the track 🙁 RIP Sam Fenech! Unbelievable :'(

To witness this tragedy at Willowbank Raceway tonight is absolutely heartbreaking.

My heart goes out to Sam’s family, pitcrew, friends and supporters. Also wishing the cameraman a fast recovery too. 🙏🏼

Japan flight emergency landing: Is there any explosives found? Explained