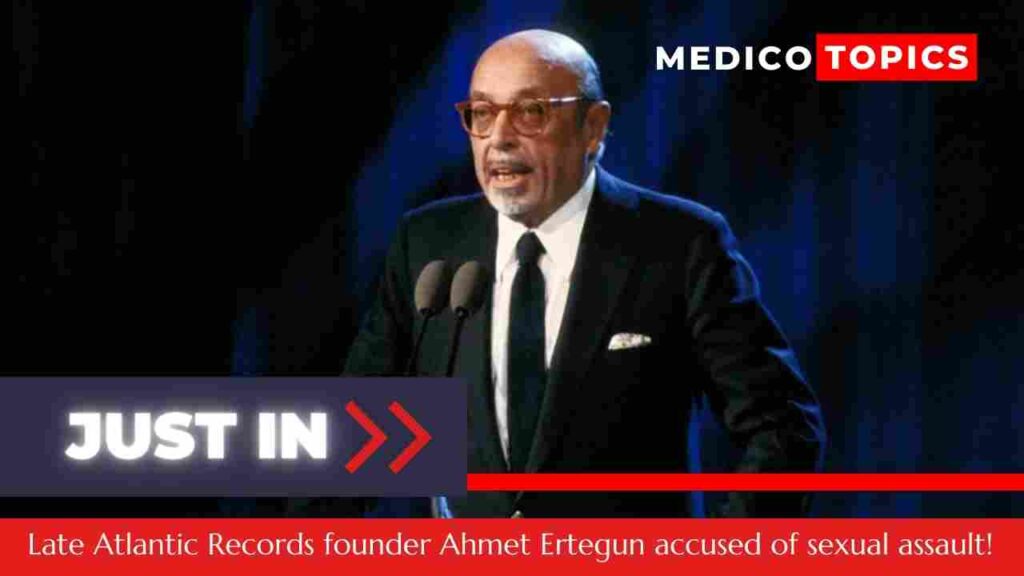 Ahmet Ertegun, the late co-founder  and  longtime  CEO  of  Atlantic  Records,  has  been  charged with multiple counts of sexual assault by a former music manager. Let’s see Who Jan Roeg is and about the sexual assault case in detail.

Who is Jan Roeg?

Jan Roeg, a former music manager, has claimed that Ahmet Ertegun, the late co-founder and longtime CEO of Atlantic Records, sexually assaulted her on numerous occasions over decades and that the record label hushed it up.

Who was Ahmet Ertegun?

Businessman Ertegun, who is Turkish-American,  is  internationally  recognized for  his  role  in  influencing pop music through Atlantic Records in the 1950s.

Ertegun, who  established  the  Rock  and  Roll  Hall  of  Fame  in  1983,  ran  Atlantic  Records  up  to the time of his passing from a brain injury sustained in a fall backstage at a Rolling Stones

She asks for monetary damages that a judge would determine after a trial.

Roeg brought the action under the Adult Survivors Act of New York, which was enacted earlier this year and took effect on November 24.

The new law permits victims of sexual assault to pursue legal action against their attackers even after the statute of limitations has run out.

She said that despite being made aware of several alleged sexual assault and harassment incidents involving the former executive, the record business did nothing to defend Roeg and other women.

Lawrence Pearson, Roeg’s attorney, in a statement on Monday,

“As Ms. Roeg shows in her Complaint, the ‘sex, drugs, and Rock n’ Roll’ culture in the music industry at companies like Atlantic Records was taken as license by powerful men like Ahmet Ertegun to engage in sexual assault and other abuse of women.”

“Now, Ms. Roeg and other survivors of sexual assault who in past years were forced into silence due to the threat of retaliation or loss of their careers can get justice under the Adult Survivors Act.”

Allegations of misconduct are taken “extremely seriously,” according to a statement released on Monday by Warner Music Group and Atlantic Records.

The music company told The Times through a spokesperson,

“These allegations date back nearly 40 years, to before WMG was a standalone company.”

“We are speaking with people who were there at the time, taking into consideration that many key individuals are deceased or into their 80s and 90s.

To ensure a safe, equitable, and inclusive working environment, we have a comprehensive Code of Conduct, and mandatory workplace training, to which all of our employees must adhere.

We regularly evaluate how we can evolve our policies to ensure our work environment is free from discrimination and harassment.”

In 1983, Roeg and Ertegun initially spoke with one another in an Atlantic Records office to examine the possibility of the label signing Caspar McCloud, one of Roeg’s clients.

Roeg’s contact lens fell to the floor as he was listening to McCloud’s music throughout the discussion.

Ertegun allegedly approached her from behind while she was attempting to pick up the contact off the floor and placed his hand up her skirt, according to the lawsuit.
The suit claimed that after Ertegun remarked Roeg’s legs, She yelled and moved away.

That discussion was interrupted by another executive manager from the record label.

Soon after, Ertegun requested to have dinner with Roeg and two other Atlantic executives.

On their way to a club after dinner, the two made a stop at Ertegun’s residence.

In that location, Ertegun allegedly put his hand on Roeg’s knee, which Roeg stepped away from, according to court records.

According to the lawsuit, Ertegun grabbed her and pushed her against the wall while continuing tomasturbate. Eventually, she was able to get out of the apartment.

According to court records, Ertegun persisted in making sexual approaches against Roeg for years, including further assaults that occurred in the 1990s and early 2000s.

Additionally, it was claimed in the lawsuit that Ertegun encouraged misogyny and violence toward women at Atlantic Records.

This allegedly included CEOs boasting about having sex with groupies while on business trips, ladies exiting executive offices dirty, and sexual comments made toward women during meetings.

The lawsuit said that at the time, the corporation adopted a “laissez-faire approach to sexual misconduct,” had no procedures to stop such behavior, and did not provide employees with any training on how to report misbehavior.

The complaint referred to Carvello’s stories of claimed sexual assault by Ertegun and also addressed the passage in her book where she referred to Roeg as Ertegun’s “girlfriend.”

However, the lawsuit claimed that Roeg never had any consented intimate or sexual activity with Ertegun.

How did Paddy Coen Jr die? Tipperary hurler cause of death Explained