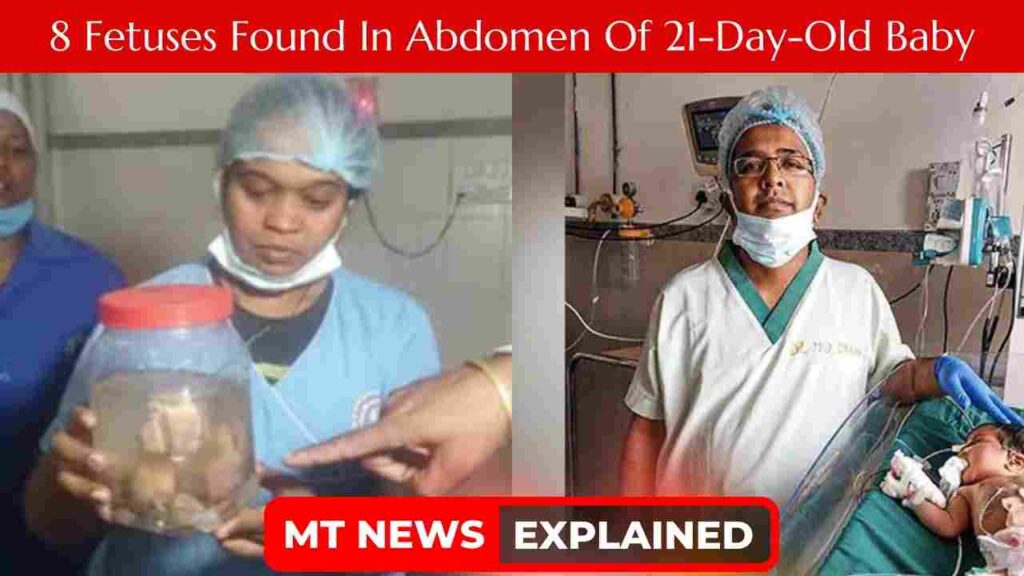 Doctors in a local private hospital reported discovering up to eight fetuses in the belly of a 21-day-old infant during an operation. Let’s see what is fetus in fetu and how doctors found 8 fetuses in an 21-day-old baby in detail.

What is Fetus in Fetu(FIF)?

A clump of tissue resembling a fetus develops inside the body of its twin in a condition known as fetus in fetu (or fetus in the fetus). The retroperitoneal region is where it is most usually found, however it has also been observed in other places. George William Young first characterized the phenomena in 1808.

There are two possibilities for how a “fetus in fetu” formed. One theory is that the mass starts as a typical fetus before enclosing its sibling. The mass may be a highly developed teratoma, according to the alternative theory. According to estimates, “fetus in fetus” happens in 1 in 500,000 live births.

In medical terms, it is called fetus-in-fetu (FIF), a rare entity in which one malformed vertebrate fetus is enclosed within the body of its twin, according to a journal of National Library of Medicine.

The infant was born on October 10 at a private hospital in the Ramgarh district of Jharkhand. The baby underwent a CT scan, and the results led doctors to believe that she had a tumor in her stomach. Ranchi was suggested to her for better treatment.

The infant is afflicted with a disorder known as “Fetus in fetu,” according to a team of specialists at Ranchi’s Rani Children’s Hospital, rather than a tumor. It is a syndrome in which the body of the living twin develops a mass of tissue that resembles a fetus.

The globe hardly ever sees such situations, which affect just one in 10,000 babies. Only ten of these cases have been documented in India, according to medical experts.

The stomach of a newborn baby aged 21 days was opened by medical professionals in Ranchi, Jharkhand. The surgeons were shocked to discover that the abdominal cavity contained up to eight unborn fetuses. As many as eight fetuses were found within a newborn baby in this case, according to the physicians, marking a first for the entire world.

The discovery of eight together is a first for the world, even though similar situations have occurred before.

According to Dr. Md Imran, who performed the surgery, the fetuses were between three and five centimeters in size and were located inside an abdominal cyst.

“According to the publications and journals that are currently available, the majority of FIF instances included a single fetus. Eight fetuses have not yet been documented anywhere, “Dr. Imran asserted. FIF only happens in one in every five lakh live birth, he continued, making it extremely unusual.

“The baby was admitted to the hospital when she turned 21 days. In initial diagnosis, a cyst or tumor-like substance was found. It was located below the diaphragm. We decided to remove it through operation and it was performed on November 1. Then, we discovered eight fetuses one after another inside the part,” he said.

The procedure was successful, and the infant is currently in a healthy condition. “She will be discharged in a week and the infant has been kept under observation”, he said.

Mrityunjay Kumar Singh, the medical director of Sadar Hospital, noted that such situations are uncommon worldwide and that this is the first instance in which eight unborn embryos were discovered together within a newborn’s stomach.

“Since it is a rare case, we are preparing it to be published in international journals,” the head of Rani hospital, Ranchi, Rajesh Singh told PTI.

Why jeff bezos in interested in purchasing the Washington commanders?

Who is Jay Barcelon? Husband Pleads Guilty in Fatal Stabbing of Rhona Fantone