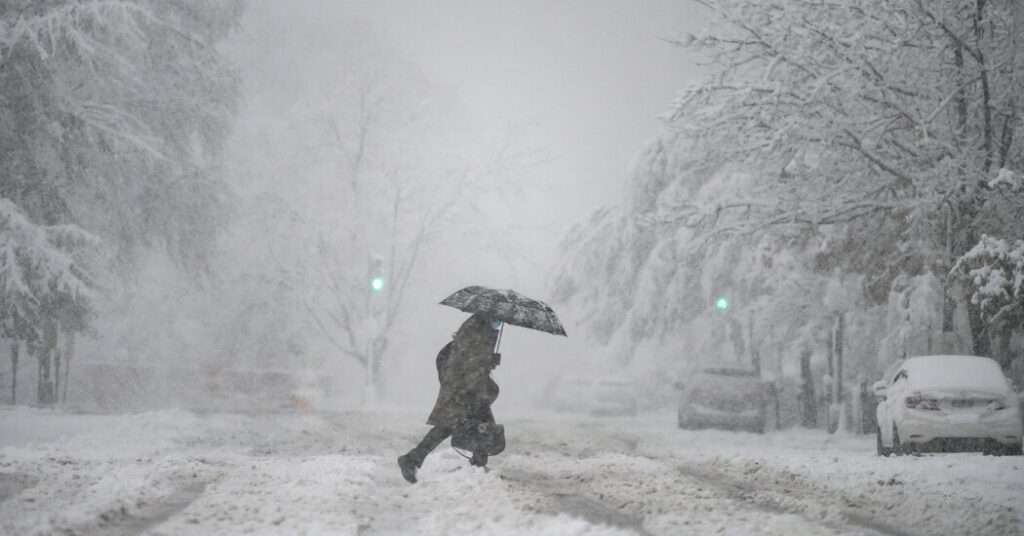 Every year, a winter storm is a major issue for the majority of us. And in this post let me walk you through What are the Dos and Donts during a Winter Storm?

What is a Winter Storm Warning?

A winter storm warning is issued when heavy snow, sleet, or freezing rain is falling at a fast rate, making driving extremely risky or impossible, and visibility is reduced to less than 1/2 mile.

High winds, along with blowing and drifting snow, exacerbate the danger.
Snowfall rates range from 1/2 inch to 2 inches “During a Winter Storm Warning, the wind speed can reach 50 miles per hour.

A blizzard warning is issued when heavy blowing and drifting snow is falling with winds above 35 mph and visibility of less than a quarter-mile for 3 hours or longer. Up to 3 feet of snow might fall “or more per hour.

Chicagoans should face a mix of heavy rain, sleet, and snow in the coming days as a winter storm develops, bringing transport worries and floods.

The National Weather Service issued a winter storm warning for La Salle, Kendall, Grundy, Kankakee, Livingston, portions of Cook, and parts of Will counties in Illinois early Thursday morning until the evening. In Indiana, the warning was also issued for Lake and Porter counties.

A period of increasing freezing rain and sleet is forecast late Wednesday night into Thursday morning, according to the advisory. Rain and sleet will likely transition to heavy snowfall by Thursday afternoon, with accumulations of 1 to 8 inches possible.

Officials say Chicagoans may expect more than 1 inch of snow per hour at periods Thursday afternoon, with wind gusts up to 40 mph.

From Wednesday night until Thursday evening, a winter storm watch has been issued for DeKalb, Kane, DuPage, Cook, LaSalle, Kendall, Grundy, Will, and Kankakee counties in Illinois, as well as Lake, Porter, LaPorte, Newton, and Jasper counties in Indiana.

A wind advisory is in place from 9 a.m. to 6 p.m. Wednesday in DuPage, La Salle, Kendall, Grundy, Kankakee, Livingston, portions of Cook, and parts of Will counties in Illinois, as well as Lake, Porter, Newton, and Jasper counties in Indiana.

According to the alert, wind gusts might approach 40 to 50 mph at times. Small tree branches might be blown down, and power outages are possible, according to weather officials.

Wednesday will begin with above-average temperatures, with highs in the mid-40s to low 50s forecast across the region.

Rain will begin to fall over the area Wednesday afternoon and evening, generating flooding risks in low-lying areas and along rivers and streams, according to these models. Because of the rain and the mild temperatures, ice jams may break apart, causing even greater flooding problems in the following days.

According to the National Weather Service, a flash flood watch is in force for Newton and Jasper counties in Indiana, although forecasters warn heavy rain is likely in many regions, particularly south of Interstate 80.

It’s possible that the rain may continue into Thursday morning, depending on how rapidly the temperatures drop. The day’s peak temperature will be recorded around midnight, and temperatures will continue to plummet throughout the day, changing precipitation into ice and ultimately snow by the time the storm departs late Thursday.

The storm’s last stages are where the most uncertainty still exists. On Wednesday, the system is predicted to travel fast into the Chicago region from the Great Plains, but the path it takes will ultimately decide how soon the precipitation changes from rain to snow, and how much snow might fall in some areas of the city.

If the storm pursues a more northerly path, snow might fall in the city and most of the suburbs on Thursday. While the exact amount of snowfall is unknown, moisture from Lake Michigan might contribute to lake enhancement, increasing snowfall totals in the city and the northern and western suburbs.

In the alternative, the storm might go farther south, affecting largely central Illinois and Indiana. The extreme southern suburbs of Kankakee County, as well as sections of northwest Indiana, may be affected by this storm, which is expected to dump a lot of rain and snow before moving on.

Regardless of which way the storm system travels, the Chicago region is certain to receive at least some snow on Thursday, with slippery and windy conditions causing major traffic problems throughout the day.

Significant lakefront flooding in both Illinois and northwest Indiana might be the last threat. On Wednesday and Thursday, strong northerly winds are forecast, potentially causing enormous waves and posing a threat to low-lying regions near the ocean.

Conditions are forecast to clear up by Friday, with temperatures below freezing to start the weekend.

How do you prepare for a winter storm? What to do during a Winter Storm?

If you reside in a city where power outages are regular, you should stock up on candles (just in case) and have a backup plan in case the power goes out for an extended period of time. In a city setting, kerosene heaters are more likely to kill you with carbon monoxide than to keep you warm; instead, go to a friend’s house.

The best plan is to stay at home. That means, in the winter, pay attention to weather forecasts so you don’t get caught off guard.

When walking, You’ll need appropriate clothing, and if the visibility becomes too poor, you’ll need to seek cover. It’s terrible to get lost while strolling in a winter storm.

What you should not do during a Winter Storm?

Don’t be caught off guard when driving in the winter. Being ready implies

Checking your car to verify it is winter-ready

Have emergency supplies on hand, such as a blanket or a snowsuit, as well as energy bars and basic equipment. The further you get away from large cities, the more gear you’ll need. When aid is far away, sand and a shovel can help you get out of the ditch.

Have all of the wires and plugs you’ll need to charge your phone from your car’s battery. A USB power socket adapter should be included as standard equipment. Don’t rely on the USB connectors provided by the manufacturer; the amperage may be low (e.g., 1/2 or 1 amp) and charging may take a long time. 2 amps is the absolute minimum.

If your winter driving abilities are lacking, swallow your ego and enroll in a winter driving course. Also, bear in mind that it is not July outdoors, so slow down and preserve your distance when the roads are snowy or slippery.

Failure to dress appropriately for the weather. This is something I have to constantly remind my kid about. Dress with layers. Remove layers when the temperature increases or you become heated from exertion. When the temperature drops or your activity level drops, reverse the process. A good pair of winter boots is essential. The treads feature a softer substance that stays soft in the cold, similar to winter tires for your automobile, giving you more traction. Remember to bring gloves, mittens, and caps. Now you know why you see a Canadian wearing a toque. They’re not really fashionable, but they keep your head (and ears!) toasty. Mitts are preferable to gloves. With mitts, fingers don’t become cold as quickly as they do in gloves.

If you don’t take care of your home, it will fall apart. Annually, not after the winter season, get your furnace examined. The same may be said for your hot water heater. Nothing is more unpleasant than waking up in a cold house or taking a cold shower. And, as other replies have shown, this is more likely to happen on Friday night of a three-day weekend or after the cold has already struck, when HVAC companies are busy than one-armed paperhangers.

If you snowbird, don’t forget to winterize your home. Yes, indeed. Many elderly in Canada follow the tradition. Do you despise winter? Then follow in the footsteps of the birds and head south. Make sure your house is prepared for your long absence if you do this. Turn off the water and empty your pipes. Remove all perishables from your freezer and refrigerator. From top to bottom, clean the house. Have someone you trust to check on your house from time to time, hopefully frequently enough to fulfill your homeowner’s insurance needs. Alternatively, you might buy an apartment unit where the condo board would take care of the majority of these problems.

These are the Dos and Donts that you need to know during a Winter Storm.

Get the latest news at Medico Topics and its Twitter page.

[…] What are the Dos and Donts during a Winter Storm? – Everything You Need to Know […]