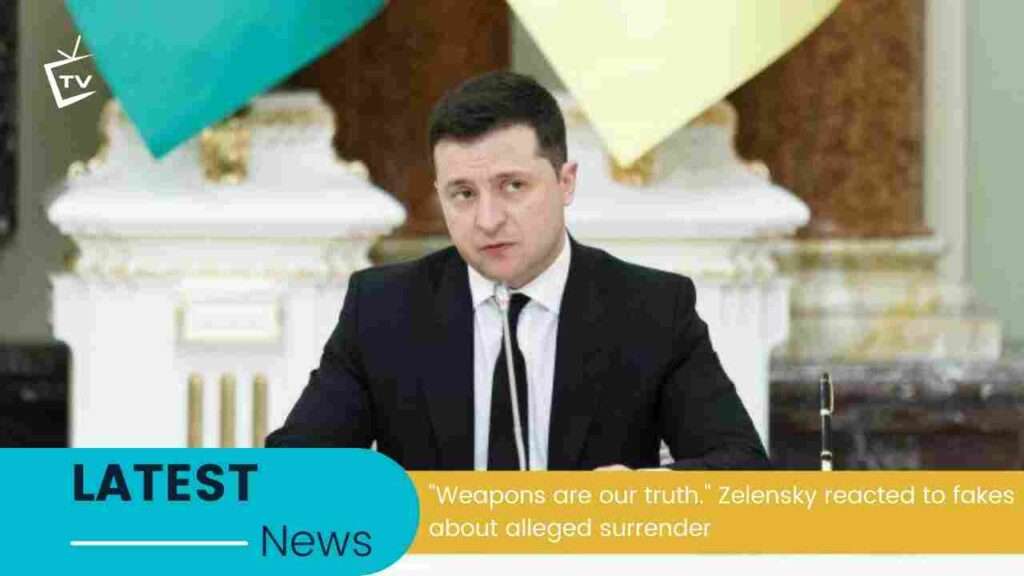 Zelensky surrender Fake news: On the third day of Russia’s war against Ukraine, fakes about surrender allegedly on behalf of President Vladimir Zelensky appeared on the network. According to him, this information cannot be trusted.

It is reported by Medico topics with reference to the Facebook Office of the President.

“Now a lot of fake information has appeared on the network that I allegedly call for laying down weapons to our army. So, I’m here, we won’t lay down any weapons, we will defend our state. Because our weapons are our truth, our truth is that this is our land, our country, and our children. And we will protect all this,” Zelensky said.

It should be noted that today an alleged statement by the president that the Ukrainian army is ready to lay down its arms began to spread through Telegram channels. The original source is a fake account with the same name as Zelensky.

Recall that earlier the Office of the President stated that the Ukrainian side would dictate positions in negotiations with Russia. See below

It also became known that Russia began redeploying reserves to the border areas with Ukraine. See below

Mykhailo Podoliak, an adviser to the head of the president’s office, spoke about talks with Russia on ending hostilities in Ukraine. He believes that the positions in this negotiation process will be different and will be dictated by Ukraine.

This was reported by Medico topics with reference to the words of the adviser to the head of the VP Mykhailo Podoliak.

“Any war ends with a negotiation process, but I think the positions in this negotiating position will be different. These will be positions dictated by Ukraine. It will set the conditions for what will happen next, including in Donetsk and Luhansk regions.” , – Podoliak declared.

He also added that after tonight it became clear how things will develop further.

Russia at the time of the morning of February 26 began the redeployment of reserves to the border areas with Ukraine.

It is reported by Medico topics with reference to the General Staff of the Armed Forces of Ukraine.

The Russian occupier continues the offensive operation against Ukraine.

The enemy has begun redeploying reserve units to the areas bordering Ukraine and continues to inflict air strikes on airfields, groupings of Ukrainian Armed Forces in the East and in the northern part of the Kyiv region. Single airstrikes were carried out in the areas of Sumy, Poltava, Mariupol.

From the Black Sea, the enemy launched Kalibr sea-based cruise missiles on the territory of Ukraine.

Management of the actions of tactical aviation of the Russian Federation takes place on the territory of Belarus and TOT Crimea.

In the Mozyr area, there are battalion tactical groups of the 35th combined arms army of the Eastern Military District, which can be used to strike at targets on the territory of Ukraine.

I hope I explained this blog (“Weapons are our truth.” Zelensky reacted to fakes about alleged surrender) in a better way.