Due to heat exhaustion and dehydration, Carlos Santana passed out on stage on Tuesday during a concert at the Pine Knob Music Theatre in Clarkston, Michigan, according to his manager Michael Vrionis. Let’s watch how did Carlos Santana collapse, what happened, and How is Carlos Santana’s health now.

What happened to Carlos Santana at the Michigan concert?

The 74-year-old guitarist was sent to McLaren Clarkston’s emergency room for evaluation and “is doing well,” according to Vrionis, who released a statement to Dailymail.com.

According to Fox 2, Santana fell while performing his song Joy approximately 40 minutes into his set. Concert organizers then announced that the performance had been postponed due to a medical problem and asked fans to pray for him.

When meteorologist Lori Pinson posted a photo of the incident on Twitter, Fox2 Detroit anchor Roop Raj commented that “medical personnel [were] on stage” and that the “crowd [was] requested to pray for him because of a “severe medical” situation.”

Pinson, who attended the performance, described what happened to the media outlet: “All of a sudden, the music suddenly shut down.” Although I didn’t see him fall to the floor on stage, everyone had him off to the side, and a chair suddenly appeared where there had previously been none. On stage, the medical staff started to hurry up.

He is still on stage right now, she continued. But you can’t see him directly since they pulled back a black curtain.

They just instructed us to go, yet a surprising number of people are still present, staring in disbelief at the mostly empty stage at Pine Knob in Clarkston. Santana was just a minute into a song he’d written with Chris Stapleton, according to a tweet from Barnas. “Carlos was calling for joy and healing.”

According to Pinson of Fox 2, Santana “performed all the originals everyone loves like Black Magic Woman” and “was making various statements about the situation of the world, all good” during the performance.

Carlos Santana waved to cheering fans as he was carried off the platform, Huff Post editor Philip Lewis wrote in a video he posted of the artist leaving the stage.

Vrionis announced that the performance scheduled for this Wednesday at The Pavilion at Star Lake in Burgettstown, Pennsylvania has been postponed. Additional information will be provided via Live Nation.

The musician is known for timeless songs like Evil Ways, Black Magic Woman, and Oye Como Va is now on Earth, Wind & Fire’s Miraculous Supernatural 2022 tour. The tour will culminate on August 27 in Tampa, Florida; there are still 19 shows left.

On September 14, he is scheduled to resume his residency at the House of Blues in Las Vegas. He will play a number of shows that month before performing for two weeks in November. 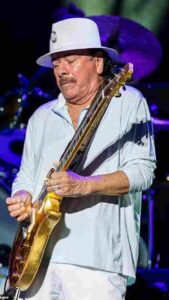 During a performance Tuesday (July 5) night in Michigan, Carlos Santana collapsed to heat exhaustion and dehydration. The guitar legend was captured at a performance in Clarkston, Michigan’s Pine Knob Music Theatre (formerly DTE Energy Music Theatre), an outdoor amphitheater located around 40 miles northwest of Detroit. Santana’s manager Michael Vrionis said that Carlos was rushed to the emergency room at McLaren Clarkston for observation and is now doing well. The Earth, Wind & Fire concert scheduled for tomorrow, July 6, at The Pavilion at Star Lake (formerly the S&T Bank Music Park) in Burgettstown, Pennsylvania, has been postponed. More information will be released through Live Nation, said Mr. Michael Vrionis.

To one and all

Last December, Santana postponed a string of performances in Las Vegas after having surgery to treat chest pains.

Following “an unscheduled cardiac operation,” Carlos Santana has postponed his December Las Vegas residency concerts at House of Blues at Mandalay Bay Resort & Casino. Eight performances by the guitarist were planned for that month.

Santana addressed his followers in a private video, saying, “Just wanted to share with you some clarity with specificity what’s been going on with my body.” “Rumors about this and that have been spreading here and there. I’m here to just clarify and crystallize the situation. Last Saturday, I had a situation where I needed my wife Cindy to drive me to the hospital because I was experiencing chest pain.

So, he said, “When we went there, we discovered that I needed to take care of it. “So I am, and I’m going to take a little break to make sure I refuel, relax, and catch up on my health so that when I play for you, I would play the way I’m used to playing and giving you 150 percent. If I can’t do that, I won’t attend. Apart from that, I really hope you and your family are happy, well, and at peace.

Santana’s representative has been contacted by Medicotopics.com for comment.

Courtney Reeser said You have touched our souls with kindness and compassion, please open your soul to our gifts of light and peace. Drink, heal, and rest, we can wait for your return.

Mary Peifer-Moore said, Please take care, you are important to many and to those closest to you. Wishing you healing. Thank you for all you have given me through your music.

Kat Gallego said, I am always praying for your health; peace and comfort, rest, and replenished spirit. Remember you cannot pour from an empty vessel, so take some time to refill and refuel. God bless you and your family.

Lynne Ontiveros Kaimuloa said We were blessed by an outstanding performance with Earth, Wind, and Fire opening for Carlos Santana here in Chula Vista, San Diego county. Please take care of your health because the sacrifice of touring is not lost when we have lost legends like Tom Petty at the end of a taxing tour schedule. While nothing beats the incredible shows, nothing is more important than the gift of your life and talents! Prayers for complete healing and sage wisdom in scheduling tour dates! God bless!

Shirley Smith said, Thank goodness it was nothing too serious….here’s to Carlos making a complete recovery and being well again real soon.

How did Olivia Quan die? Vancouver Engineer Cause of death Explained

How did Mona Hammond die? Cause of death Explained

[…] Corporation, and Nigeria Liquefied Natural Gas Limited. May his soul rest in peace KEEP READING, Watch Carlos Santana collapse during Michigan concert, Health Updates How did Lorraine Kelly loss her weight? Her Diet plan Revealed Follow us on Twitter to get […]