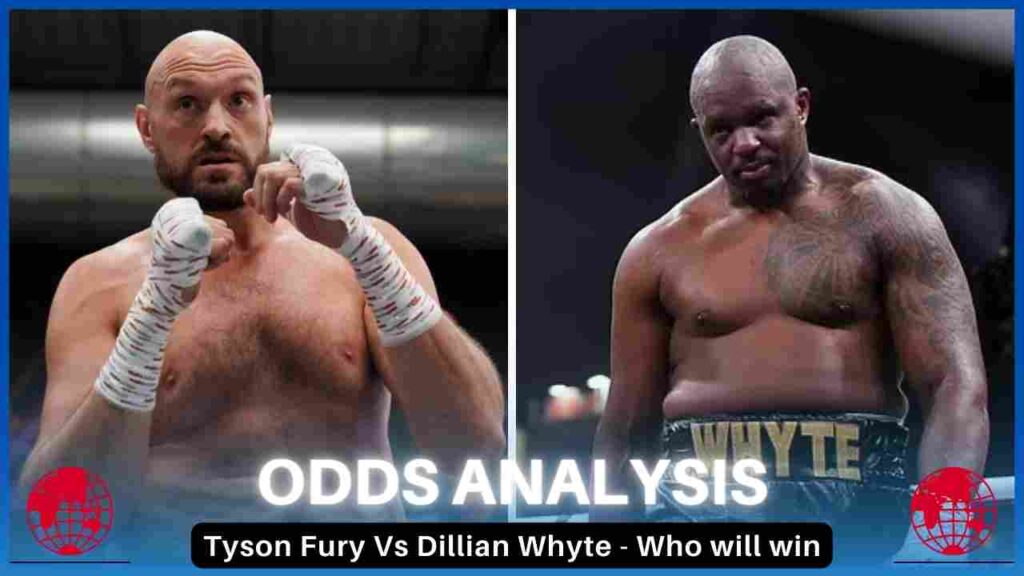 Dillian Whyte and Tyson Fury will compete for the WBC heavyweight championship on Saturday at Wembley Stadium. Let’s see Tyson Fury vs Dillian Whyte Who will win – Odds Analysis.

Tyson Fury, the World Boxing Council (WBC) heavyweight champion, will defend his title against fellow British boxer Dillian Whyte on April 23 at London’s Wembley Stadium. Whyte is the WBC interim heavyweight champion and the mandatory challenger for Fury’s title, having defeated Alexander Povetkin in his most recent fight to claim the interim title. Meanwhile, Fury has just completed his second consecutive title defense against Deontay Wilder.

Fury has a 31-0 record going into the upcoming PPV, while Whyte has a 28-2 record. For the first time in nearly four years, Fury is returning to the United Kingdom for a fight. The promoters for the pay-per-view (PPV) event are Frank Warren’s Queensberry Promotions and Bob Arum’s Top Rank, who won the bid for the rights for approximately USD 41 million.

A bit of commotion before the face off 👀@Tyson_Fury and @DillianWhyte want this to be about them, no one else 👊

Having said that, the Fury vs. Whyte PPV will also feature Anthony Cacace vs. Jonathan Romero for the WBO international super-featherweight title. At the same time, Tyson’s brother Tommy Fury will fight for the first time in eight months against Daniel Bocianski in a light-heavyweight bout.

What is their opinion?

“I see these long Whyte betting odds and laugh, he is a tough man,”.

“I believe we’re in for a real treat on Saturday night, and it’s coming soon.”

“I’ve done 12 long rounds before, and I can do it again,” Whyte says. We’ve put in a lot of effort, and I’m willing to go the extra mile.

“I’m not afraid to take chances; this is nothing new to me.”

“As usual, I’ll show up, do my job, and then vanish into the night.”

“After that, everything else will fall into place.”

“I’ve spent a lot of money on legal battles to get this fight, so I need to get this money back!”

“This fight means everything to me because Wembley is not far from where I grew up.

“I never expected to live this long; I’ve taken risk after risk, and I’m ready to go.

When will Tyson Fury vs Dillian Whyte be held?

The all-British event will take place on Sunday, April 24, with the main card beginning at 4 a.m. AEST. Fury and Whyte will enter the ring at 6.45 a.m. AEST, with the main event scheduled to begin at around 7.10 a.m. AEST.

Where will Tyson Fury vs Dillian Whyte be held?

Fury vs. Whyte will take place at London’s Wembley Stadium. Fury hasn’t fought in London since a 2015 victory over Christian Hammer.

Whyte has never fought at Wembley Stadium before, but he is accustomed to competing in the capital. After extra seats were released last week, the fight will be a record-breaking 94,000-capacity sell-out event.

Tickets for the fight are still on sale, having gone on general sale at 12 pm on Wednesday, March 2, 2022.

Prices vary greatly depending on how close you want to be to the action. The cheapest seat inside Wembley costs around £55, while the most expensive seat costs a princely £2,000.

Those who were unable to obtain a ticket to the fight will be able to watch it live on BT Sport Box Office.

In Saturday’s fight, Tyson Fury is the favorite. Fury is the more technically skilled boxer, with a more unconventional style. Fury will benefit from his height and reach advantage by staying in range and controlling the fight from the outside. He will, however, most likely try to follow up his knockout win over Deontay Wilder with a related victory over Whyte.

Joseph Parker, who battled Whyte and has been training with Fury, believes Fury will knock out Whyte in the middle rounds. David Haye, a British boxing legend, believes Whyte will win the fight. Fury’s confidence in his ability to go toe-to-toe with Whyte, he believes, will be his undoing.

Fury has stated that he intends to knock out Whyte. SugarHill Steward, Fury’s trainer, has also stated that he will go for the knockout. If he decides to fight in the pocket, Fury will give up his range and fight Whyte on his own turf. Whyte is a strong body puncher who excels at close range. If Whyte wins, it will most likely be by using hard hooks to the body to wear down the taller man.

The fight will most likely be closer than most people expect. Whyte has avoided Fury’s midgames and is well-prepared to enter the ring.

Where can I watch Tyson Fury vs. Dillian Whyte live?

BT confirmed the news in a tweet: “The time for chit-chat is over! After years of back-and-forth, the heavyweight showdown has finally begun!”

The event will cost £24.95 on BT Sport, the same price as Fury’s previous two fights against Deontay Wilder on the channel.

Times for Tyson Fury vs Dillian Whyte in different countries

How to watch Tyson Fury VS Dillian Whyte for free

Are there any free live streams?

ExpressVPN is compatible with a wide range of devices, including iOS, Android, Amazon Fire Stick, PlayStation, and Apple TV. Another great feature is that it comes with a 30-day money-back guarantee and three months free, allowing you to see if it’s right for you without any strings attached.

How to watch it in the UK?

In the UK, you can watch Fury vs. Whyte on BT Sport, but because it’s a pay-per-view event, you’ll need to purchase it from the BT Sport Box Office, which costs £24.95.

Because the fight is taking place in London, you won’t need to set an alarm to watch it, with the main card beginning at 7 pm and Tyson Fury and Dillian Whyte set to enter the ring at approximately 10 pm BST.

You can watch the event online, on the BT Sport Box Office app for iOS and Android, or via Chromecast and Airplay, in addition to BT TV, Sky, or Virgin.

How to watch the match outside the UK?

We’ve compiled a list of where you can watch Fury vs. Whyte in different countries around the world. However, if you’re traveling and discover that your usual coverage is geo-blocked, the only option we know is to use a VPN to connect to a country that is showing the fight.

The software is ideal for this because it allows you to change your IP address and appear to be in a different location – all while maintaining a secure, encrypted connection. Here’s how to get going.

Use a VPN to watch Fury vs. Whyte from anywhere.

How to watch the match in the US?

Fury vs. Whyte is a pay-per-view event in the United States co-promoted by Fox Sports and ESPN Plus. At around 5 p.m. EDT / 2 p.m. PDT, the Gypsy King and the Body Snatcher will enter the ring.

It will undoubtedly be an expensive fight, with the Fury vs Whyte ticket price set at $69.99 – significantly higher than anywhere else in the world. That fee applies regardless of whether you are a current Fox Sports or ESPN subscriber.

If you pay, you’ll be able to watch the fight live on the Fox Sports or ESPN Plus apps.

How to watch the match in Australia?

In Australia, too, it’s PPV or bust, with streaming service Stan airing Fury vs. Whyte.

The fight costs $60, but you can also be a subscriber to the service to purchase it.

The good news is that new subscribers can try Stan for free for 30 days before committing, and they can watch over 600 TV shows and over 1,000 movies.

After that, the streamer’s Basic plan costs AUS$10 per month, and you can pay up to AUS$19 if you want to stream to more than one device and get better video quality (up to 4K Ultra HD).

Fury and Whyte are expected to walk the ring on Sunday morning around 7 a.m. AEST.

How to watch the live stream in New Zealand?

Boxing fans in New Zealand can tune in to Sky Arena to watch Fury vs. Whyte.

It’s a PPV affair, as is the case elsewhere, but the price had yet to be confirmed at the time of writing. Coverage begins at 6 a.m. NZST, with the ring walks beginning around 9 a.m.

Anyone visiting New Zealand from outside the country, or vice versa, can use the VPN route outlined above to connect their preferred coverage just as they would at home.