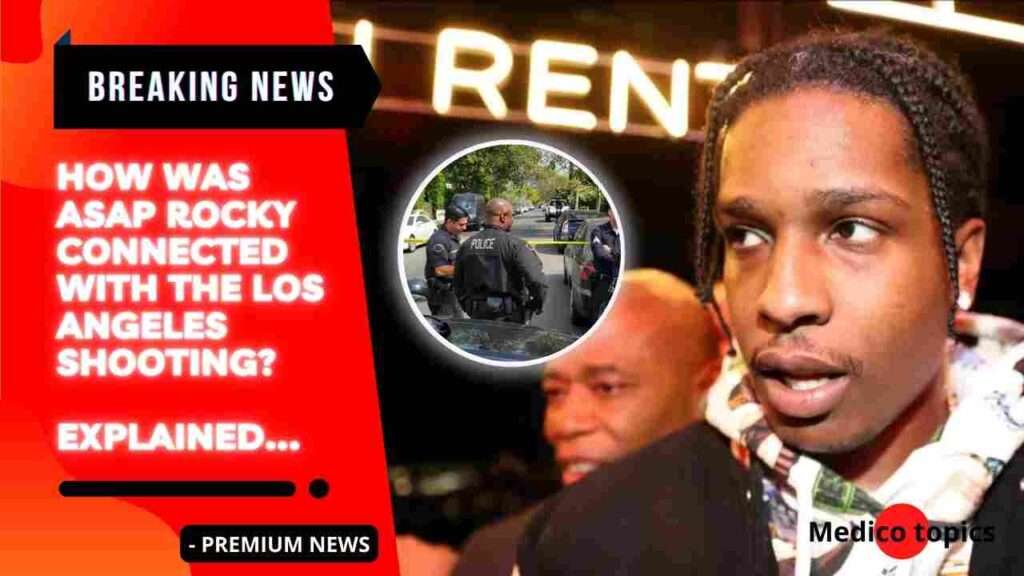 The Los Angeles Police Department stated in a statement that A$AP Rocky was arrested Wednesday at the Los Angeles airport in connection with a November shooting. Let’s see How is ASAP Rocky connected with the Los Angeles Shooting.

The artist, Rakim Mayers (A$AP Rocky), 33, had just arrived in Los Angeles after a private aircraft from Barbados with his pregnant girlfriend, pop singer and fashion mogul Rihanna. Celebrity media and paparazzi have heavily covered the trip.

The shooting happened in the Hollywood neighborhood on Nov. 6, 2021, at about 10:15 p.m., during an argument “between two friends,” according to a news release from the Los Angeles Police Department. “The disagreement erupted, and the suspect fired a revolver at the victim,” who was subsequently treated for minor injuries.

Rocky and two other guys then fled the area on foot, according to investigators.

The Los Angeles Police Department did not respond further. The rapper’s representatives did not immediately reply to a request for comment.

“Detectives worked carefully to verify and confirm the reported information, assisting in the identification of the suspect(s) involved,” police said in a statement.

33-year-old Rakim Mayers, a Los Angeles resident, also known as music artist A$AP Rocky, has been arrested in connection to a shooting that occurred in the Hollywood area in November of 2021. pic.twitter.com/YeV9w2udDL

Rocky’s attorney, Alan Jackson, told NBC News on Wednesday that his client had been detained.

How was ASAP Rocky Arrested?

According to TMZ, authorities served a search warrant at Rocky’s home in the Los Angeles region. Officers are seen using a battering hammer in the footage contained in the report.

The site provided more updates shortly after 2 p.m., stating that police ended their search of Rocky’s home, “leaving with a box of possible evidence”—supported by a photograph—”though it’s unclear what was inside.” Authorities further stated that ASAP was taken to the LAPD headquarters, his lawyer was called, and he will “be officially booked soon.”

Rocky was found guilty in 2019 for his role in a street brawl in Stockholm that became a well-observed worldwide event involving then-President Donald J. Trump. Rocky and two of his crew said they were acting in self-defense when they kicked and pummelled a 19-year-old guy they claimed was harassing their group.

However, using witness statements, a Swedish panel of four judges ruled that the group was “not vulnerable to immediate assault” and hence “not allowed to use violence in self-defense.” Rocky had already spent more than a month in Swedish custody awaiting trial when he was sentenced to no jail time.

Mr. Trump maintained a close eye on the matter when rap entrepreneur Kanye West requested his then-wife, Kim Kardashian, for assistance in relocating Rocky to the United States. (As a champion for prison reform, Kardashian had formed a strong connection with the White House.) The president called Sweden’s prime minister personally and then assigned a special envoy for hostage problems to watch the trial.

Swedish authorities, including the prime minister, consistently stated at the time that they would not intervene in the case, citing the rule of law as their reason.

Rocky, who has also worked as an actor and model, rose to prominence as the leader of the Harlem-based, internet-savvy rap group ASAP Mob early last decade, and has since recorded three major-label albums, collaborating extensively with musicians such as Kendrick Lamar, Drake, and Lana Del Rey.

Why did Ashley and Michael Darby announce separation? -Explained

How did Sandy Pisani die? What happened? Cause of death Explained