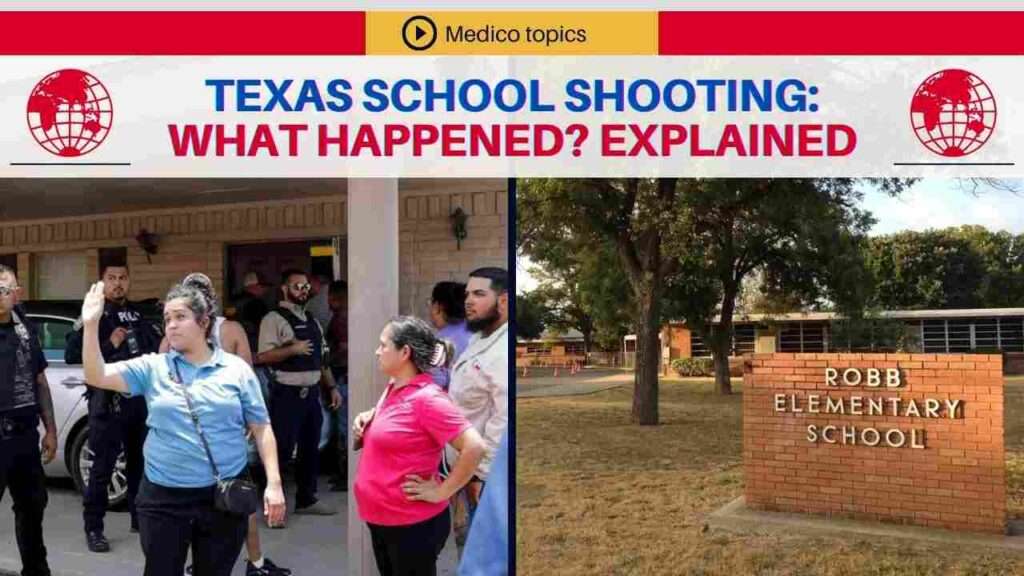 Following an active shooter incident at Robb elementary school, Texas on Tuesday, two people were killed and more than a dozen others were rushed to hospitals. Let’s see What happened and Who is the suspect behind Texas School Shooting.

After rushing into a Texas elementary school on Tuesday, a teen gunman killed at least 19 children and two adults, the latest case of gun-fueled mass murder in the United States and the country’s bloodiest school shooting in nearly a decade. Several people are hurt, including children. Some people are in grave danger.

After initial reports of the death toll were mixed up, the state attorney general’s office said that 18 children and two adults, including the gunman, had died. A spokeswoman for the Texas Department of Public Safety later told CNN that 19 students and two adults were killed, not including the perpetrator.

According to Pete Arredondo, chief of the Uvalde Consolidated Independent School District Police Department, who also addressed the media, the school’s student population comprises youngsters in the second, third, and fourth grades. Pupils in those grades were most likely between the ages of 7 and 10.

He also stated that the 18-year-old suspect, a Uvalde High School student, is also dead.

“He shot and killed 14 students in a brutal and incomprehensible manner, as well as a teacher,” Abbott said during a separate press conference.

According to Abbott, the guy also shot his grandmother before entering the school and opened fire again. He made no additional comment concerning her health.

Abbott stated that the shooter used a pistol and maybe a rifle.

According to Abbott, two responding police officers were among those injured. He believed that they would survive.

Uvalde Mayor Don McLaughlin did not confirm casualties, but said in a text message to ABC News that “this is a really bad situation.” He stated that the administration is attempting to contact parents before disclosing any information.

The Uvalde Consolidated Independent School District had previously stated that a shooter was located at Robb Elementary School and requested residents to avoid the area.

The school district tweeted, “There is an active shooter at Robb Elementary.” “Law enforcement is on the scene. Your assistance is required at this time through refraining from visiting the campus. More information will be released as soon as it is obtained.”

We’ve heard it was a police chase with a bailout, and the one bailout went to the school. We are not sure if that’s true or not.

We’ve also heard that it was a man who showed up there to kill his mom. Instagram posts exist. We’ll know until we have an official report.

More info on Texas School Shooting is getting updated.

What happened in Robb Elementary School?

According to a Facebook message by hospital CEO Tom Nordwick, thirteen students were rushed to the emergency room at Uvalde Memorial Hospital following the shooting at Robb Elementary. According to the CEO, two people have been transferred and one is in the process of being transferred.

Information at this time is that the active shooter at Robb Elementary is in custody. UMH is currently caring for several students in the ER. Immediate family of those students are to report to the cafeteria on the second floor. UMH staff will be in constant communication with the family members. If you are not an immediate family member, we are asking you to refrain from coming to the hospital at this time.

2:47PM UPDATE: UMH received 13 children via ambulance or buses for treatment. Two children have been transferred to San Antonio and one child is pending transfer.
Two individuals that arrived at UMH were deceased. No details are available.
Please refrain from coming to the hospital at this time.- From Uvalde Memorial Hospital Facebook Page

In addition, two persons were pronounced dead before getting to the hospital, according to Nordwick. Their names and ages have not been revealed.

In a tweet, University Health stated that it was treating a toddler as well as a 66-year-old lady who was listed in serious condition. The child’s condition is unknown at this time.

Who is the suspect in Texas School Shooting?

The suspect was arrested just after 1 p.m. local time, according to the Uvalde Police Department’s Facebook page. No more information was provided, including the suspect’s identity or the number of people hurt.

The suspect was arrested less than an hour after the Uvalde Consolidated Independent School District tweeted about an “active shooter” at the primary school.

Parents are asked to pick up students at the regular dismissal times at the child’s campus. There will be no bus transportation.
Officers will be on site to escort students to the parents cars.
Parents please be patient as lines will be long – From Uvalde Police Department’s Facebook page

“Law enforcement is on the scene. Your assistance is required at this time by refraining from visiting the campus. “More information will be released as soon as it is obtained,” the tweet read.

According to police and the school district, students were being transported to Uvalde High School for a reunion with their parents. However, the district requested that parents refrain from picking up their children. “You will be informed to take up kids after all students have been accounted for,” the district wrote in an update.

Thursday is the last day of school in the district.

The shooting came as the FBI released fresh numbers on Monday showing that active shooter occurrences in 2021 increased by more than 50% over 2020 and by 97 percent over 2017.

How did Jamie Bartlett die? What happened? Cause of Death Explained

Visa Outage across the country – When will the problem be sorted out?

Find the latest news on the Medico topic’s Twitter page.

[…] Texas School Shooting: What happened? Who is the suspect? Explained […]

0
Reply
How did Stephen Clinch die? What happened? Cause of Death Explained

[…] Who is the suspect in the Texas Shooting? What happened? Explained […]