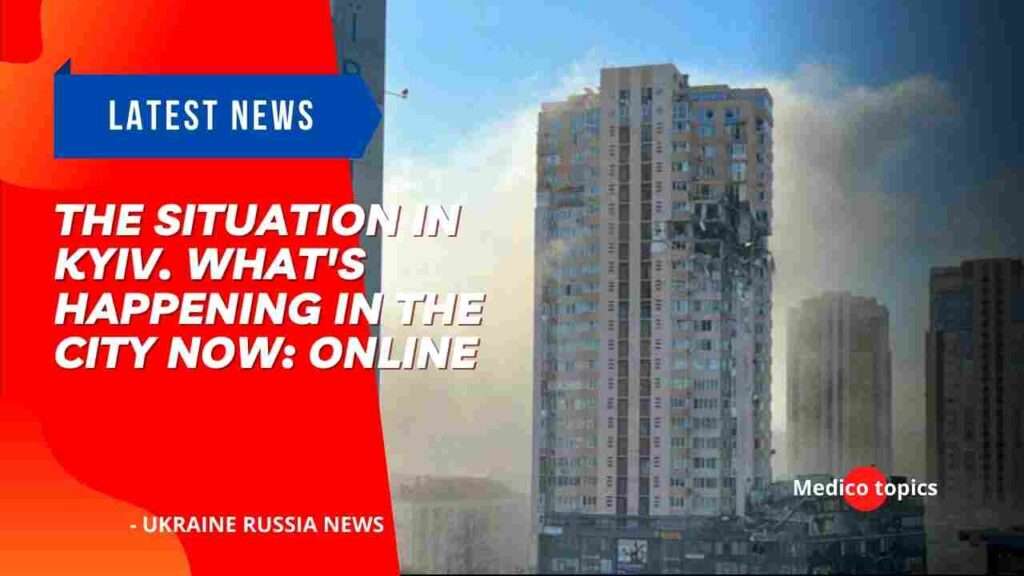 The Armed Forces of Ukraine, security forces, terrorist defense, and local residents continue to keep the defense of Kyiv. The night was difficult, the enemy tried to break into the capital. At the moment, the situation in Kyiv is under control, there are no Russian troops in the city.

Read more about the situation in Kyiv at the moment – in the text online Medico topics.

The Kyiv City State Administration, in a commentary to RBC-Ukraine, named the only condition under which curfews can be violated – when an air raid signal is given, you can go out to go to a bomb shelter.

16:27 Kyiv City State Administration has updated information on the curfew in Kyiv. It will start at 17:00 today and will run until 08:00 on Monday, February 28th.

13:25 According to Klitschko, for security purposes and for more effective defense, a curfew in Kyiv will operate from 17:00 to 08:00.

“This curfew time is introduced until the morning of February 28. All civilians who are on the street during the curfew will be considered members of the enemy’s sabotage and reconnaissance groups.”

13:18 The people of Kyiv filmed how they mark gas pipes on residential buildings.

13:05 Klitschko asked businesses to help the people of Kyiv.

“I also appeal to business. The city is doing everything it can today. Help the people of Kyiv too. They are trying to destroy Kyiv and our country. We must survive!” – stressed the mayor.

12:45 “We withstood and successfully repulsed enemy attacks. The fighting continues. In many cities and regions of our state. But we know what we are defending – the country, the land, the future of children. It is our army that controls Kyiv and key cities around the capital”, Zelensky said in his video message.

12:40 A fire broke out in a warehouse in Kyiv down Volynskaya Street after a shell hit. 2 people died.

12:30 As a result of the shelling of Zhuliany airport, a shell hit a residential building.

“The house was destroyed from the 17th to the 21st floors. 21,22,23 were checked and 24 were not injured. Rescuers are evacuating the entire house, the exit from the apartments is complicated. Firefighters were extinguishing individual fires,” the State Emergency Service said in a statement.

There were no casualties, 6 people were injured, 80 were evacuated.

12:20 Kyiv residents are asked not to cross the bridges across the Dnieper. According to the Interior Ministry, enemy saboteurs are constantly trying to land on the left bank. All bridges of the capital are taken under protection. They will open fire on targets that will try to cross the bridges from the left to the right bank. 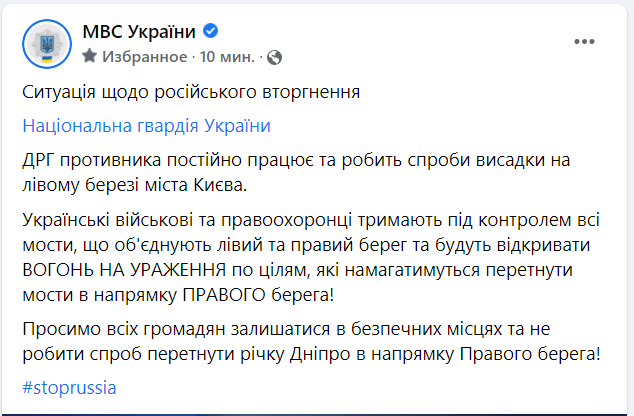 12:10 Klitschko also said that public transport operates in the city. Its quantity is sufficient to transport critical infrastructure workers. The red line of the metro does not work, but the stations can be used as shelter from shelling.

“The military, the police, the National Guard, Troops, volunteer battalions are protecting our city. We are equipping checkpoints in the capital, so movement around the city will be limited and difficult,” Klitschko said.

12:08 According to the mayor of Kyiv, Vitali Klitschko, there are no Russian troops in Kyiv. But there are saboteurs.

“The night was difficult, but there are no Russian troops in the capital. The enemy is trying to break into the city, in particular, from the direction of Gostomel, Zhytomyr. The aggressors have been neutralized there. Now, unfortunately, sabotage groups are operating in Kyiv,” Klitschko said.

12:00 “The main thing I want to say is that the situation is completely under control throughout the territory of Ukraine. Attacks by the Armed Forces of the Russian Federation are going in all directions in almost all major cities of Ukraine. But, this did not happen before, but there is now – no one from the leadership of the regions, local authorities have not left their places. They work, despite the work of the DRG and constant clashes with the aggressor troops,” he said.

We will periodically update The situation in Kyiv here.

Get the latest news on medico topics and its Twitter page.

[…] All up-to-date information about the situation in Kyiv can be read in our online broadcast. […]

0
Reply
Situation in Kharkiv right now: What is happening in the city?