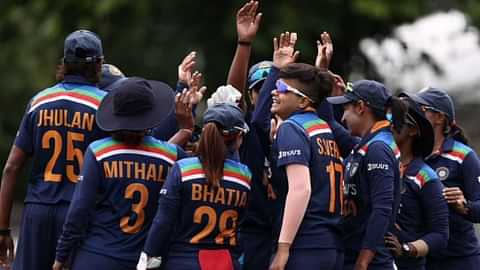 The Indian team for the ICC Women’s World Cup 2022 has been announced. A 15-member team has been announced under the leadership of Mithali Raj. Harmanpreet Kaur has been named vice-captain for the World Cup. Richa Ghosh and Tania Bhatia have also been selected as wicketkeepers. Faces like Jemima Rodriguez, Shikha Pandey, Harleen Deol, Radha Yadav, Veda Krishnamurthy could not find a place in the Indian team. The most surprising thing is that Jemima was not selected. She recently starred in The Hundred in England and the Women’s Big Bash League in Australia. (ICC Women World Cup 2022: Indian Squad announced, Jemimah Rodrigues-Shikha Pandey gets dropped)

Sabineen Meghna, Ekta Bisht and Simran Dil Bahadur have been included in the standby squad. The first match of the Indian team in the Women’s World Cup will be played on March 6, 2022 against Pakistan at Toranga. After Pakistan in the World Cup, India will play against New Zealand (March 10), West Indies (March 12), England (March 16), Australia (March 19), Bangladesh (March 22) and South Africa (March 27). Before the World Cup, India will play an ODI series against New Zealand. The series will be played from February 11. There will be five matches. The ODI series runs until February 24. One match will be played in Napier and two matches each in Nelson and Queenstown.

India will also play a T20 match against the hosts on the New Zealand tour. The match will be played on February 9. A team has also been announced for this. A 16-member squad has been selected for the match under the leadership of Harmanpreet Kaur.