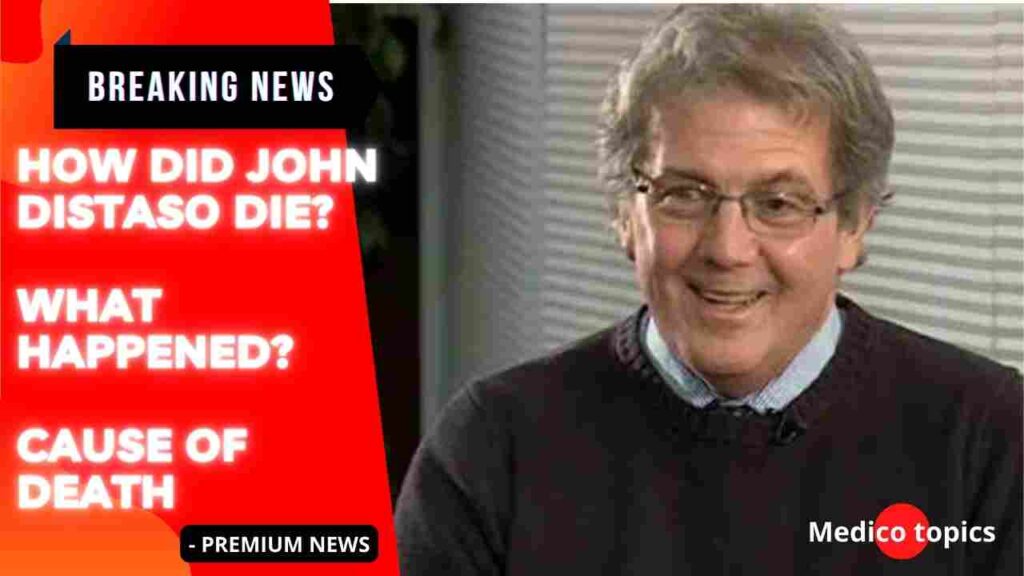 John DiStaso, the “dean” of New Hampshire’s political press corps and a WMUR reporter, died at the age of 68. DiStaso is survived by his wife and two sons, and he covered 11 presidential primaries. Let’s see more about how did John DiStaso die.

Who was John DiStaso?

DiStaso was born in Paterson, New Jersey, and attended public schools before attending Villanova University and graduating in 1975. In 1979, he received his master’s degree from William Paterson University.

DiStaso, who has worked as a political reporter for WMUR for the past seven years, began his New Hampshire journalism career as the Seacoast area reporter for the New Hampshire Union Leader. From early 1980 to the spring of 2014, he worked as a staff reporter and later as the Union Leader’s senior political reporter, covering a wide range of public policy issues as well as dozens of political campaigns and candidates.

He was also heavily involved in the Union Leader’s coverage of major stories in the State House, such as the Seabrook nuclear power plant, the landmark Claremont school funding lawsuit, and the historic impeachment and subsequent acquittal of a former state Supreme Court Chief Justice.

Beginning in 1982, his weekly political column quickly became a “must-read” for anyone interested in New Hampshire politics. During his time at WMUR, he continued that tradition with the “New Hampshire Primary Source” column, which appeared every Thursday morning in the inboxes of thousands of subscribers.

DiStaso interviewed four current presidents as well as numerous candidates from both political parties. In total, he covered 11 New Hampshire primaries and planned to cover a 12th.

He has appeared on television as a panel journalist in many nationally televised presidential primary debates, as well as numerous Granite State Debates. During his time at WMUR, he wrote daily for WMUR.com and frequently appeared on WMUR-TV to provide analysis and context for political stories covered by our television political journalist.

He was the news editor of the New Hampshire Journal political website from April 2014 until joining WMUR in April 2015.

John DiStaso Cause of death

John DiStaso, New Hampshire’s most experienced political writer and often referred to as the “dean” of the state’s political press corps, died after a prolonged illness. He was 68 years old.

His wife, Diane, and sons, Dante and Nicholas, survive him. He and his family have been residents of New Boston since 1993.

From 1 to 4 p.m., the Lambert Funeral Home on Elm Street in Manchester will be open to the public. The 30th of April.

How did John DiStaso die, John DiStaso, who died this week at the age of 66 after a long illness, was a Granite State institution in his own right, and he leaves behind an incredible legacy.

Senator Maggie Hassan issued the following statement in response to the death of reporter John DiStaso:

“John DiStaso was a political reporting giant.” He established the gold standard for First in the Nation primary coverage, chronicling it for decades, with Granite Staters and Americans across the country relying on him for scoops, updates, and analysis. Granite Staters are among the most informed and engaged voters in the country, thanks in large part to John’s unwavering dedication to sharing New Hampshire political news on a daily basis. My thoughts and prayers are with his family, friends, and everyone who knew and loved John. I am confident that his legacy will live on in political reporting for decades to come.”

It is with a heavy heart we at @WMUR9 report the passing of our friend & colleague John DiStaso. Old-school, relentless & always first to report — we’ve lost a truly legendary figure in the world of political journalism. Rest In Peace, John.

No one will ever replace John DiStaso, the top political reporter who always got the scoop. He was a force in New Hampshire politics and his loss will be felt across the country. My prayers are with his family and loved ones.

I hope Renny Cushing, Kathi Rogers, Caroline French, Barbara French, and John DiStaso are having a great time talking #NHpolitics together tonight. It’s been a rough five weeks for the rest of us. #RIP

When I arrived in NH 20 years ago, I got an apartment, a cell phone, and put a post-it note on the wall with the words “beat DiStaso.” There was a reason. He was the gold standard of New Hampshire political journalism.

I hope we’ve resolved all doubts about how did John DiStaso die!