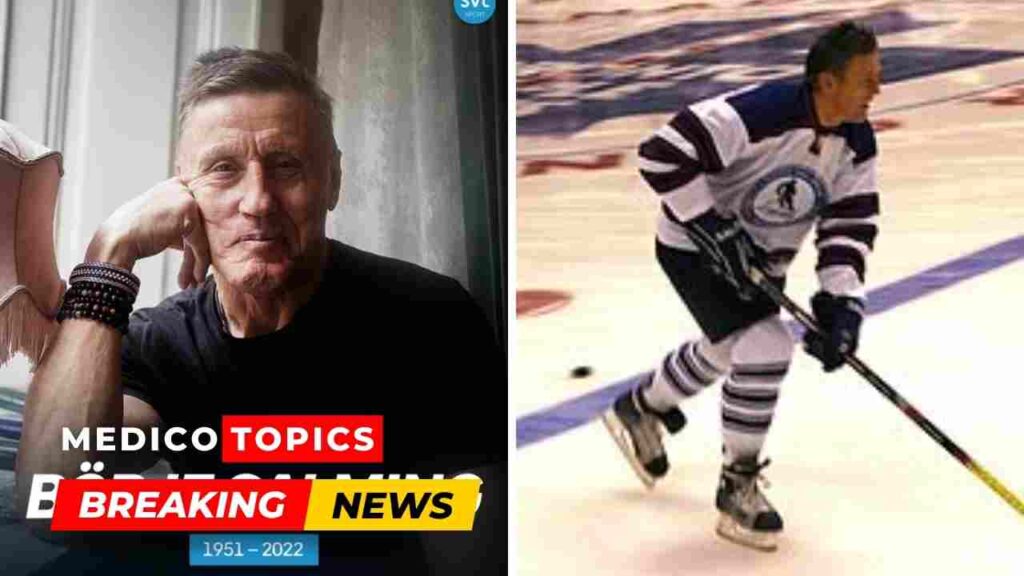 Börje Salming, a former player for the Toronto Maple Leafs, passed away on November 24, 2022. He was 71. Let’s see how did Former Maple Leafs player die and Borje Salming cause of death in detail.

How did Börje Salming die?

On behalf of the Salming family, the team issued a statement on Thursday confirming his passing. They noted that he was “a pioneer of the game and a legend with an unbreakable spirit and unquestionable toughness.”

Brendan Shanahan, president of the Maple Leafs, wrote: “He helped open the door for Europeans in the NHL and defined himself through his play on the ice and his contributions to the community.”

“Börje became a member of our hockey family fifty years ago when he signed with the Maple Leafs. Our hearts go out to his wife Pia, his kids Theresa, Anders, Rasmus, Bianca, Lisa, and Sara, as well as his brother Stieg.

Mayor John Tory shared his condolences to Salming’s family, loved ones, and Toronto hockey fans following the news of his passing. “From Sweden to Toronto, ‘The King’ will be remembered for the incredible impact he had on our city,” Tory said in a statement Thursday. “I’m thankful he was able to be here earlier this month for such a courageous and loving moment on the ice.”

Börje Salming cause of death

Borje Salming cause of death is ALS. Salming announced in August he had been diagnosed with ALS.” I have received news that has shaken my family and me,” he said at the time “The signs that indicated that something was wrong in my body turned out to be the disease ALS, also known as Lou Gehrig’s disease.”

Börje Salming passed away after a fight with amyotrophic lateral sclerosis (ALS.) disease. Salming, who spent 16 seasons (1973–1989) with the Toronto Maple Leafs and was elected into the Hockey Hall of Fame in 1996, acknowledged that there is no cure for ALS at this time.

“In an instant, everything changed. I do not know how the days ahead will be, but I understand that there will be challenges greater than anything I have ever faced.”

MapleLeafs had a very special event to honor Börje Salming. The former Leaf’s defenseman was honored by the team earlier this month in a touching ceremony that also included former players Darryl Sittler and Mats Sundin.

The Swedish hero, who continues to hold the record for the most goals scored by a defenseman in Leaf’s history, is currently battling ALS but “came home” to Toronto for the weekend on November 13, 2022, NHL.

ALS is a degenerative illness of the neurological system that causes paralysis, the inability to swallow, respiratory failure, and finally death.

At Scotiabank Arena, Salming’s #21 jersey is suspended in the rafters. Only one of the Leafs’ 19 retired numbers is his. Salming represented Sweden outside of the Leafs at the 1992 Winter Olympics, three Canada Cups, and four IIHF World Championships.

Who was Börje Salming?

Anders Börje Salming, sometimes known as “The King,” was a Swedish professional ice hockey defenseman who played for 23 seasons with Brynäs IF, the Toronto Maple Leafs, the Detroit Red Wings, and AIK. He was born on April 17, 1951 in the village of Salmi in Kiruna, near Torneträsk in Jukkasjärvi Parish.

One of the first European players to have a significant influence on the National Hockey League. Salming is frequently regarded as a national hero in his native Sweden and a trailblazer for European athletics (NHL). He was one of the top defensemen of his time and was selected for six straight NHL All-Star teams.

Salming is best known for his lengthy tenure with the Maple Leafs, who retired his number 21 in 2016. He also owns the franchise record for most assists among other records. Salming represented Sweden internationally and earned two World Championship medals.

Before joining Brynäs in Sweden’s top level from 1970 to 1973, Salming played in Division 2 with Kiruna AIF. Salming was a member of the 1971 and 1972 Brynäs teams that won the league championship. On May 12, 1973, the Toronto Maple Leafs signed Salming as a free agent.

At the start of the 1973–74 NHL season, Salming played his first NHL game for the Leafs against the Buffalo Sabres. He was honored as the game’s outstanding player following a 7-4 triumph. Salming finished the season with 39 points.

Late in a game between the Leafs and the Reds on November 26, 1986, Salming was knocked to the ground in front of the Leafs’ goal. Red Wings skater Gerard Gallant cut Salming’s face unintentionally. More than 200 stitches were used during the cosmetic surgery for the face injury.

Salming played his 1,000th NHL game on January 4, 1988, becoming the first player of European descent and training to do it. In a surprise pre-game ceremony on January 27 (in Salming’s 1,011th game), his parents and friend Inge Hammarstrom presented him with a car as a token of appreciation. This ceremony was modeled by one given by the Philadelphia Flyers to Bill Barber.

Maple Leafs legend and NHL trailblazer Börje Salming has passed away at the age of 71. Borje Salming cause of death is ALS.

Just two weeks ago, Börje Salming got to courageously give a final goodbye to Leafs fans. The love was returned with a standing ovation.

throwback to when börje salming got 300 stitches and the coolest scar because gerard gallant accidentally stepped on his face. rip legend.

Many have & will speak about Börje Salming the hockey legend. What a loss his passing is to the sport, but it’s obvious for Willy and some of the other Leafs this is a personal loss. “It’s a terrible disease, so at least now he’s not hurting in that way anymore.”

The Canadiens mourn the loss of Börje Salming. We would like to extend their condolences to his family and the entire Toronto Maple Leafs organization. He will be remembered not only as an incredible player, but as an even greater human being.

How did Moisés Fuentes die? Mexican boxer cause of death Explained

How did Judi Billing die? Hertfordshire Councillor Cause of death Explained

[…] Borje Salming was a famous hockey player who lost his life to ALS just 24 November 2022. He was hospitalized for several days. Many thought that he might commit suicide after his death. We are here to tell you that this is false information. You should not believe this. Please share. If you have information about Borje Salming’s death, would you please share it? Share your thoughts by clicking here. […]