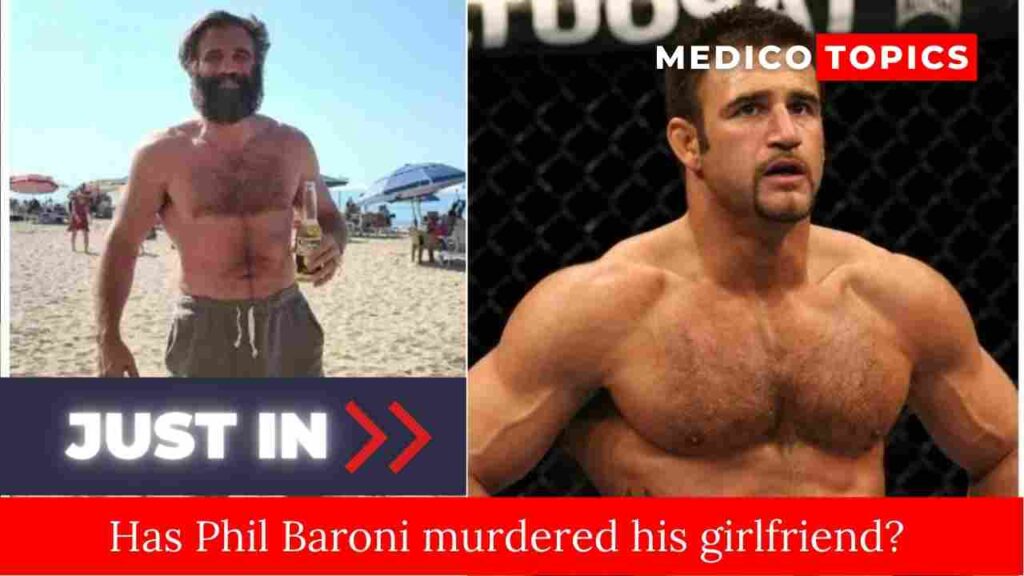 According to reports, Phil Baroni, a former UFC fighter, was arrested in Mexico after being accused of killing his girlfriend. Let’s see about it in detail.

Has Phil Baroni murdered his girlfriend?

According to Tribuna De La Bahia, the two were arguing inside a hotel in San Pancho at the time of the alleged incident.

The former mixed martial artist acknowledged throwing the victim into the shower, where she hit her skull and her away shortly after.

She allegedly admitted to cheating on him, according to Baroni.

According to reports, Baroni voluntarily alerted authorities, who discovered the victim’s naked, lifeless body wrapped in a sheet along with bruises and wounds to her face.

At the time of the incident, he was apparently under the effects of drink and drugs.

“Baroni beat his girlfriend, a Mexico City native, to death in San Pancho, Nayarit, México. He alleges he threw her inside the shower with force after she told him she had cheated where she hit her head and passed away minutes later.”

Police say they found her naked in bed covered with a sheet with multiple evidence of being struck, bruising in her face and no vitals. It was Baroni who alerted. He’s being held and charged with murder. 2/2.

Michael Bisping, a former UFC fighter, was shocked to learn the news.

I’m really hoping this is a sick joke. Phil Baroni arrested for murdering his girlfriend??? https://t.co/Ah4QsuAue1

The woman was found to be naked on a bed that had a bed sheet when the police got on the scene. She had visible signs of beatings and bruises on her face, but doctors immediately declared her dead.

The two got into a fight, according to Baroni, who allegedly informed the police that he started smoking marijuana and drinking beer in his room around 3 o’clock. Baroni’s fiancée allegedly confessed to him that she was having sex with another man throughout the fight.

The ex-UFC fighter then threw his girlfriend into the shower, causing her to strike her head on the floor.

‘NYBA’ did assist Phil Baroni’s girlfriend in getting up and then placed her on the bed as she struggled to stand. He then took her clothing off and covered her with a bed sheet.

According to the report, Baroni’s girlfriend next requested a cigarette and a beer. He left the room to obtain them, and when he came back, he saw that she was missing all of her vital signs. According to the article, Baroni was detained on suspicion of murder.

To determine the precise cause of death, an extensive investigation is currently under progress.

Baroni was a founding member of the UFC, having made his promotional debut at UFC 30 back in February 2001. Over the course of two stints with the company, he engaged in ten fights, recording a combined 3-7 record.

Baroni’s professional mixed martial arts career came to an end in 2019 with a record of 16-19.

He ended his MMA career in 2019. After showing support for Jonathan Koppenhaver (aka War Machine), who had been convicted of many felonies for raping, abusing, and attacking his ex-girlfriend Christy Mack and her partner, Baroni is said to have been sacked from Bellator in 2014.

As reported by MMA Weekly at the time, Baroni has also had a few run-ins with the law over the years, including an arrest in 2007 for “one felony count of Threatening a Public Servant and misdemeanor counts for Disorderly Conduct and Resisting Officers Without Violence.”

Below are images showing Phil Baroni being questioned by Mexican authorities:

Phil Baroni has been arrested for murdering his girlfriend in Mexico pic.twitter.com/5ujYsGtKit

Turns out Phil Baroni was being literal about “killing it in Mexico” three months ago pic.twitter.com/guk5Hxf6Ck

Jonathan “War Machine” Koppenhaver, a former mixed martial artist, was found guilty on 29 out of 36 counts related to the attack on Christy Mack, a pornographic film actress, and her partner in August 2014.

He was given a life sentence with a 36-year parole eligibility period. Despite the heinousness of his crime, Baroni continued to publicly back his former teammate. He paid ‘War Machine’ a visit while he was incarcerated, and his popularity helped get him released from Bellator.

Throughout the trial, Baroni also made a point to stand up for the “War Machine.”

Baroni remained supportive of “War Machine” despite listening to the horrifying details of his crime. He supported the disgraced former fighter on Instagram as recently as May 2022, sharing a photo of himself standing behind “War Machine” during his trial with the caption:

I could see something like this coming from Phil Baroni.
I worked with him quite a bit in the past during the MiddleEasy days.
He constantly defended John Koppenhaver aka War Machine, after he nearly killed Christy Mack. Made me sick. pic.twitter.com/BKgDkhyKhF

He really is a piece of shit.

phil baroni has always been an asshole but jesus christ

Phil Baroni was supportive of War Machine during his trial and was supposedly cut from Bellator because of it.

Now reports say Phil’s been arrested for murdering his girlfriend.

Be wary of guys who try to justify domestic violence.

I could see something like this coming from Phil Baroni.
I worked with him quite a bit in the past during the MiddleEasy days.
He constantly defended John Koppenhaver aka War Machine, after he nearly killed Christy Mack. Made me sick. pic.twitter.com/BKgDkhyKhF