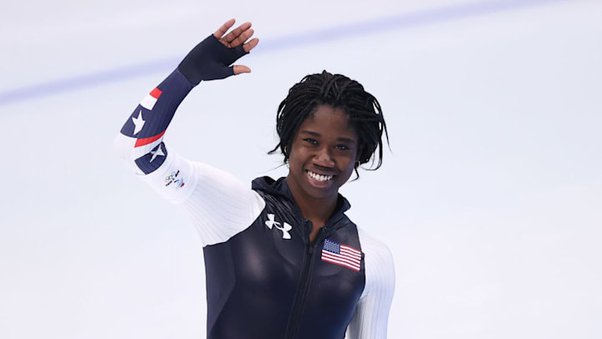 Erin Jackson made Olympic history by becoming the first black female speed skater to win a gold medal. Erin Jackson’s story demonstrates to the rest of the world that black people can also stand on a snowfield!

Simultaneously, we hope that more African nations will be able to join the Winter Olympics family!

The Beijing Winter Olympics have gotten a lot of interest from across the world. The Winter Olympics featured athletes from Kenya, Nigeria, Madagascar, Morocco, Eritrea, and other nations.

Because of the natural climate, politics, and economy, only 15 African countries, including numerous tropical ones, have competed in the Winter Olympics thus far.

Due to a lack of state financial assistance, most African athletes must fight for themselves, relying on sponsorship and crowdsourcing to supplement their training.

Despite the fact that African athletes have never won a Winter Olympic medal, I am confident that one person will rise to the occasion and make history.

Jackson won the gold medal in the Women’s 500m speed skating event at the 2022 Beijing Winter Olympics on February 13th. She is the first Black female speed skater to win a medal at the Olympics.

Erin Jackson was born to Tracy and Rita Jackson in Ocala, Florida. Her brother is her only sibling. Jackson began skating at the age of eight when she attempted figure skating. Shores Christian Academy, Howard Middle School, and Forest High School were all places where Jackson went to school. She moved on to the University of Florida, where she earned a bachelor’s degree in Materials Science and Engineering with honors.

Erin Jackson began her move to ice speed skating in 2016. With barely four months of ice speedskating experience, she qualified for the 2018 Winter Olympics. Jackson, who was coached by Renee Hildebrand, qualified for the 500 meters race and placed 24th out of 31 competitors in Pyeongchang.

After sliding at the U.S. Trials in this event, she was on the verge of missing out on qualifying for the Olympics.

Get the latest news on Medico topics and its Twitter Page.