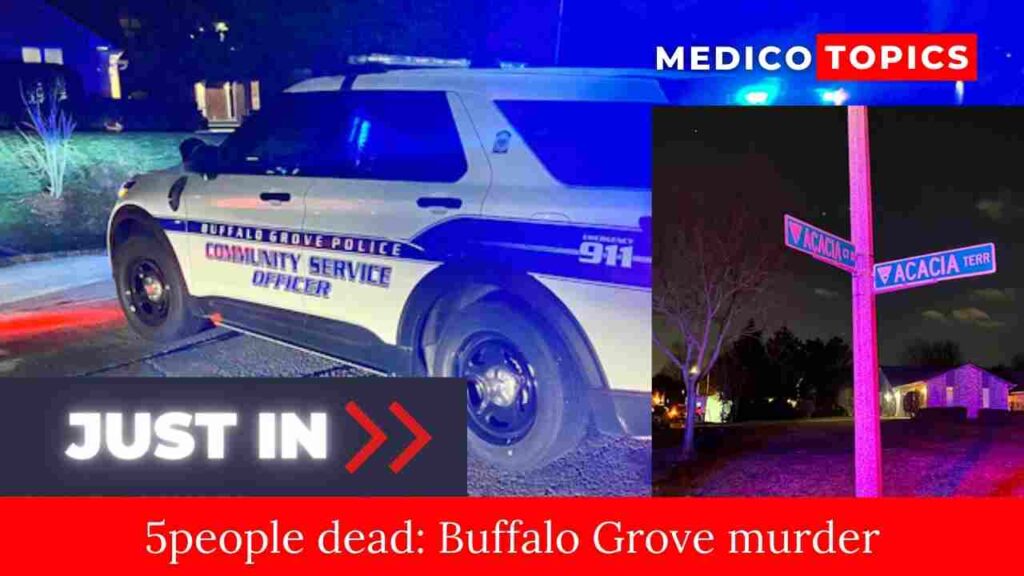 Police in Illinois is investigating after five individuals, including two children, were discovered dead in a house in Buffalo Grove. Let’s see about the Buffalo Grove Murder in detail.

Police has been investigating possibly a murder-suicide, at a residence in Buffalo Grove. Police were called to a residence in the suburban community, which is only a little more than 30 miles north of Chicago, at around 11.10 am to check on a woman’s welfare.

News Release | Buffalo Grove Police investigating incident on Acacia Terrace
At 11:12 a.m., Buffalo Grove police were dispatched to a single-family residence in the 2800 block of Acacia Terrace following a call for a wellbeing check on an adult female. (1/3) pic.twitter.com/vELqA8HCLf

A neighbor said that a husband, wife, and two “elementary-aged children,” a boy and a girl, lived in a house in the 2800 block of Acacia Terrace. In the house, the police were “unable to make contact” with anyone. The village of Buffalo Grove tweeted on Wednesday that a sweep of the house and forced entry were both considered necessary.

What happened to five individuals?

Five individuals, including two children, were discovered dead at a residence in Buffalo Grove on Wednesday. Police are still looking into the case.

Many of the neighbours remarked they had never seen anything like this. The identities of those discovered dead in the peaceful subdivision have not yet been made public by the authorities.

Falguni Patel, a resident of Buffalo Grove, said, “My kids have grown up here for 18 years, so it’s.. you never see it, never seen anything like this ever.”

According to the police, officers responded to a complaint for a woman’s well-being check. The police reached at a two-story house in the 2800-block of Acadia Terrace at around 11 a.m. on Wednesday. Police said they forced entrance after no one answered the door and discovered five bodies inside.

It’s shocking, remarked local Michelle. “Good area, quiet area. Everyone kind of keeps to themselves, but everyone still knows each other, so it’s just sad. ”

According to Michelle, a neighbor, the family has lived there for nearly four years. Michelle stated, “We would watch the children playing around. They would host gatherings of friends and relatives. Nothing too out of the ordinary so it’s a big shock to have all this occurring, especially during this time of the year.”

Michelle claimed that she had observed police activities at the residence during the previous few months. “It’s never something you want to delve into, but things like that you notice,” Michelle stated “. The Lake County Major Crime Task Force is looking into the incident, the village said.

Who are the victims of Buffalo Grove murder?

The village of Buffalo Grove did not reveal the victims’ identities. The Lake County Coroner announced that the victims’ ages, genders, and extent of injuries would be made public following Thursday’s autopsies.

The village tweeted on Wednesday night, “More information will be released as it becomes available.” The Lake County Major Crime Task Force is assisting, officials added in a subsequent tweet, and the victims’ identities are being withheld at this time.

Police do not believe there is a “danger to the public,” according to another tweet. Long after sunset, a police tent could be seen outside the house.

Officers kept the street closed to pedestrians. According to the Arlington Cardinal, “Even a USPS mail vehicle with a post office worker was not allowed to deliver the mail in that portion of the block.”

For several hours, the street was closed while police and detectives looked into it. A murder-suicide claimed the lives of Buffalo Grove resident Andrei Kisliak, his wife Vera, and their children.

Andrei Kisliak family murder: A Buffalo Grove, Illinois, man, and his family were killed in an apparent murder-suicide. According to police, Andrei Kisliak, his wife Vera Kisliak, their two children, and a third person were killed in a murder-suicide shooting inside their house in Chicago’s northwest suburbs. At the scene of the tragedy, the five members of the family were declared deceased.

Andrei Kisliak Obituary and Funeral arrangements will be released by the family.

How did Tea Wright-Finger die? TikToker Cause of death Explained

Who is the suspect in London Bus sexual assault in Lewisham? Explained