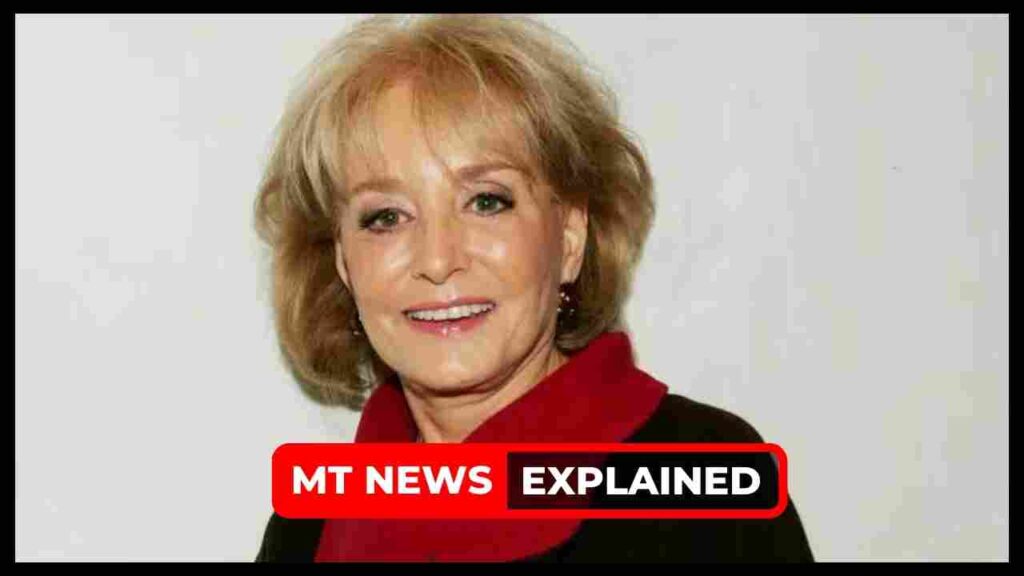 Walters was a pioneer in broadcasting who contributed to the creation of many contemporary TV models. Here are some of her illustrious career’s most notable moments. Let’s see Barbara Walters’s top 10 most interesting interviews that shook the world in detail.

Barbara Walters, a renowned journalist and television broadcaster, passed away at the age of 93. By shattering the glass ceiling, Walters encouraged many generations of women to work in journalism. We’re remembering five of her most memorable early interviews with celebrities like Dolly Parton, Lucille Ball, and Johnny Carson as an homage to her legacy.

BREAKING: Barbara Walters, who shattered the glass ceiling and became a dominant force in an industry once dominated by men, has died. She was 93. https://t.co/tydwREgTb2 pic.twitter.com/b4jOEHVYFE

The late TV icon had interviews with everyone, including Monica Lewinsky and Fidel Castro. Let’s check out Barbara Walters’ 10 Most Impactful Interviews that left everyone speechless.

The late pioneering journalist Barbara Walters co-founded The View and launched ABC’s 20/20. She interviewed royalty, celebrities, presidents, and Hollywood stars during her illustrious career, which lasted 50 years and garnered 12 Emmy awards. She passed away in New York on Friday at the age of 93. Jacqueline is her only surviving child.

Walters, a broadcasting mainstay notorious for causing guests to cry, attributed her ability to make friends and ask questions to the fact that she switched high schools three times. Because they worked for my father, celebrities never made me feel awed, according to Walters. “I had a question. Even now, if I ask someone a question while we are having dinner and they are sitting next to me, they will respond, “Oh, you’re interviewing me.

According to Walters, the icon frequently made her guests cry by inquiring about their childhoods “because that’s revealing, and they’d remember a parent or someone who’d passed.” “That was back when no star leaving rehab cried. Don’t you dare cry, I say now.

Scroll down to see the notable interviews with Fidel Castro, Vladimir Putin, and Monica Lewinsky.

The former White House intern’s interview with Walters “attracted an average of 48.5 million viewers, and an estimated 70 million people watched all or part of the two-hour broadcast, in about 33.2 million households,” according to a 1999 New York Times article.

Lewinsky, the intern embroiled in the sex scandal that nearly ended Bill Clinton’s marriage and presidency, answered Walters’ probing questions about her weight problems and history of sleeping with married men.

You showed the president your thong panties, Walters asked Lewinsky bluntly. What gave you the nerve? Who does that, I ask? She spoke. Where was the 25-year-self-respect old’s and self-esteem, she further questioned?

Walters recalled her interview with Robin Givens and her then-husband, Mike Tyson, to ABC News, saying, “Everywhere I went the next day, people asked me about it.” Additionally, Walters stated that she would want someone who had never seen her work before to watch this interview.

She didn’t hesitate to ask Givens if Tyson had ever hit her or other highly private questions. Givens’ reply: “He trembles. He swings and pushes. I occasionally believe he’s attempting to frighten me. There were instances when it occurred that I believed I could handle afterward, you know. It was a sobering realization for the audience that “And just recently I’ve gotten terrified, I mean really, very, greatly afraid.”

In 1996, after the murders of Nicole Brown Simpson and Ron Goldman dominated the news for months, Walters was able to sit down with Robert Kardashian to talk about the case.

Due to the blood evidence, Kardashian reportedly admitted during the interview that he had “doubts” about his friend and former client.

Castro’s first interview was with American journalist Walters. Together, they traveled through Cuba for ten days by boat in the Bay of Pigs. She sat in the passenger seat next to him on long vehicle trips, holding his revolver. Walters interrogated the dictator in the same way she would a famous Hollywood actor, notwithstanding his position. In the interview, Castro asserted that there are no protests in Cuba and questioned the need to stop something that never occurs.

Walters responded, “But you stop it from happening! Perhaps there will be a protest! The five hours the trailblazing spent with the despot led to threats against her life.

“He was delightful and very cautious about his private life,” Walters remarked after his passing. He described our conversations as “fiery discussions.” He made it abundantly obvious to me during our interactions that he was an absolute autocrat and a fervent opponent of democracy. I explained to him that our fundamental difference was how to define freedom.

The first American journalist to speak with the president of Russia was Vladimir Putin. Putin directly responded to her question by denying ever having given the order to kill someone.

Regarding the 9/11 attack, he said to Barbara Walters on 20/20, “I don’t know whether it would have been possible to prevent these strikes on the United States by the terrorists, but it was a shame that our special services didn’t get information on time and warn the American people and the American political leadership about the tragedy that came to pass.”

After Reeve’s horseback riding accident in 1995, which left him crippled, Walters spoke with him several times. He picked Walters for his first interview, and during a memorable sit-down, he said that he had briefly wished he had passed away.

The Superman actor shattered his upper cervical vertebra so severely after being thrown from a horse that doctors didn’t believe he would survive, much less regain any mobility or the ability to breathe on his own.

“Maybe it’s not worth everybody’s bothered,” Reeves said to Walters, “and you had that notion for maybe 10 minutes, you know, before the surgery, when I initially was first coming out of, you know, consciousness.”

That you desired to “pull the plug,” die, or whatever?” Walters enquired of Reeve. “Yeah, I suggested, maybe I should just check out,” Reeve said. “And Dana, my wonderful, wonderful, wife, said, ‘You’re still you, and I love you.’”

Walters urged the media mogul to speak about her friendship with Gayle King and allegations of their connection during a rare interview with Oprah. Winfrey stated she “doesn’t know a greater person” than her dearest friend before breaking down in tears.

I’m not a lesbian, she said, addressing her sexuality. I wouldn’t even call myself a lesbian. And the reason it annoys me is that it implies that someone must believe I’m lying. That comes in first. Second, why would you want to conceal it? I don’t live my life that way.

Hugo Chávez, the president of Venezuela, was in the news nationwide when Barbara Walters spoke with him about his infamous remark that he was “the devil” in a speech at the United Nations.

He said, “Yes, I call him a devil in the United Nations — That’s true,” when Walters inquired about the name-calling in the course of their customary interview. Because I believe he is uneducated, I once said that he was a donkey.

What type of tree are you? was one of Walters’ funniest and most bizarre queries during this conversation. She received a lot of jeers for asking the question, but during the interview, Hepburn said that she saw herself as a tree, so it made sense. Later, Walters acknowledged that it was among her biggest interviewing errors.

DeGeneres conducted an open conversation with Walters in which she discussed everything from her movie career to her choice to come out. She also talked about how her stepfather had molested her and how she had escaped one night by breaking a window.

South Milwaukee murder: What happened to the teens? Found fatally shot inside a car

How did Bob Nalbandian die? Inside Metal Director’s cause of death Explained