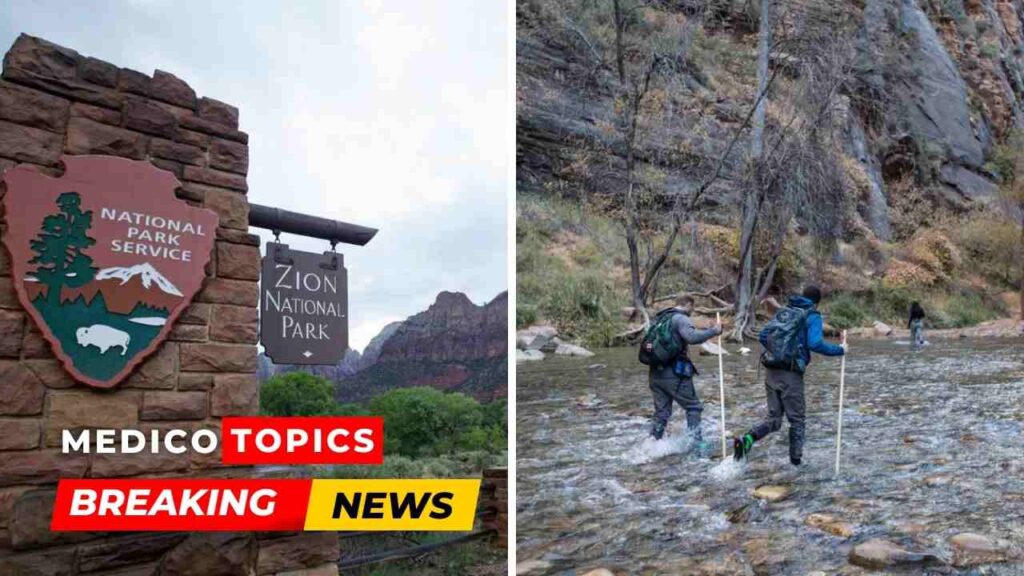 Authorities have confirmed that a woman who was out on a hike in Zion National Park froze to death after her husband left on his own to get assistance. Her husband was later hospitalized.

The 33-year-old husband and 31-year-old wife had started their journey on Tuesday and spent the night camped in the Utah nature reserve. The male was hurt, but as night fell, the temperature dropped and the woman began to exhibit symptoms of hypothermia.

On Wednesday morning, they decided to pause and separate so that the husband could receive assistance for both of them while they were still trekking a 16-mile path across the Narrows.

The wife remained at their halting point, about a mile and a half from the north end of Riverside Walk, a paved trail that connects the Temple of Sinawava to the Narrows.

Eventually, the spouse encountered park authorities on the path and informed them of the situation; they transported him to a medical facility.

The married pair was on a legal, 16-mile (25-kilometer) trip through the Narrows section of the park, according to a statement released on Thursday by the National Park Service. On Tuesday, the pair set out on their journey through the Narrows.

The pair came to a stop approximately 2.4 kilometres (1.5 miles) from the northern end of the paved Riverside Walk trail. According to the park service, the man reported to rescuers that they were “dangerously cold” overnight and showed signs of hypothermia.

The man asked for assistance early on Wednesday while the wife stayed in place. Before the rescue crew came, other tourists performed CPR on the woman. But it was too late; she had passed away by the time her husband and the rescuers returned, according to the park administration.

The reason for the woman’s death is being looked into by the park service, the Utah Office of the Medical Examiner, and the Washington County Sheriff’s Office. The couple’s identity have not been made public by the authorities.

Similar incident took place in 2020, where Meg Johnson was injured while hiking in Zion National Park. It left her paraplegic from the chest down. She first experienced a great deal of trauma as she dealt with her accident. She focused her energies, though, on supporting those with disabilities.

Where is Zion National park?

American national park Zion National Park is situated close to the town of Springdale in southwest Utah.
The park, which is situated at the meeting point of the Colorado Plateau, Great Basin, and Mojave Desert regions. It has a distinctive topography and a range of life zones that support an uncommon diversity of plants and animals.

The Kolob Canyons component of the park, which is located in the north, is reachable from Interstate 15, exit 40. A BSk (Köppen climatic classification) cold semi-arid climate. It has very hot summers and mild winters and little annual precipitation is present in Zion National Park.

How did John Fallon die? Talented Hull boxer cause of death Explained