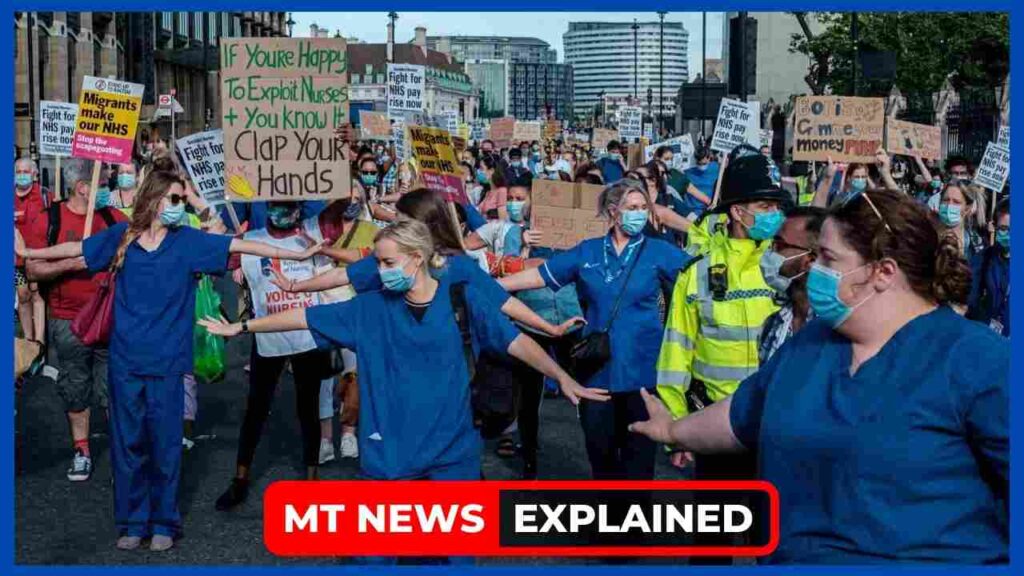 In the two days leading up to Christmas, nurses in the UK will go on strike for the first time. Let’s examine the specific reasons why NHS nurses called a strike before Christmas.

Before Christmas, NHS nurses will participate in their largest-ever strike to get paid more. The Royal College of Nursing (RCN), the nurses’ union, held a vote on industrial action for its 300,000 members between October 6 and November 2, the first time in its 106-year existence that it had done so for members in all four UK nations.

When and where will strikes occur?

At least 177 NHS trusts will see strikes. The Royal Infirmary in Edinburgh, Guy’s and St. Thomas’ and King’s College Hospital in London, the University Hospital of Wales in Cardiff, and Royal Victoria Hospital in Belfast are a few examples of these.

A complete list of hospitals and NHS trusts taking part in the strike can be seen here. On November 25, the RCN declared that the first nationwide strikes would occur on December 15 and 20, 2022. Senior sources told The Guardian that the strike is anticipated to continue for 12 hours on both days, most likely from 8 am to 8 pm. Strikes might continue up until May 2023. Soon, more specific plans will be revealed.

How is the decision to strike made by a trust?

The union must meet two requirements in an NHS trust to be eligible for legal strike action in England, Scotland, and Wales: it needs 50% of eligible union members to vote in the ballot, and the majority must then endorse industrial action.

The British Medical Journal reports that 102 out of 215 NHS trusts in England fell barely short of the required 50% turnout rate.
In Scotland and Northern Ireland, every NHS group will strike, and all health boards in Wales—all but one—met the requirement.

'I have enormous respect and gratitude towards our nurses.'

As NHS nurses are set to strike in a dispute over pay, Prime Minister Rishi Sunak says a 19 percent pay rise is 'obviously unaffordable.'

Why are nurses walking out?

Pay is the biggest difficulty. Nurses are among a large group of public sector employees whose pay has not kept pace with inflation.

Demand for pay is unaffordable

The health secretary commended nurses for their commitment and hard work while expressing his sincere sadness that some will be participating in industrial action.

“These are difficult times for everyone, and the economic realities mean that the RCN’s proposals, which on current statistics are a 19.2% pay rise, costing £10bn a year, are not feasible,” said Steve Barclay. The RCN is requesting a raise based on the October RPI inflation rate + of 5%. This rate was 14.2%.

In Scotland, a flat rate of just over £2,200 was offered, while in Northern Ireland, no pay award may be authorized without an Executive in place. NHS employees in England and Wales have received an average raise of 4.75% this year.

Jeremy Hunt, the chancellor, and former health secretary expressed a “great deal of sympathy” for nurses who are trying to make ends meet but insisted that lowering inflation is the best way to assist them.

According to data from the London School of Economics, during the past ten years, experienced nurses’ pay has decreased by 20% in real terms. This implies that nurses are essentially working for free one day a week. That is consistent with previous analysis from the health charity Nuffield Trust, which found that the real pay for NHS employees will be lower in 2022–2023 than it was in 2010–2011.

The sad reality for NHS nurses👇🏻

“We don’t want to strike but we’ve been waiting for jam tomorrow for decades and it hasn’t come.

“All nurses need to be able to lead reasonable lives without needing to strike. Pay us what we deserve.”#FairPayforNursing pic.twitter.com/rSBgHcB0Fg

There must be a change

Nursing remuneration has lagged over the past ten years, according to RCN head Patricia Marquis, who told Sky News that nurses were taking action by reminding governments that “something needs to change.”

Our members are telling the government loud and clear that the NHS has to change for nurses, she said. “We received a pay award of £1,400 this year, which may seem like a lot to some people, but nursing pay has fallen behind over the last ten years by about the rate of inflation plus 5%; as a result, our members are extremely disappointed that they did not receive anywhere close to what they required to bring their salaries back to the level they were ten years ago.

“They are most concerned about the effect it is having on patient care. To provide the care that is required, not enough nurses and nursing personnel are available.

So, because patients are waiting too long for their procedures, ambulances, and beds, it is just unsafe for patients to wait any longer, and nurses are saying “we’ve had enough, we can’t go on like this, something has to happen.”

'There's no amount of money that would ever be realistic for a nurse.'

Between April and June, there were a record 47,000 nursing openings in England, up a fifth from the previous year. According to the RCN, 25,000 nurses in the UK have dropped off the Nursing and Midwifery Council register in the previous 12 months.

The cross-party Health and Social Care Committee members this summer referred to the staffing challenges as “the largest workforce crisis” in NHS history.

The union attributes the problem to more than just low wages. There are other health unions threatening strikes in addition to the RCN. The voting period for Unison members ends on Friday, and for NHS members of Unite, it ends the following week. Junior doctors will be asked to vote on taking action in the new year, along with midwives, physiotherapists, and others. Scotland’s ambulance workers are scheduled to strike on Monday.

What effects has the crisis in the cost of living had on nurses?

The rising cost of living has had a significant impact on those with low-paying occupations. One in five people who are referred to food banks come from working homes, according to recent statistics from the food bank charity the Trussell Trust.

Those who have been compelled to use food banks and receive charity food boxes include nurses. To aid their personnel, some NHS trusts have established food banks or food voucher programs.

In a 2017 NHS Providers poll of NHS trust executives, 71% of participants said that many of their employees struggled to pay for travel expenses to work, while 81% expressed moderate to significant concern for their physical well-being and 61% noted an increase in staff sick days owing to mental illness.

Two-thirds (63%) of nurses and healthcare workers choose between food and fuel, while 14% use food banks, according to a September research of 1,020 NHS and social care staff by the healthcare technology platform Florence. Additionally, 28% of workers intend to leave the sector in search of higher compensation.

How will the strikes affect the care provided by the NHS?

Patient safety, according to the RCN, is “paramount,” and during strikes, minimum staffing levels will be maintained by adhering to the “life-preserving care approach.”

According to this, worker strikes are prohibited in specific care settings to avert serious injuries or fatalities. These consist of urgent treatment services, urgent diagnostics, and urgent emergency services.

There will be changes elsewhere in the delivery of NHS treatment, though. Sessions of chemotherapy and kidney dialysis are anticipated to be rescheduled, as well as non-urgent surgeries and outpatient appointments. Hospital care is anticipated to be comparable to that provided on the weekend or a holiday.

Could agency workers take the place of nurses on strike?

The RCN’s instruction is unequivocal: “We at the RCN expect that you do not cover that shift if you are an agency worker assigned to work at an NHS organization on a day of strike action.

“You could request that your agency locate alternate employment for you at a company that is not participating in a strike, such as a private hospital or care facility.”

However, this does not imply that agency employees must heed the counsel; in fact, some shifts may pay well. One in three NHS trusts paid an agency more than £1,000 for a single shift last year, and one in six trusts paid more than $2,000. This was revealed by a recent freedom of information request by Labour.

How did Hans Magnus Enzensberger die? German writer cause of death explained