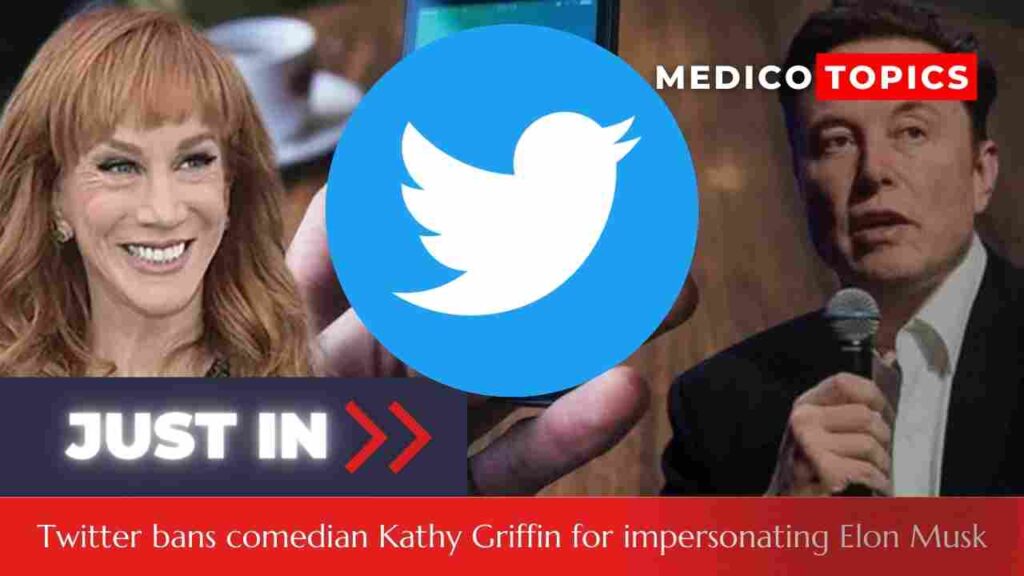 The comedian Kathy Griffin, 62, was banned from Twitter on Sunday after changing her screen name to that of the billionaire, violating the terms of service on impersonating others. She has increased her criticism of Musk since he took over the platform in October.

Griffin had changed her identity to “Elon Musk” and tweeted, “After much spirited discussion with the females in my life, I’ve decided that voting blue for their choice is only right. (They’re also sexy females, btw.) #VoteBlueToProtectWomen.”

Benny Johnson’s tweet was shared by Elon Musk. “BREAKING: @kathygriffin has been permanently suspended from Twitter for impersonating.”

“Actually, she was suspended for impersonating a comedian”, he said.

Actually, she was suspended for impersonating a comedian

Elon Musk stated via a series of tweets on Sunday that any Twitter handle discovered engaging in “impersonation” without explicitly stating “parody” will be permanently suspended.

“Going forward, any Twitter handles engaging in impersonation without clearly specifying “parody” will be permanently suspended,” Musk wrote in a tweet.

Previously, we issued a warning before suspension, but now that we are rolling out widespread verification, there will be no warning.

This will be clearly identified as a condition for signing up to Twitter Blue.

The new CEO of Twitter also added that unlike in the past, no notice will be offered once mass verification is implemented. “Previously, we issued a warning before the suspension, but now that we are rolling out widespread verification, there will be no warning. This will be clearly identified as a condition for signing up to Twitter Blue,”  he tweeted.

Kathy Griffin began using her deceased mother, Maggie Griffin’s account, who passed away in 2020, after her account was suspended. When Kathy Griffin’s mother was alive, she was in charge of the account, which had been dormant since 2019.

The Suddenly Susan star wrote “#FreeKathy,” a hashtag she appended to other tweets and one that was shared by a slew of supporters, including Star Wars actor Mark Hamill, when she resumed using her mother’s account.

But even though the hashtag “#FreeKathy” rose in popularity and appeared to have widespread support for the TV personality’s account to be reopened, she still came under fire from some people for exploiting her mother’s account.

Musk and Kathy fought over tweets

Musk added his stale old joke, “Actually she was suspended for impersonating a comedian,” to the conversation.

Griffin responded from the account of Maggie Griffin, “I mean… you stole that joke, you asshole.”

But if she really wants her account back, she can have it

“People have been posting that joke for hours, you hack. Look, please do a better job running this company. It used to mean something. This is KG btw.”

Musk replied that Griffin would have to pay the $8 monthly fee if she wanted her account restored.

In a letter to journalist Kara Swisher, one of the star’s admirers, Kathy Griffin additionally revealed that she was the one using the account “tweeting from my dead mother’s account. She would not mind.”

She replied to a since-deleted tweet with what looked to be an explanation for why her account had been suspended: “I honestly think it’s because it’s me, and because the tweets I was trying to write in his voice were pro democrats and had hashtags like #VoteBlueToProtectWomen and #voteblueand pro @BetoORourke, etc.”

Musk reportedly verified the rumors on Tuesday and disclosed that the company would charge USD 8 per month for a subscription service on Twitter that would grant users priority in replies, mentions, and searches.

“Twitter’s current lords and peasants system for who has or doesn’t have a blue checkmark is bullshit. Power to the people! Blue for USD 8/month,” he tweeted.

Musk’s choice to enact the blue tick tax, however, did not sit well with everyone. Even some advertisers retracted their advertisements from the website. The Twitter Blue membership became publicly available over a year ago as a way to read articles from some publishers without ads and make other changes to the app, such as changing the color of the app’s icon on the home screen.

Gigi made it known that she had quit Twitter. After numerous layoffs here, he has made this decision. Additionally, Gigi has offered her opinion on Musk.

He claimed that since the new leadership took over, Twitter has turned into a breeding ground for animosity. I won’t take part in any such activity.

Many Twitter users have recently changed their page names to reflect his and posted remarks intended to criticize his libertarian viewpoint and leadership of the social media site, which he now owns after orchestrating a $44 billion acquisition.

Musk has received harsh criticism for his poor start as Twitter’s CEO after criticizing the platform’s content moderation and promising a new era of free speech.

Some people feared that former President Donald Trump might be permitted to re-enter after being barred for allegedly instigating his supporters’ violent invasion of the US Capitol on January 6, 2021.

Elon Musk response to criticisms for charging $8 for bluetick verification and suspension of some accounts in twitter.

“To all complainers, please continue complaining, but it will cost $8”

“Being attacked by both right & left simultaneously is a good sign”

“… with a lot of room for improvement”

“Twitter has had a massive drop in revenue, due to activist groups pressuring advertisers, even though nothing has changed with content moderation and we did everything we could to appease the activists. Extremely messed up! They’re trying to destroy free speech in America.”

Some People came in support of Musk’s $8 for bluetick and tweeted as support. Elon musk retweeted some of the tweets.

As a result of mass layoffs, the corporation is facing criticism. According to The New York Times, roughly half of the workforce was fired. The action was taken in an effort to stop the corporation from losing $4 million every day.

Many employees said they were not informed of their job termination, which indicates that the layoffs were improperly handled. Many former employees are apparently being asked to return by the company.

An email was sent to Twitter on Sunday asking for comments on the verified accounts problem and Griffin’s ban received no response.

Later, Musk tweeted, “Twitter needs to become by far the most accurate source of information about the world. That’s our mission.”

Disinformation on the site during Tuesday’s midterm elections may increase if the corporation decided to remove blue checks from current verified users, which hasn’t happened.

As a result, internet users turned to social media, but they had conflicting views.

Many celebrities tweeted in Kathy’s support, and some spoke up for the My Life on the D-List actress, using the hashtag #FreeKathy. Many users were relieved that Kathy had been suspended.

“So let me see if I understand this correctly. Trump inciting violence is okay, and he should be allowed back on the platform, but Kathy Griffin impersonating Elon Musk is crossing the line?”

“Apparently the only person who didn’t know Kathy Griffin’s impersonation of Elon Musk was a parody was Elon Musk?”

“I’ll probably get banned for this, because free speech ends right at @elonmusk doorstep. He is now waging war on public figures who are trying to show him how easy it is to imitate a current public figures. So he permanently bans Kathy Griffin, then insults her. Yet, score of…1”

Some tweeted against Kathy,

“Awww,hurts when it happens to your side doesn’t it? LOL The fact is, Kathy Griffin posted a picture of her holding President Trump’s severed head!She also threatened violence after the election if the the Dems lose the congress.People on the right were banned for much much less”

How did Pang Chin Hin die? Mamee Monster Founder cause of death

How did Lois curtis die? Artist And Disability Advocate cause of death Explained