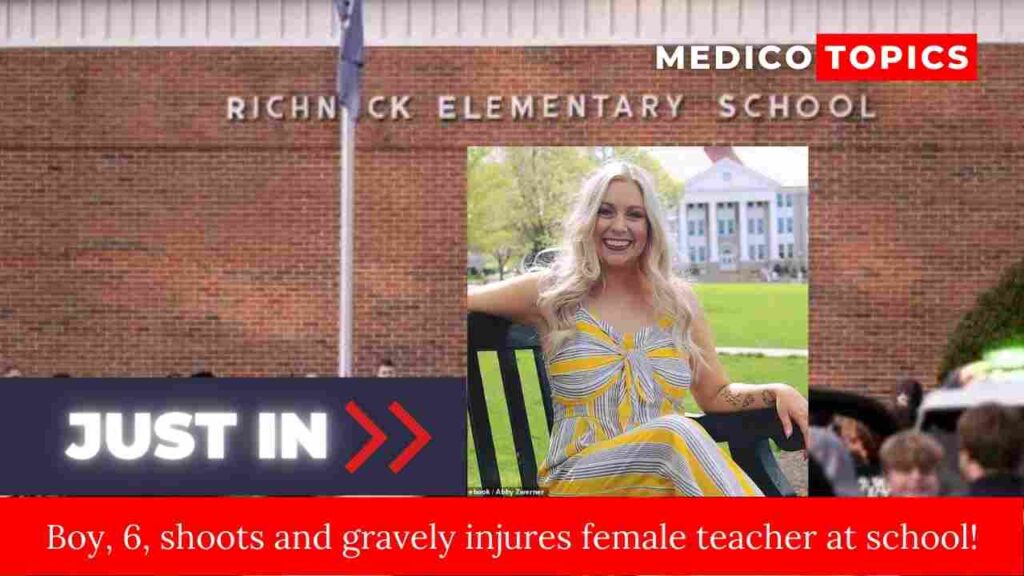 Authorities have stated that Abby Zwerner, 25, was shot by a six-year-old on Friday at a school in Virginia and that the incident was not an accident. Let’s see who Abby Zwerner is and about the incident in detail.

Who is Abby Zwerner?

Abby, a resident of Williamsburg, is in critical condition, after being shot by a pupil at around 2:00 pm in a first-grade classroom in Newport News, Virginia, according to police.

After that, she was taken to the hospital for an operation. Zwerner was listed in critical condition earlier this evening, according to officials; since then, no new information has been given.

Zwerner was involved in an “altercation” with the boy, who has not been publicly identified, before she was shot, according to police.

This is Abby Zwerner, 25-years-old from Williamsburg, Virginia, the first grade teacher shot by a 6-year-old student in her classroom. She remains in critical condition. Parent Sebastian Gonzalez-Hernandez says Zwerner “screamed at her kids to run away” after the student shot her pic.twitter.com/FmwuithDNw

Sebastian Gonzalez-Hernandez, a parent at the school, is said to have verified her identification.

According to him, the courageous teacher even called at the other students in the class to run before she was struck by a single bullet.

“Even after she’d been shot she was thinking about the safety of her children.”

“She is an amazing teacher, so dedicated. My son absolutely loves her, and we’re devastated about what’s happened.”

“We are all thinking of her and hoping that she gets better soon.”

Police cars were seen racing to Richneck Elementary School in a video taken at the school while cutting through traffic. The teacher was described as being in serious condition by the police, but by late afternoon, things had started to get better.

The six-year-old was in custody, according to Police Chief Steve Drew, although it was not yet known what charges he would be facing. He also affirmed that Abby and the student had a confrontation before the shooting.

Drew claimed that the first-grade classroom was the only place where shots were fired. Investigators are still trying to figure out how the kid got his hands on a gun.

After the shooting, Drew reported that all of the kids had been relocated to the gym and were safe.

A lockdown was instituted at Richneck Elementary however the active shooter alert was later cancelled.

“We did not have a situation where someone was going around the school shooting.”

The shooting didn’t cause any harm to any students. 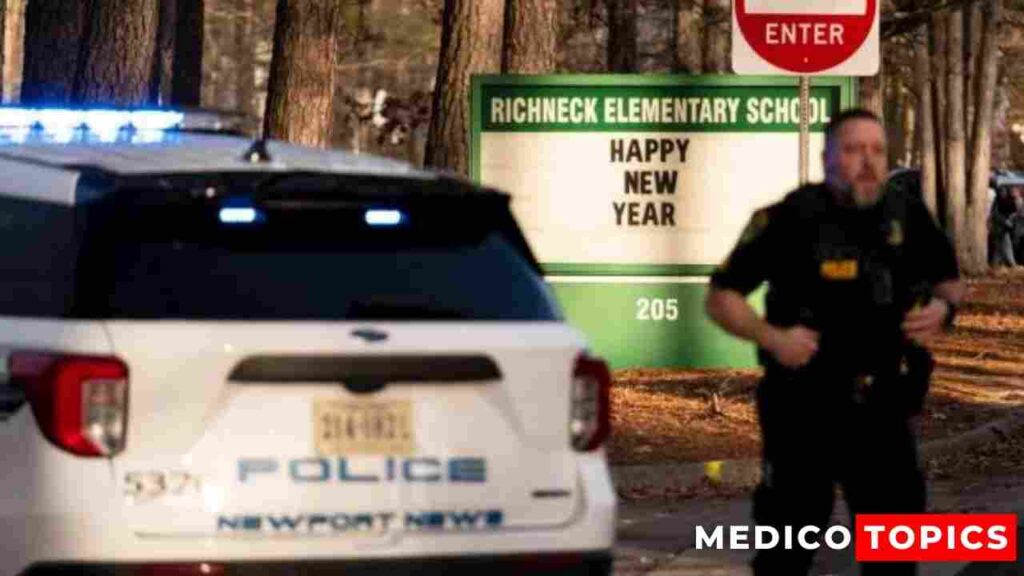 Police rushed to the scene at Richneck Elementary School on Friday (Picture: Reuters)

According to the website of the Virginia Department of Education, the school has about 550 students in kindergarten through fifth grade.

The police started the process of reuniting parents and children right away.

“The number one priority for me is to check on our victim at the hospital and get all these students back with their families.”

On Monday, there won’t be any classes at the school.

A student’s grandmother claimed that a student at the school had brought bullets to class and had discussed bringing a gun next, though she wasn’t positive it was the same boy.

George Parker, the superintendent, stated that although the test is not usually conducted, the school is capable of using metal detectors on students.

‘When we have a perceived threat or issue, we do random metal detection on those days,’

‘Today, our students got a lesson in gun violence,’ Parker said. ‘We need to keep the guns out of the hands of our young people.’

A British parent of one of the students, told WTKR:

“Guns, that’s the biggest problem in this country.

‘I’m only here because my husband is in the military. Otherwise, I would not have chosen to come to this country.”

Apparently, the school texted the parent of a fourth-grade student to let her know that the shooting had taken place and that the suspect had been taken into custody.

Charges against the 6 year-old-boy

The president of West Coast Trial Lawyers and a former federal prosecutor, Neama Rahmani, provided insight into the child’s potential future as the inquiry goes on.

“The six-year-old won’t be prosecuted for this shooting and I doubt the child will be detained for any significant length of time,”

“Virginia law presumes that a six-year-old can’t be criminally liable and can’t even be held liable in civil court for negligence.”

He added that authorities will probably look into how the kid obtained the firearm and was able to take it to school. The former prosecutor predicted that the parents would be the first people the authorities would investigate.

“Virginia makes it a misdemeanor crime to allow a child to access a firearm. But it’s only a misdemeanor, so even if that results in a conviction of the parents or anyone else, the consequences would be minimal.”

“And that’s pretty much the extent of what consequences any adult might face for this shooting.”

Rahmani referenced the prosecution of Jennifer and James Crumbley, whose 15-year-old son Ethan is accused of killing four pupils at Oxford High School in Michigan on November 30, 2021. The Crumbleys were charged.

“That prosecution was aided by the fact that they gave their teenage son a firearm as a gift. I doubt those same circumstances apply with this six-year-old, so that makes it harder to charge any adult in this shooting.”

The most recent event, according to the Uvalde Foundation For Kids, was evident that more has to be done to secure America’s schools after the May 2022 shooting at Robb Elementary School in Uvalde, Texas.

It said in a statement:

“Today’s incident highlights, yet again, the need to prioritize in this nation, the protection of our schools, our students and the communities who care for them.”

“Yet again, in another school in this nation; students are facing fear – instead of joy; lessons in violence – instead of peace. UNTIL those lessons change, our work continues.”