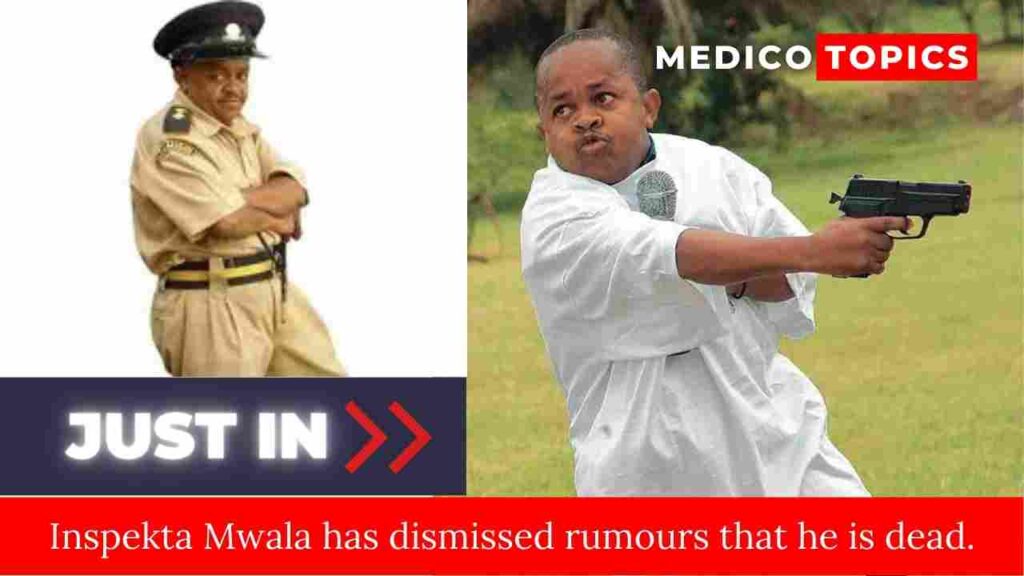 The alleged demise of the actor was revealed in a now-famous TikTok video, which was shared by user @Vonkali23 on January 5, 2023, and has now had over 214,000 app views.

The seasoned actor denied the rumors and asked his admirers to disregard them on his Twitter page, reassuring them that he was very much alive.

The actor was seen in several scenes on the television program Inspekta Mwala in the video clips that were featured.

More information indicates that the actor was upset with the TikToker for “ruining his reputation while he is still alive.”

Additionally, he said that he had forwarded the case to the Directorate of Criminal Investigations (DCI) for additional investigation.

“Mwala is still alive, whoever made the clip should watch out because I have reported to the DCI, and it will not be pretty when we catch up with them.”

“It’s not the first time this is happening, these people kill me on social media every year. This time it was TikTok, last year it was Facebook, another time Twitter. It needs to stop.”

This is not the first time that Mwala has been “Killed” on social media.

The renowned actor already revealed to the public his actual social media identities.

Recently, a number of identities with names and images have proliferated across social media, causing confusion and leading to impersonators preying on unsuspecting users.

The comedian and the DCI teamed up in 2021 to make services more accessible to the public. Gaining the public’s trust was the goal of the partnership with the crime and justice comedy series, and they even opened a distinct DCI office on the program.

Inspekta Mwala is a well-known comedian and actor. Everyone is familiar with him as the short man who personifies the Kenyan police force. You can never see him perform without cracking up.

Thespian and comedian Inspector Mwala was born and raised in Kenya. He was brought up in Taita Taveta County, where he also went to school before beginning his career as an actor there.

Back when KBC was the sole station broadcast on Kenyan television, he began his career as a part-time actor on the show Vitimbi and Vioja Mahakani, which was at the time popular. He was added to Vitimbi as a fresh face to compete with the other regional shows. Mwala claimed in an interview with Hot 96 that his salary during his first performing month was Ksh 150 per show.

He made a pitiful Ksh 450 in the second month, but due to his perseverance, his work increased over the following months to the point where he was practically required.

After making a name for himself on television, Inspector Mwala was allowed to host his weekly program on Citizen TV called Inspekta Mwala, where he portrays the tough-talking police officer.

His program became popular right away and continues to do so. In actuality, he is among the funniest men Kenya has ever seen. He has been able to host his gig and serve as an MC for several initiatives over the years. He has toured the entire nation hosting events and narrating commercials for businesses like Safaricom and Airtel.

The name Inspector Mwala is well-known to people of all ages and from all walks of life. Many people don’t care to recall his true identity as long as they are familiar with his stage name, Mwala.

Mwala doubles as a radio host on Radio Citizen’s breakfast program, Jambo Kenya, when he isn’t performing on his weekly show. He co-hosts the program, and thanks to his humor, Kenyans have grown to love Royal Media.

When Mwala wants to relax or spend what we refer to as “personal time,” he values the fundamental necessities of daily life, such as getting enough sleep.

Who is Maxine Wahome? Know more about the girl who assaulted Kenyan rally driver Asad Khan

Is Asad Khan dead or alive? What happened to the Kenyan rally driver? Explained