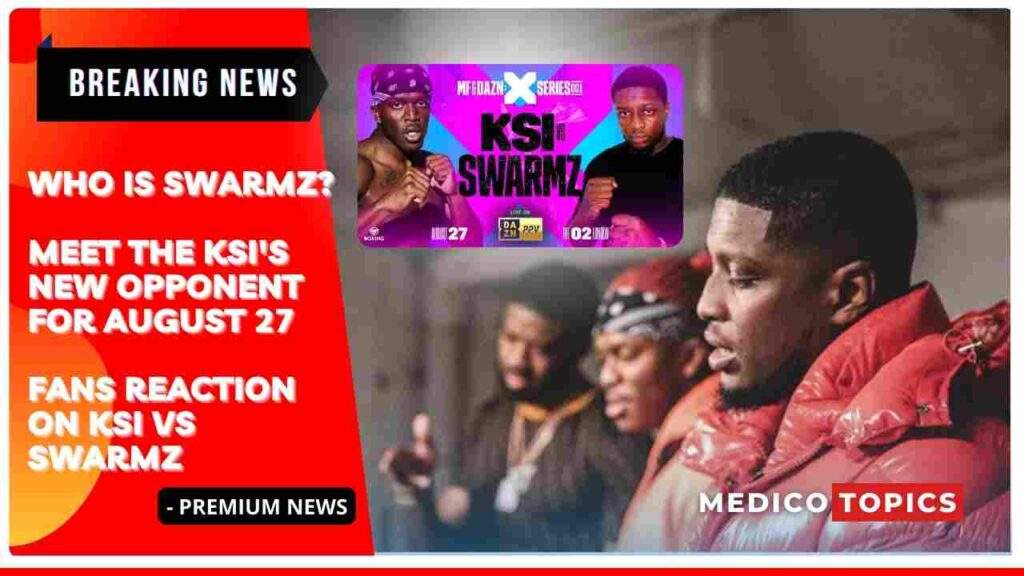 After Alex Wassabi pulled, KSI will meet rapper Swarmz later this month, but the news hasn’t exactly gone down well. Let’s find out more about the rapper Swarmz, his background in boxing, and how the internet is responding to this.

Avenging his brother Deji’s loss to the same opponent, British YouTuber KSI was scheduled to make his ring comeback against fellow social media sensation Wassabi in London on August 27. Wassabi, however, got a concussion during practice and had to withdraw with one month left.

The Problem Child called out KSI in a video message in which he said: “Oh, KSI’s fight, buddy. I heard the news. It sucks for Alex since he can’t fight because of his concussion, but this now puts KSI in a difficult situation. We may all assume that he is afraid if he refuses to combat me now. KSI I’ll travel to London and weigh 180 pounds for the fight; you can be the A-side, what’s your excuse? Do you agree?”

Paul continued by saying that KSI had spoken to his management and had said he would only sign the contract if he could retain all of the profits from the fight and wouldn’t have to give the American a fight purse. Then, when KSI disclosed that he had already chosen his opponent, who is now known to be Swarmz, “The Problem Child” agreed to the terms.

KSI took his Twitter handle and responded with a series of tweets,

So then you could have fought Tommy Fury in England on my undercard? Or is it that you didn’t wanna fight a boxer? So you’re admitting that you’re actually just full of shit this whole time?

You and MVP are so untrustworthy. First Tommy, Rahman, and now Wassabi. Even when you do put events on, all you do is lie to your fans and inflate your numbers by like 50 times. We know your dealings with each promotion & what you actually make. It’s a joke.

The industry knows now that you are not the draw you have portrayed to be. Your stock is down bad and you don’t get to dictate shit to me mate. You think you’re clever but we anticipated you’d pull something like this.

Plus you’ll probably try to pull some shit causing our event to cancel too just as your flop event did. You tried to drain Rahman so that there would be no life left in him when he fought you with the rehydration clause.

You fought a man fresh out of hip surgery. You fought and beat a past his prime Woodley with 3 weeks’ notice. You made Gib fight at a weight that you knew he would struggle to reach with such short notice. The list goes on. All of that ain’t gonna work with me, fam.

We will fight on my terms and when we do, it’ll be done on the biggest stage. I’m talking Wembley stadium fam. With a full camp tailored just for you and I, so that there are no excuses when we fight. None of this short notice shit.

What you didn’t know is that we actually contracted another fighter in case you guys pulled something like this.

I will honor my word to my fans and to my opponent because my word means something unlike yours. The show will go on on August 27th and you or MVP won’t have a thing to do with it. Enjoy your night out buddy @JakePaul

Who is Swarmz & his Boxing records

Longtime opponent Jake Paul offered KSI a fight, but KSI declined and subsequently declared he would face 25-year-old Swarmz, actual name Brandon Scott. Swarmz has never participated in a fight but is familiar with KSI thanks to their same musical interests. The two of them co-starred in Swarmz’s song Houdini.

WE HAVE A NEW MF & DAZN X: SERIES 001 HEADLINER 🚨@KSI will fight @Swarmz__ at the O2 Arena on Aug. 27 after Alex Wassabi withdrew due to a concussion.#KSISwarmz | @misfitsboxing pic.twitter.com/M6gzKx8CxS

Swarmz was a gifted football player when he was younger. He spent time in the Fulham academy before briefly playing in the non-league before giving up the sport to concentrate on his music career. Despite having a million Instagram followers, he hasn’t commented on the fight.

This is Swarmz’s first professional appearance. He has no prior boxing experience.

It looks that Swarmz had already been selected to take Wassabi’s spot should he withdraw. Keemstar, the host of the well-known internet news program Drama Alert, said that KSI’s promotional business, Misfits Boxing, had a backup opponent lined up in case the first opponent dropped out.

Just now KSI responded to the fans who criticized him for fighting a rapper on August 27,

Just wanna say that at the end of the day, one of the main goals of this first fight was to get rid of ring rust. I wanted to prove to myself that I’m a better boxer than I’ve portrayed in the past. If you wanna see it, fine. If not, fine. I’m still doing it anyway.

There are still many good fights on this card that I’m excited to see. We are the only YouTube boxing event happening this summer. We’ve had many things try to disrupt this event but still we stand. This is a long-term play, and I’ll happily take a small L now for a Big W later.

Bro surely fighting someone with zero ring experience won’t even really help you get rid of ring rust, it won’t prepare you for any opponents in the future who have actually got fight experience. I respect you Jj but surely there’s SOMEONE other than swarmz.

Paul, on the other hand, didn’t waste any time criticizing KSI’s choice of opponent. He said on Instagram, “What KSI just did there, he is battling one of his pals, is absolutely absurd.” “Talk about getting paid to dive; he is battling a rapper who is his friend, with whom they have collaborated on songs, but who has never engaged in combat.

“What the f*** is going on? The man is wearing a t-shirt on the fight poster, and they don’t even have a photo of him without a shirt on. Even KSI’s fans are complaining that the event should be free and that they are trying to sell their tickets online.

Fan’s reaction to KSI vs Swarmz

Few of the fans furious comments against KSI vs Swarmz,

More about KSI vs Swarmz boxing fight is on the way.

Chloe Wheatman’s Mysterious death: What happened? Cause of death Explained