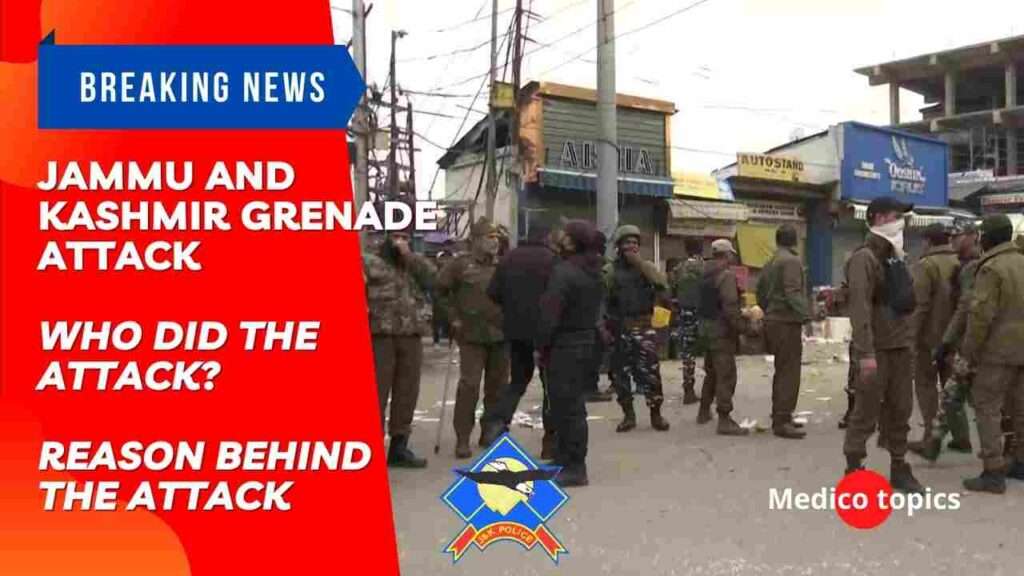 Terrorists are not deterring from their nefarious antics in Jammu and Kashmir. On Sunday, terrorists launched a grenade attack targeting the security forces in Amira Kadal market Srinagar. According to the Srinagar police, one civilian was killed in the attack while 24 people, including policemen, were injured. 24 include 23 civilians and one policeman. All the injured have been admitted to the hospital. Of these, the condition of a policeman and a girl is said to be critical. Let us tell you that after the attack, there was chaos in the whole area. After the attack, the area has been cordoned off and a search operation has been started to find the terrorists.

This nefarious conspiracy of terrorists is increasing continuously in the valley. Even before this, terrorists have carried out such incidents in different districts of Jammu and Kashmir. Many have also been caught. In fact, in Jammu and Kashmir, the security forces are constantly engaged in the elimination of terrorists. Continuous search operations are being conducted at different places and terrorists are being piled up. Due to this, the terrorists are furious and are carrying out their conspiracies through such attacks.

How did the Jammu and Kashmir Grenade Attack Happen?

On Sunday, terrorists launched a grenade attack targeting the security forces in Amira Kadal market Srinagar. The grenade explosion happened at the Sunday market when there was a mad rush of the crowd. The grenade busted in the center of the market. This was planned by the terrorists in order to injure as much as civilians in the area. Srinagar police on the hand in their Twitter page said,

In light of the terrorist act of grenade throwing in a busy Sunday market near Amira kadal bridge today evening, all civilians are required to be vigilant and report any suspected activity.

Who did the Jammu and Kashmir Grenade Attack?

So far now there is no absolute update on who did the grenade attack. Srinagar police took charge and secure the area in order to prevent further attacks.

According to Danish Manzoor, editor of Newsweek, ISI terrorists are the sole reason behind this attack. In his tweet he said,

The coward terrorist vermin are at it again.

Their Pakistani handlers are getting frustrated with the tightened security grid and expose their real face by hurting non-combatants as well.

The #ISI has always been against peace & Anti-Jammu & Kashmir. Always.

The exact reason behind the grenade attack is not yet to be released or no other terrorist organizations officially claimed anything. But twitter rage says that this attack happened to demolish the peace of the Jammu and Kashmir people. Also to perish as much as security forces they can.

Jammu and Kashmir: Several injured including police personnel in a grenade attack at Amira Kadal market, Srinagar. All the injured have been shifted to hospital: Police pic.twitter.com/mfhDhlKD2v

One grenade attack took place in busy market near Amira kadal bridge. In this terror act, one old man from nowhatta has succumbed to injuries while one girl is critical. In this attack, 24 other persons incl 23 civilians & 1 cop have received splinter injuries & are out of danger

A day earlier, security forces had busted a terrorist hideout during a search operation in Jammu and Kashmir’s Kishtwar district and recovered a huge cache of arms and ammunition from there. Two under-barrel grenade launchers, one AK-47 magazine, 48 bullets of INSAS rifle, 10 rounds of AK-47, 38 rounds of 9 mm weapon, two rounds of Chinese pistol, a knife, and another sharp weapon were recovered from the hideout of the terrorists. it was done.

Earlier on Friday, three Lashkar terrorists were arrested in Budgam, Jammu, and Kashmir. Jammu and Kashmir Police have said that the security forces recovered incriminating material including arms and ammunition from the possession of terrorists in Khudpora. Earlier, in Handwara district, the security forces arrested an injured terrorist with arms and ammunition during the encounter. Let us tell you that such incidents keep happening every day in Jammu and Kashmir.

[…] Who did the Jammu and Kashmir Grenade Attack? Reason Behind attack […]

0
Reply
How did Denis Kireev die? What happened? Cause of death revealed -

[…] Who did the Jammu and Kashmir Grenade Attack? Reason Behind attack […]