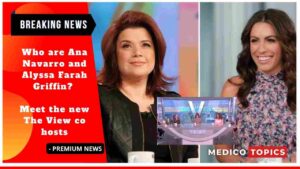 Alyssa Farah Griffin and Ana Navarro have been announced as ‘The View’s’ new co-hosts for season 26. The news was made live on air by the daytime chat show that won an Emmy. Let’s see who are the new The View co hosts.

“‘The View’ is a legendary and unrivalled forum for women from many backgrounds to express their viewpoints and views. We’ve been courting for a while, but now it’s official,” Navarro told ABC News. “I enjoy living in Miami and enjoying my time on the show. I’m glad I’ll be able to perform both. We appreciate the support of ABC News, “The View” family, and devoted viewers.

who are the new The View co-hosts?

Alyssa Farah Griffin and Ana Navarro were introduced as the panel’s co-hosts on “The View.”

The two Republicans were welcomed as co-hosts live on the midday chat show that has won multiple Emmy Awards. They join Joy Behar, Sunny Hostin, Sara Haines, and moderator Whoopi Goldberg as hosts.

Farah Griffin will occupy the conservative seat at the Hot Topics table after making 29 appearances in Season 25. The only individual to ever hold each of these posts, the communications strategist served as the chief spokeswoman for the president, vice president, and secretary of defence from 2017 to 2020. She is also a board member of the American Conservation Coalition and the recipient of the Secretary of Homeland Security’s Award for Distinguished Public Service.

After joining the programme in 2015 for Season 19 as a contributor and making frequent appearances on the panel since November 2018 as a guest co-host, Navarro is now officially a co-host.

She is a Republican analyst and political strategist with knowledge of problems pertaining to Latin America, Florida, and Hispanics.

Navarro will continue to commute from her home in Coral Gables, Florida, where she resides with her husband, Al Cardenas, and their small dog, Chacha, even if the show is situated in New York City.

What did Farah Griffin say?

Farah Griffin told ABC News, “I couldn’t be more honoured and happy to join the ladies of “The View.” “The programme pioneered the path for women to speak out on television.”

I’m proud to represent the conservative viewpoint at a time when our nation is so divided, frequently along partisan lines, she concluded. “I want to be an example of what our elected leaders all too frequently fail to do: learn from others, argue civilly, and concentrate on coming up with effective solutions for our nation.

How is the Second co-host selected?

The audience was informed that a co-host will be announced on Thursday, but viewers were taken aback by the additional announcement that identified a second co-host. Six people will now sit on the panel.

Navarro, in contrast to Griffin, has been a frequent guest on television news programmes for almost 20 years.

The Republican from Miami has contributed to “The View” since 2013, and for the previous four seasons, she served as a guest co-host, typically joining the panel once per week.

Now that she is a permanent co-host, it is unknown how frequently she will appear on the programme, but according to the Daily Mail, she has signed a multi-year contract with ABC. She will still be permitted to keep her second job as a CNN talking head as part of the agreement.

Ana has had a lasting influence on “The View” ever since she first sat down with us, according to Teta. She is a strong, independent thinker with sharp insight in addition to being incredibly quick-witted and witty. She has our warmest formal welcome as a co-host.

Griffin, a 1989 Los Angeles baby, is the daughter of two journalists. Joseph Farah, her father, was an editor at the Sacramento Union in Northern California before serving as executive news editor at the Los Angeles Herald Examiner.

Her father is of Lebanese and Syrian ancestry. Joseph established the far-right conspiracy website WorldNetDaily in 1997. It is noted for promoting conspiracies, including questions regarding President Barack Obama’s citizenship to the US.

Griffin worked for her father both while she was earning her bachelor’s degree in journalism and public policy at Patrick Henry College and afterward as the “special Washington reporter.”

With Alyssa, “we have found the appropriate match and a welcome addition to the programme,” Teta said. “We promised to take a little time to fill the seat. She is willing to share her distinctive political experience and brings a strong conservative perspective, and she can hold her own in contentious discussions with co-hosts and guests from both sides of the political spectrum.

What positions did Griffin hold?

Writing for World Daily Net was where Griffin began her journalism career. She accepted Congressman Tom McClintock’s offer of a media internship in 2010 and worked as an associate producer on “The Laura Ingraham Show” for a full year.

She lectured on the youth vote while travelling the nation as a spokeswoman for the College Republican National Committee during the 2012 presidential election cycle.

She started out as Congressman Mark Meadows’ press secretary before moving up to communications director two years later.

She later rose to the position of director of communications for the House Freedom Caucus under Meadows and Jim Jordan.

Griffin was appointed press secretary and special assistant to the president for Vice President Mike Pence in September 2017.

Who is Anthony Doorhy? How did he die in Sligo waterfall? Explained