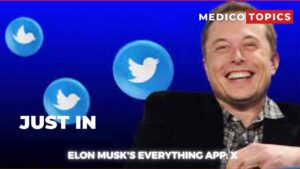 Elon Musk is planning to create an Everything App and he called it ‘X’. It is something similar to the WeChat App of China. The billionaire has stated that he wants to increase Twitter’s utility and so he was on the plan to develop X. Let’s see What is Musk’s Everything App X and How good will it be for the future generation.

Musk stated that his buying of the social media site Twitter is a catalyst for the development of X, potentially reducing three to five years off the project’s timeline.

He has expressed thoughts on improving Twitter, saying he wants it to look more like WeChat and TikTok, the popular video-sharing app owned by ByteDance Ltd. that has gained popularity in the US. He also made reference to the so-called “super apps” that are popular in some parts of Asia and allow users to access a range of functions from communications to car calling using a single smartphone application.

X App is regarded as All in Podcast which deals with the use of all services in a single app. Users can access a variety of services through the X-app, like texting, social networking, video sharing, peer-to-peer payments, booking a car, and online shopping.

Elon Musk reversed the decision in his negotiations with Twitter earlier this week and made a $44 billion buyout offer. Moreover, he proposed a concept for creating a social media platform where people can access everything.

Buying Twitter is an accelerant to creating X, the everything app

X is going to be a one-stop shop for a consumer’s daily digital demands. Musk promised a group of affluent investors, including Larry Ellison, a fivefold rise in revenue to $26.4 billion by 2028 just before he attempted to halt the purchase of Twitter. He could achieve 931 million daily users, roughly similar to the Chinese mega app in six years by making Twitter into a WeChat for the free world. He could also establish a payments business that can generate $1.3 billion in income annually by that time, reducing Twitter’s dependency on advertising.

Twitter probably accelerates X by 3 to 5 years, but I could be wrong

Musk stated that the US requires a super app that integrates social networking, chat, video games, payments, and the All-In podcast. According to an article by Scott Galloway, a professor of marketing at New York University and tech podcast co-host of “Pivot,” Asian people use the internet for using mega applications.

A month later, Musk reinforced that idea at a town hall meeting with Twitter staff. Because WeChat is so practical and useful for daily life in China, “you literally live on WeChat,” according to Musk, “and I think if we can achieve that, or even come close to that at Twitter, it would be an incredible success.” According to CNN, he also predicted that Twitter’s user base, which now stands at slightly over 200 million, could increase to “at least a billion people.”

X app will have several features that will help every user. It would presumably affect every aspect of our digital life, but would probably provide many of the same services, such as

Elon Must and his X universe

In 1999, Musk co-founded X.com, an online bank that subsequently merged with another business to become PayPal. He bought the domain name X.com back from PayPal in 2017 for an undisclosed fee.

In the meantime, Musk established SpaceX in 2002 and introduced the Model X in 2015 through his manufacturer Tesla.

It would be difficult to develop a “super app” with a US focus in the US, especially considering the number of powerful players with comparable goals. For instance, Facebook and Instagram have made e-commerce pushes, and Snapchat has dabbled with peer-to-peer payments. Walmart is entering the world of online banking, while Amazon has expanded into many areas of daily life.

Who is Ji Min Sha? Why did he murder Varun Manish Chheda? Covered

Who is Hilary swank married to? Who is Philip Schneider? Covered