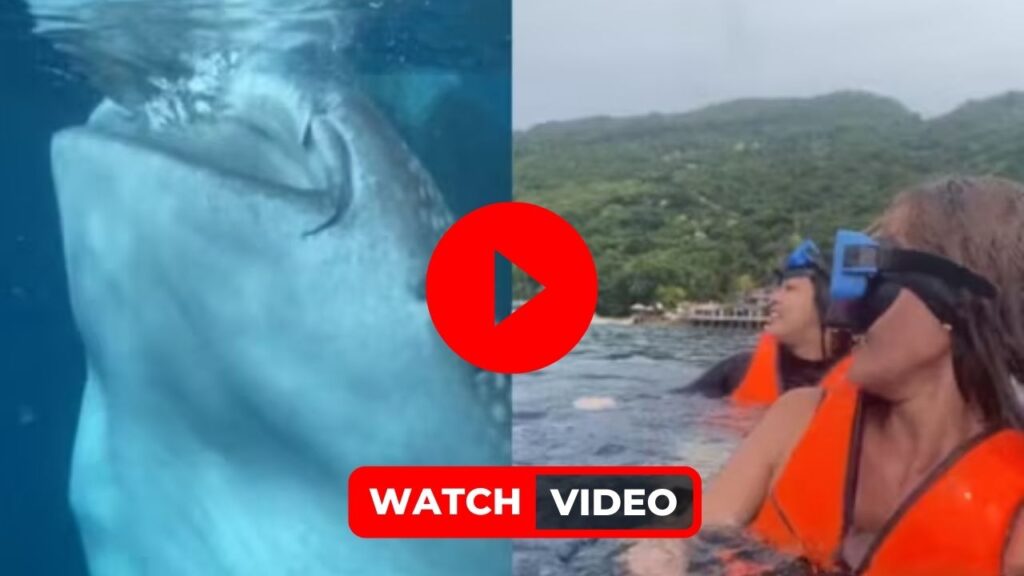 Two women are scared as the Whale shark gurgles large quantities of water. Twitter video is now trending where the Whale shark is seen gurgling water. Let’s see more about the trending video and what happened in detail.

In the video shared by the account named, Overtime, the White shark is seen gurgling water. Two women wearing life jackets are seen swimming in the sea at the beginning of the clip. From a distance, a man may be seen rowing a boat.

Although the women appear to be having fun in the water from the perspective of the viewer, the latter section of the film exposes a very different and somewhat dangerous scenario.

Soon, the camera cuts to the underwater environment, where, much to the shock of social media users, a huge whale shark can be seen gurgling copious amounts of water and creating waves on the surface. It is assumed that when the whale shark struck the boat, the two women may have fallen off the board.

The two women appear to have experienced a bolt from the blue at the sudden encounter, although the enormous fish does not appear to be in attack mode. I’m never going in the ocean again, a tweet shared by Overtime reads.

Whale sharks are regarded as the biggest fish in the ocean on the entire planet. These speckled aquatic creatures are normally slow-moving and quite friendly, unlike dangerous sharks. Whale sharks are not harmful; in fact, they are just the contrary.
They are one of the few shark species that is completely harmless to humans.

Whale sharks often don’t attack people, but it’s still not a good idea to approach them. However, as the world’s largest fish, they are extremely powerful and capable of toppling boats.

A similar occurrence occurred when two people were flung into the water after a whale shark struck their boat. On December 15, the trending video was posted to Twitter by Overtime.

The Twitter community flocked to the comments section as soon as the video appeared on the microblogging network to express their thoughts on the bizarre encounter.

Calling them harmless, one said, “Those are whale sharks and are gentle giants. You can snorkel and see them in Cebu Philippines… Don’t worry, they won’t bite you.”

this is even funnier knowing how chill whale sharks are. my dude just came up to gulp some surface water https://t.co/4aKDrctoHp

Another person said, “Lol whale sharks aren’t dangerous, but I’d freak out too. The third individual wrote, “This video is fake… Where is the bottom of the boat? And light refracting from the gray of the water… too blue,”

Waking up for a sip of water at 4am https://t.co/FctRTcqNOD

Even though it is unclear whether the viral video is real or not, it is undoubtedly amusing. The Twitter post has received more than 227.9k likes and over 11 million views so far.

Reminds me of the guy that got swallowed by a whale while lobster diving. https://t.co/dGuk8SpQE4

IMAX vs 4DX – Differences & Which one is better? – A complete Overview

R’Kayla Briggs Missing: What happened to the 11 year old? Everything we know so far