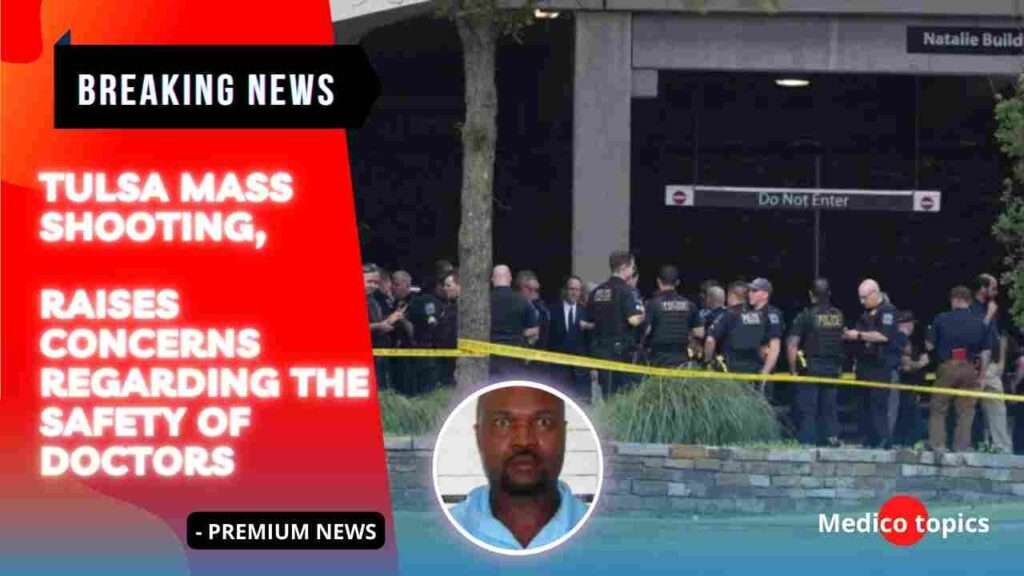 According to officials, four people were murdered in a shooting spree at a hospital in Tulsa, Oklahoma. Let’s see what happened, who the suspect and what was the reason behind the Tulsa Mass Shooting.

What happened in Tulsa Hospital?

Police reported Thursday that a 45-year-old man killed four people and himself at a medical facility in Tulsa, Oklahoma, on Wednesday after complaining about back pain after surgery.

Police identified the suspect as Michael Louis, also known as Michelet Louis, according to his relatives.

“Tulsa Police contacted and confirmed it’s my uncle,” Louis’ niece texted Thursday morning. “We are devastated.” She requested that her name not be included in the narrative, noting the “heinous” nature of the crime. “I don’t want to be affiliated with it because I’m horrified,” she told The Daily Beast.

Why were the Doctors killed by the patient?

Tulsa Police Chief Wendell Franklin stated at a press conference Thursday that Dr. Preston Phillips, an orthopedic surgeon who performed back surgery on Louis last month, was shot and died in the incident. According to Franklin, Louis was released from the hospital on May 24 but continued to complain about his pain.

According to Franklin, Louis obtained a.40-caliber Smith & Wesson semi-automatic pistol from a local pawn shop on May 29.

According to police, a second orthopedist, Dr. Stephanie Husen, was murdered in the incident. Authorities identified the other two victims as Amanda Glenn, a medical center receptionist, and William Love, a patient.

Franklin said that Love and Glenn “stood in the way, and Louis shot them down.”

The Warren Clinic Orthopedic Surgery and Sports Medicine on the second floor of the Natalie Medical Building, near St. Francis Hospital, left a letter outlining the purpose for the attack, according to Louis’ niece, who told The Daily Beast.

Officials refused to reveal what it said, but Franklin subsequently revealed publicly that it was found on Louis. “He walked in with the aim to kill Dr. Phillips and everyone who went in his way,” according to the message. “He blamed Dr. Phillips for the post-surgery suffering,” Franklin claimed.

Phillips, a specialist with decades of expertise, was the Warren Clinic’s section chief. He received his medical degree from Harvard in 1990 and focused on spinal diseases, joint repair, and surgical treatments.

Patients complimented him online as “thorough,” “gracious,” and “kind,” and a local charity honored him on their Facebook page for sending several containers of knee replacement prosthetics to Togo.

When reached by phone on Wednesday evening, Phillips’ children and wife, Melody, declined to talk with The Daily Beast.

Dr. Ryan Elizabeth Parker, associate chief medical officer of St. Francis and a practicing emergency physician, claimed at Thursday’s news conference that she had lunch with Phillips on Tuesday.

Parker stated, “I know that all of my colleagues got into medicine to serve people.” “…During catastrophes like these, we are meant to be the ones who care for others. It’s inconceivable to me that our caretakers were the victims. They died while doing good. They were killed in the course of duty.”

Parker said she awoke Thursday hoping the shooting was a “bad dream.”

“However, this is the reality of our world right now,” she explained. “Our world, including our St. Francis family, is shattered tonight.” We were just beginning to handle the pain and feel that being on the frontlines of a pandemic had left us with when this tragedy occurred.”

According to public records, Louis is a resident of a Muskogee residence where Tulsa police ordered local policemen to look for a suspected bomb on Wednesday night, citing the hospital incident.

When will it end! Deeply saddened to hear of tragic loss of Preston Phillips, MD who I knew during his days as a @harvardmed student. Remarkable spine surgeon and man called home to soon. We can’t continue to ignore. My thoughts and prayers to family & friends. #StopGunViolence pic.twitter.com/P93pZWLmxZ

According to officials, the residence was evacuated Wednesday night, and neither Louis nor his wife, Edith Lubin, could be reached by media or concerned relatives.

“It’s simply shocking. If he had murdered himself. But it’s the innocent people who are causing me pain,” Louis’ niece told The Daily Beast.

When approached by The Daily Beast on Wednesday night, Louis’ relatives expressed shock that he was involved.

“This is really insane. This is shocking… Nobody in our family, and I mean nobody, has this kind of behavior. “No one,” the niece explained.