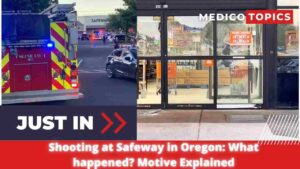 Police reported that three individuals, including the alleged shooter, died in the attack that took place Sunday night at a grocery store in Bend, Oregon. Let’s see the Shooting at Safeway in Oregon.

Shooting at Safeway in Oregon

After an attack Sunday night at a grocery store in Bend, Oregon, three individuals, including the alleged shooter, died, according to authorities.

About 9:15 p.m. local time, authorities tweeted the number of fatalities.

Earlier, a representative for St. Charles Bend Medical Center claimed that one attack victim had been transported there and was already dead when they arrived. Another patient was said to be doing well.

A possible activity was reported at the Safeway at the Forum Shopping Center in northeast Bend, according to NBC station KTVZ, and police were summoned there shortly after 7 p.m., according to spokeswoman Lisa Goodman.

What did the police state?

The gunman, according to police, then entered the Safeway and opened fire on at least one person close to the west door. Police stated that person was taken to a nearby hospital where his or her death was later determined.

According to authorities, the guy persisted inside the supermarket and shot and killed at least one more victim.

When do the police arrive?

When police arrived at the scene of the shooting, they entered the Safeway and discovered another person deceased inside the establishment who was thought to be the shooter. Police claim that no rounds were fired by the policemen.

We have no evidence of an additional shooting at Reed Pub. We continue to investigate and deal with this incident and your patience is appreciated.

The deadly shooting is still being looked into.

People’s reaction to Shooting at Safeway in Oregon

#BREAKING At least three people are dead following a #shooting at a #Safeway supermarket in Bend #Oregon. Eyewitnesses say that “dozens of shots” were fired starting at about 7:00 p.m. The situation no longer believed to be an active shooting.
Bonnot Galaxy said,
There was a Mass Shooting tonight in Bend, Oregon and you probably won’t hear about it. Person started shooting in a parking lot and went into a @Safeway, went aisle by aisle and killed at least two. He’s dead too
Keiko said,
Following a shooting at a Safeway in Bend, Oregon tonight, a number of Twitter accounts are tweeting rumors of a second shooting elsewhere. Bend PD saying there is NO second shooting location. Sharing unconfirmed reports of shootings spreads fear unnecessarily.
Louise Anne Melton said,
Bend Oregon Yet another shooting happening in my town at Safeway. Details are sketchy but once again the NRA wins. Some folks have lost their lives and others have lost their hearts. And many of us have lost our home. We cannot allow this to happen No shits given.
Leah said,
there was a shooting down the street from my neighborhood just a little bit ago at a safeway in bend oregon.. i’m currently on lockdown with my family.. this is terrifying
Liz O’Connell said,
Scary news happening near my new home. Shooting in a Bend, Oregon Safeway happened just after 7 p.m. And now unofficial reports of second shooting at a pub in the area. Stay safe out there.
KEEP READING,
Who is Andrew Tate? Meet the misogynistic online guru for incels banned from all social medias
How did Steven Hoffenberg die? Jeffrey Epstein Associate cause of death
Follow us on Twitter to get instant notifications on the latest news.
kavi