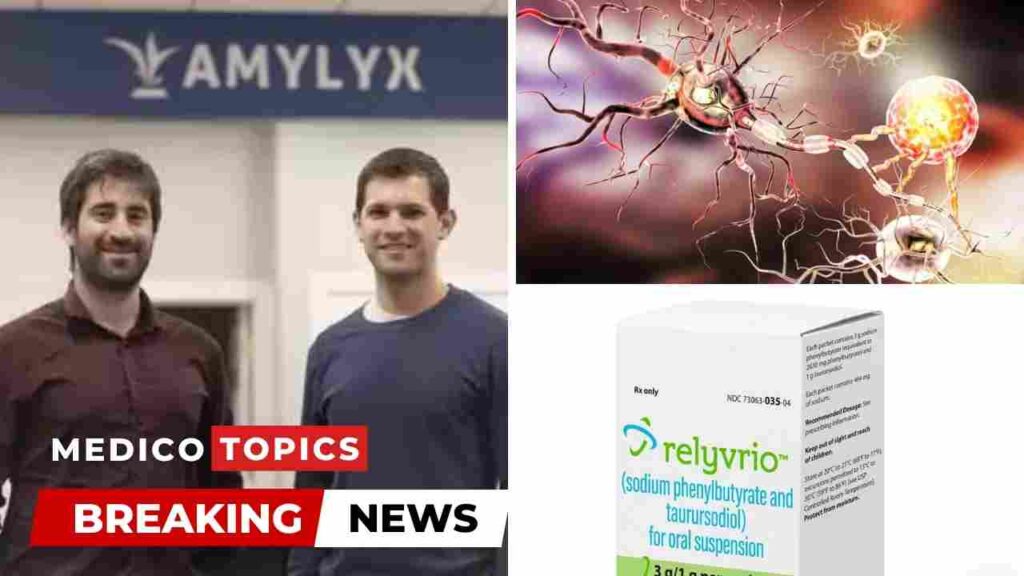 RELYVRIOTM for the Treatment of ALS has Been Approved by the FDA, according to Amylyx Pharmaceuticals. Let’s see regarding Relyvrio Approval, how much does it effectively against ALS and its Side effects in detail

Relyvrio (sodium phenylbutyrate/taurursodiol) has been given the go-ahead by the American Food and Drug Administration to treat people who have ALS, also known as Lou Gehrig’s illness.

Billy Dunn, M.D., director of the Office of Neuroscience in the FDA’s Center for Drug Evaluation and Research, stated that “this clearance provides another significant therapy option for ALS, a life-threatening disease that currently has no cure.”

The FDA encourages the creation of new ALS medicines.

According to Amylyx, patients who maintained taking the medication lived around 10 months longer than those who stopped using it.

An open-label extension showed that ALS patients had roughly six more months before being hospitalized, needing a ventilator, or passing away compared to the control group.

In March, the first advisory committee concurred with the FDA reviewer’s assessment that there were concerns regarding Relyvrio’s efficacy and that it would be preferable to wait for the findings of an ongoing, larger trial, which are currently anticipated to be published in 2024.

An uproar from ALS patient groups, who vehemently argued that it would be better for patients with short lifespans to take a chance on a novel treatment.

Because that appears to be safe, even though it may be shown to be unsuccessful down the line, followed that six-to-four vote not to recommend clearance.

They argued that the alternative, delaying a medication that later proved effective, would deprive some patients of the chance to delay the onset of impairment and death.

In response to the criticism, the FDA took the highly rare step of calling a second advisory committee meeting earlier this month. This time, despite strong objections from patients and physicians, the vote was reversed by a seven to two margin.

Relyvrio is still under scrutiny by the FDA, which stated in a summary memorandum released Wednesday that there is “some lingering doubt regarding the evidence of effectiveness.”

Relyvrio’s apparent safety and the limited efficacy of the two ALS treatments that have been approved by the FDA—Radicava and oral riluzole—mean that “this level of uncertainty is acceptable in this instance and consideration of these results in the context of regulatory flexibility is appropriate,” the statement continued.

The verdict was joyfully received by the ALS Association, which hailed it as “a remarkable development in the fight against ALS.”

The organization used funds earned by the 2014 Ice Bucket Challenge to contribute $2.2 million toward the creation and study of Relyvrio.

Relyvrio hasn’t yet been introduced in Canada under the Albrioza brand name, but it has already received conditional approval there while Amylyx continues to negotiate prices.

Also unknown at this time are the pricing plans for the US, though these might be disclosed in an investor update later today.

According to Margaret Olinger, a chief commercial officer of Amylyx, “Our objective right now is to make sure that adults with ALS in the US who have received a prescription for Relyvrio may obtain it as promptly as possible.”

The outcome of the 600-patient PHOENIX research in two years will determine whether the product remains on the market in the US and Canada.

A decision on the drug’s clearance was also requested in Europe in February, with a decision deadline of early 2023.

ALS, or amyotrophic lateral sclerosis, is a neurodegenerative disease.

It affects nerve cells in the brain and spinal cord.

The nerve cells that regulate voluntary muscles are attacked and eventually die from the rare disease ALS.

Movements like chewing, walking, breathing, and talking are produced by voluntary muscles.

ALS is a degenerative condition that worsens with time.

The majority of cases end in death from respiratory failure, usually three to five years after the onset of symptoms.

Every year, about 5,000 Americans receive an ALS diagnosis, and there are already 20,000 people in the country who have the illness.

How to consume Relyvrio?

By mixing one packet with 8 ounces of room temperature water, Relyvrio can be consumed orally.

A feeding tube can also be used to administer it. For the first three weeks, a daily dose of one package (3 grams of sodium phenylbutyrate and 1 gram of taurursodiol) is advised.

The dosage is increased to one packet twice daily after three weeks.

You can take the drug before a snack or meal.

In a 24-week, multicenter, randomized, double-blind, placebo-controlled, parallel-group research, the effectiveness of Relyvrio for the treatment of ALS was proven.

Relyvrio or placebo was randomly administered to 137 adult ALS patients as part of the study.

In comparison to patients who received a placebo, those who were treated with Relyvrio had their daily functionality diminish at a slower rate.

In addition, patients who initially took Relyvrio as opposed to those who initially received a placebo showed a greater overall survival in a post hoc, long-term examination.

Side effects of Relyvrio

The most frequent side effects of Relyvrio were upper respiratory tract infections, diarrhea, and abdominal pain.

A bile acid called taurursodiol is a component of Relyvrio, which can make diarrhea worse in those with bile acid circulation issues.

Before taking Relyvrio, these people should think about speaking with a specialist.

Additional information on Relyvrio hazards is provided in the prescribing material.

The FDA designated this application for Priority Review.

Additionally, it was given the orphan drug classification, which offers rewards to help and promote the development of medications for uncommon disorders.

Relyvrio was approved by the FDA for Amylyx Pharmaceuticals Inc.

(1/2) BREAKING NEWS: @US_FDA approved AMX0035, a new treatment that has been shown to slow progression of #ALS and extend life. This is an amazing development in the fight against ALS, and a meaningful win for the entire ALS community who worked tirelessly to make this happen. pic.twitter.com/Kck0tp1nSJ

What happened to Alison Russo-Elling? Who stabbed the FDNY paramedic? Explained

How did Shehzad Azam die? Pakistan Cricketer cause of death Explained